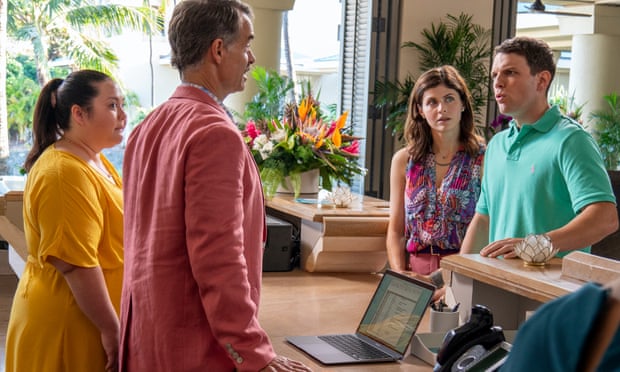 This year has had a bumper crop of unmissable TV. With an array of platforms to view shows on, it can be difficult to keep up. Below are The Boar’s favourite TV series of 2021.

An eccentric cast of characters come together in a luxury resort in Hawaii to have the holiday of a lifetime. What could possibly go wrong? The answer: everything. A sharp social satire exploring inequality and class division, HBO’s The White Lotus is unlike anything that has hit our screens in the past years. Over the course of its six episodes, chaos unfolds, and guests’ petty complaints ultimately culminate in murder. But where The White Lotus truly shines is in its excellent characters: each one is crafted so expertly they feel more like real-life people than characters. What’s more, despite their noticeable flaws, they are so painfully relatable that they are impossible to hate. No other show this year has captured the complexities of contemporary society in such a witty and entertaining way.

Russell T Davies once again has proved himself as one of the best TV writers of our times with his latest series, It’s a Sin. His poignant, heartbreaking but also joyous and flamboyant series shed light on the AIDs crisis of the 1980s. It took us through the unfolding of the crisis: the rumours and disbelief of a disease affecting gay men, the prejudices and shame surrounding the disease, and the devastating loss of so many lives. The viewer is immersed into the vibrant lives of each of the main friendship group, as we watch their lives irreversibly change by this cruel disease. It is a masterpiece and an absolute must-watch – I would implore anyone who has missed it this year to watch it, and it is still available on All4. It’s a Sin will not leave your thoughts for a long time after watching.

Taskmaster has been one of the best shows on the TV for years, but it pulled something special out of the bag in 2021 – its eleventh series featured the incredible Mike Wozniak. I, like many others, didn’t know him before this, but he swiftly won the nation’s hearts with a mixture of mild-mannered kindness and surreal genius. Every moment was a classic, from his desire to carry plates while hoverboarding to his cartoon-esque fall in a sand bunker. And his attempt to fart is one of the funniest things I’ve ever seen. In an often-downbeat year, this was the show we all needed to put a smile on our faces. Tick tock, 2021 was Woz O’Clock.

The Netflix limited series Maid follows Alex and her two-year-old daughter as they flee from domestic violence in rural Washington state. Alex struggles as a single mother and navigates her way through homelessness, poverty, and generational abuse. Maid is raw and candid, and is a deeply emotional journey that paints an in-depth portrait of Alex as she tries to provide for her daughter by working as a cleaner. Maid is a depiction of the push and pull effects of domestic and financial abuse on an individual. Be prepared – thi is a heart-breaking watch, as every episode shows Alex desperately attempting to break free of a vicious cycle of abuse to fight for a better life for her daughter.

Few shows in 2021 achieved such international acclaim as Squid Game. The Korean thriller, centering on a competitive death-game whose entrants compete for an end to their deep financial debts, flooded social media with hype, memes, and best-character wars, also becoming the most-watched Netflix show of all time. The show stands out for its superb acting, piercing tension, and its creative twists on the established genre. Lee Jung-jae shines as the main character, giving the audience somebody to root for from the off, and providing balance to the cut-throat tactics of the rest of the “players” – the entire cast is convincing, along with their respective motivations for winning. Every episode is gripping and polished, with just the right balance of atmosphere and action. Squid Game is one of the most memorable TV shows in recent memory, paving the way for more Korean media to earn its appreciation in the UK.