If there is one thing Less Than Jake know better than anything, other than making joyously fun ska-punk bangers (think pop-punk but with saxophone and trombone), it’s life on the road. Their biography on Spotify estimates they’ve ‘travelled a block or two short of the Van Allen Belts’ in a career spanning almost thirty years. They’ve played Warped Tour (RIP) more than any other band except Simple Plan. Obviously, with the pandemic sweeping in and taking all possibility of touring away with it like the Grinch’s crueller, punk-rock hating evil twin, Less Than Jake, like every other band, did not have the 2020 they imagined.

“Touring is our bread and butter,” says bassist and vocalist Roger Lima. “It’s how we pay our bills and pay all our crew. For those first few months of [lockdown], I surprised myself [with] how much I was addicted to the live show energy and I didn’t really realise it. It’s been like someone pulled out a rug from underneath me, that’s for sure. Like, I’ve been going to shows or playing shows every day since I was nineteen so it’s a crazy thing to have had almost a year of no shows. It’s a life change.”

The complete inability to tour is also partially responsible for why the band’s ninth full-length release Silver Linings arrived as an early Christmas present on 11th December, despite being in the can for almost a year. Originally intended to be released in the spring, the release date was pushed back again and again…and yes, you guessed it, it was delayed again.

What is evident from listening to Silver Linings is that it represents, while not a revolution, an evolution

“We really didn’t think this would go on for so long so the first time we postponed it was like ‘Okay, we’ll postpone it a few months, no big deal.’ And then the date got a little closer and things didn’t really get better so we had to postpone it again.”

When touring hadn’t resumed by October, the Florida punks had to dig their heels in. “We were like ‘We have to get it out this year’. It was the final line in the sand. It was going to come out on 11th December, that was going to be the day, and we [had] to live with it.”

In all truth, Less Than Jake were itching to invite their fans into what Roger considers a “new era” for the band. They don’t sound like any band other than Less Than Jake, and that was always going to be the plan, but what is evident from listening to Silver Linings is that it represents, while not a revolution, an evolution.

Change was going to be inevitable given the changes within the Less Than Jake camp in the last few years. Drummer and primary lyricist Vinnie Fiorello decided to step back from touring in 2018 and later left the band permanently, replaced by the band’s long-time friend Matt Yonker.

“It’s a crazy thing because Matt has been working with the band for almost twenty years now,” says Roger. “He started off as our merch guy, selling shirts, then he moved his way up to tuning guitars and stage managing and then he was doing a lot of live sound. Then he was actually managing the day to day life of the band, and now he’s sat in the drummer’s seat, so it’s [been] a crazy journey for him!”

“We wanted the songs to encapsulate that sort of dichotomy within the band, where the songs feel happy but sometimes the lyrics are a little darker”

Roger speaks about how natural a transition it was for Matt to be welcomed into the fold and gel with the band’s sound. They never considered anybody else to fill the vacancy – circumstance ensured they didn’t need to.

“When [Vinnie] said he wasn’t going to be touring with us anymore, we had a show only three weeks away. We had a pretty big festival. We literally just called Matt and said, ‘Hey dude, you’re on deck!’”

Matt is no stranger to the drum kit either, having started his career in ‘90s pop-punk band Teen Idols, who Roger cites as one of his favourite bands. “He’s a very hard hitter,” Roger remarks. “He plays a little groovier than some kinds of punk-style bands and he definitely brought that finesse to some of the tracks. I think if you listen to this band and you listen to this record then you’ll notice some drum things and be like ‘Oh, I haven’t heard anything like that’”.

Roger, along with his bandmates Chris DeMakes (co-lead vocals, guitar), Buddy Schaub (trombone) and Peter Wasilewski (saxophone), were now sharing lyrical duties and worked together as a team to fit words to music. This wasn’t as difficult as it might have appeared on paper – “These songs came out very naturally,” comments Roger.

Silver Linings is best summed up as a record about life, its joys, its moments of despair and everything in between

“We wanted the songs to encapsulate that sort of dichotomy within the band, where the songs feel happy but sometimes the lyrics are a little darker, maybe talking about heavier stuff, or something personal. The whole idea is to try and find silver linings and live in those positive moments when you’re on the uptick, so to speak.”

True to his word, Silver Linings is best summed up as a record about life, its joys, its moments of despair and everything in between. ‘Anytime and Anywhere’ celebrates the joy and comfort of long-time love, while ‘Bill’ is a letter of thanks to a “trail-blazing” friend. On the flipside, ‘Dear Me’ laments personal dissatisfaction (“Dear me, I’m not content/ All these years and my nerves are spent.”) and ‘The High Cost of Low Living’ is an ode to blowing all your money on a Saturday night when it’s hardly spent any time in your bank account (which plenty of students can surely relate to).

There’s one more thing Roger hopes for when fans get Silver Linings into their ears. It is this simple wish: that they fight the Spotify-induced tendency to listen to one or two songs from an album and decide instead to listen to the entire album from start to finish.

“People consume music so differently these days,” he says. “Everything’s sort of single based and I feel like there’s a value in that whole album experience and I feel like Silver Linings does have that, where you listen to the whole thing that has its peaks and its valleys and takes you on a bit of a journey and when you get to the end of it you feel like you’ve got somewhere. It used to be different when you get the album in your hands and you would experience the whole record and now people put it on their phone and go off and do whatever they’re doing. They’re not as immersed in it. I think that’s kind of a shame. I think that some of my favourite music is album-based, where I’m experiencing the whole thing. I just hope that people take the time to listen to all the songs and hear the whole thing as one thing rather than just the singles. Everyone’s got too short of an attention span out there!” 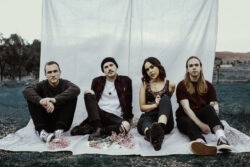