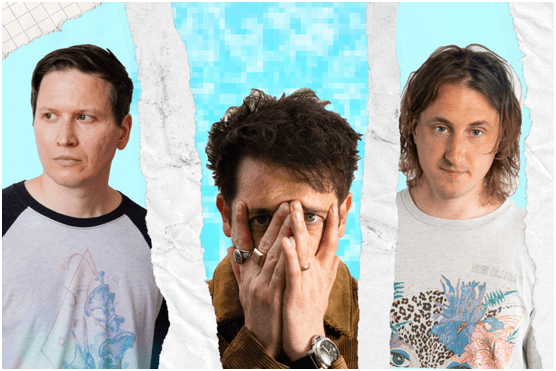 As The Wombats were about to start recording their fifth album, Fix Yourself Not the World, the UK went into its second lockdown. With lead singer and frontman Matthew ‘Murph’ Murphy in LA, bassist Tord Øverland Knudsen in Oslo, and drummer Dan Haggis in London, recording the album in person was never going to be an option. But instead of putting everything on hold and postponing it, they decided to record it remotely. The result? A Wombats record unlike any of its predecessors.

All too often, The Wombats have been unfairly relegated to the category of ‘generic indie’ – a genre categorised by catchy upbeat tunes and simple lyrics. And while this is exactly what propelled the trio to fame during the mid-2000s, on Fix Yourself, The Wombats balance the perfect formula between freshness and familiarity. This change of sound, while propelled partly by The Wombats’ desire to push themselves, was curiously also impacted by COVID.

“The album wouldn’t have sounded exactly the same if we’d just all been in the same room,” notes Haggis. “You can’t help but be influenced by where you are, who you were, what the room sounds like; it all kind of bleeds in to shape the album. I mean, obviously, you’ve got lots of plugins nowadays that emulate all different spaces, but I think the fact that Murph was doing guitars and vocals in a room altogether in a different country, everything was slightly different than it would have sounded. And I think that made the album richer, sonically.”

And this change in sound is evident. The first single, ‘Method to the Madness’, was released in May 2021. While the track starts out as a controlled, synth-based piano track, it escalates until the last minute, where vocalist Murph completely lets loose, saying “fuck” a grand total of sixteen times. As the title suggests, there was a method to the madness. “By the time we got towards the end of the song, it could have just carried on and like, faded out in all kinds of more lo-fi, ambient sounds,” explains Haggis. “But instinctively, we were just like, ‘We need to fucking explode now’, and obviously the whole end just goes off.”

I think if people like it as much as we do, then it’s just going to be a massive YES

Not only is the album a sonic departure from their past work, but each song on the album sounds completely different from the last. “We tried on this album to make, like, do U-turns a lot more within songs, and I think that makes the album kind of rich,” says Haggis. “Given how many weird new terms and transitions we’ve all had over the last couple of years, musically it kind of makes sense for the times as well.”

In such a tumultuous year, the album gave the band something to focus on, and served as a pleasant distraction from the world – a feeling that feeds into the album’s title: Fix Yourself, Not The World. But when asked about the possibility of future Wombats’ albums being recorded remotely, Haggis laughs. “I hope it was just a one off. It would definitely be preferable to be in the same room”. And who can blame him? After almost two years of remote working, Zoom meetings, and even online pub quizzes, face-to-face, or ‘real’ interaction is the only antidote to the sterility of the technological age.

But now, with the pandemic (hopefully) coming to an end, The Wombats are more than ready to get back on stage again. The band have even got their biggest headline show to date coming up – The O2 in London in April. With a distinct change in sound from their past work, it is often difficult to know whether the songs are going to translate well live. “It obviously depends on how people embrace the album. But I think if people like it as much as we do, then it’s just going to be a massive YES.” And The Wombats certainly know how to capture an audience. Pairing their well-known and loved earlier releases with the earworm choruses and slick riffs on Fix Yourself, The Wombats’ upcoming gigs are certainly going to be ones to remember.

“Just try and give that little demon a hug and say, ‘Come on mate, we’re gonna be here for a long while’.”

It’s not surprising that after the pandemic, some artists are writing albums filled with party anthems that will sound good live. But for The Wombats, making music that sounds uplifting and energetic comes naturally to them. “We don’t sit around beforehand and [decide] ‘Let’s make a party song,’ or ‘Let’s make it really fun,’” Haggis reflects. And this is what sets The Wombats apart from other bands in the scene: they are just as capable of making explosive, uplifting bangers – such as the highly energetic ‘Flip Me Upside Down’ – as they are of making introspective synth lo-fi tunes such as ‘This Car Drives All By Itself’.

But despite The Wombats’ upbeat-sounding songs, their lyrics have always taken on a slightly darker tone. On Fix Yourself, the biggest example of this is ‘Worry’, a song about anxiety, OCD, and the downturn of people’s mental health during the pandemic. But instead of glorifying or vilifying it, The Wombats put a different spin on it. “There’s no point just fighting against [poor mental health] so much and worrying about so much that you can just get worse and worse. You end up in this vicious circle and downward spiral,” says Haggis. With vocalist Murph having struggled with his own mental health in the past, it’s no surprise the band wanted to explore this in their music. And instead of glorifying or vilifying poor mental health – as many have been guilty of in the past – The Wombats advocate for a much more neutral representation of mental illness. Haggis’ advice? “Just try and give that little demon a hug and say, ‘Come on mate, we’re gonna be here for a long while’.” In a time where the pandemic has collectively impacted people’s mental health, this neutral representation of mental health as something that is ‘just there’ is exactly what we need.

In the past year, The Wombats have also encountered a completely different kind of fame – TikTok virality. Just over a year ago, over 400,000 videos were made using a remix of their song ‘Greek Tragedy’ – which has since amassed almost 175m Spotify streams. “It’s been surreal,” says Haggis. “And it’s kind of just a nice little fun presence from the gods of music throughout the pandemic. People who maybe wouldn’t have otherwise heard of that one have now discovered us through this remix that we never even properly released. And it’s become one of the best songs streaming for us for this year”. As Haggis himself notes, this virality has brought on a new generation of Wombats fans. They are perhaps five or ten years younger than those who first listened to their 2007 debut album A Guide to Loss, Love, & Desperation, but are just as invested in the indie-rock trio as their older counterparts. And with a newly released stellar album, The Wombats show no signs of slowing down.

The Wombats are often unfairly relegated to being another ‘generic indie-rock band’, but the fact is, they are so much more than that. Armed with their characteristic uplifting indie-rock anthems and an arsenal of excitingly refreshing tracks off Fix Yourself, The Wombats are ready to take the post-pandemic world by storm.