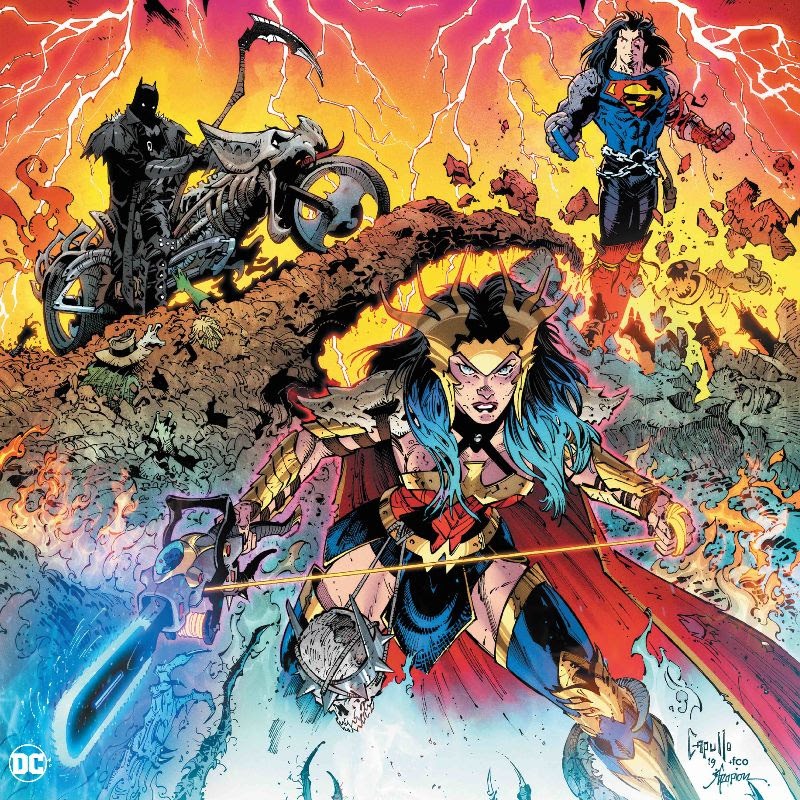 There is a striking irony to the soundtrack accompanying DC’s latest comic series. For a compilation album with ‘Death Metal’ in the title, there is no death metal to be heard. What is actually on offer, however, is far more exciting: a dizzyingly diverse soundtrack encompassing a whole spectrum of rock and metal subgenres, provided by a stellar line up of artists. Heck, noone could say that this is lacking ambition when bands as far apart as Mastodon and IDLES can be found on the same tracklisting.

That said, as ambitious as the diversity on show here is, it also represents a huge risk. Cohesiveness is important on any record, and its importance multiplies tenfold on a soundtrack where each individual track has to sustain a story and create an atmosphere. It becomes a taller order still when the sounds of fifteen different artists collide, yet somehow, against all odds, it kind of works.

Proceedings begin with Mastodon, who boldly fire out of the traps with ‘Forged By Neron’, a gritty, thunderous beast of a prog track that plays with light and shade with the kind of control that only the most skilled musicians can wield properly. Later on, Chelsea Wolfe’s ‘Diana’ and HEALTH, Tyler Bates and Chino Moreno’s ‘ANTI-LIFE’ share a brooding sense of drama amplified by shuddering synths that conjure images of industrial, dystopian landscapes. These two tracks are natural companions, perhaps slight non-sequiturs in the shadow of Mastodon, but a shared sense of mood and attack ties them together and prevents two very different sounds from feeling mismatched.

The rest of the album bounces from genre to genre at breakneck speed, some fitting the brief better than others. The thumping punk urgency of Rise Against’s ‘Broken Dreams Inc.’ could work wonderfully as the background music of a fight scene, or of a sequence of heroes running from disaster, for example. In contrast, Grey Daze’s similarly punky ‘Anything, Anything’ struggles to find its place (as wonderful as it is to hear the late Chester Bennington in all his glory).

Much of the middle part of the soundtrack attempts to carry forward the sound of Chelsea Wolfe and HEALTH’s respective songs – moody, guitar-driven anthems with a sprinkling of synths, and it’s remarkable that it still sounds so unified when so many different artists are contributing. Particular shoutouts have to go to GUNSHIP, Dave Lombardo and Tyler Bates’s ethereal ‘Berserker’, and another Bates collaboration with Greg Puciato and Gill Sharone, ‘Now You’ve Really Done It’, a grooving track that coolly flits between languid and livid. Soccer Mommy’s closing track ‘Kissing In The Rain’ is the biggest outlier on the record, but its achingly romantic sentiment and warm guitar pluckings clamp onto the listener’s heart and keep them hitting repeat.

In spite of its general success, DC’s Dark Nights: Death Metal Soundtrack does have a couple of weak moments. Denzel Curry and PlayThatBoiZay’s ‘Bad Luck’ is messy and dissonant in a way that sounds grating more than it feels intriguing, while IDLES’ sludgy ‘Sodium’ sounds like it is stuck in the mud, never really getting anywhere. These are small blemishes, however, on what is overall a polished, ambitious and relentless soundtrack that thrills without fail, again and again, all while invoking images of comic book adventure in powerful, immersive style.