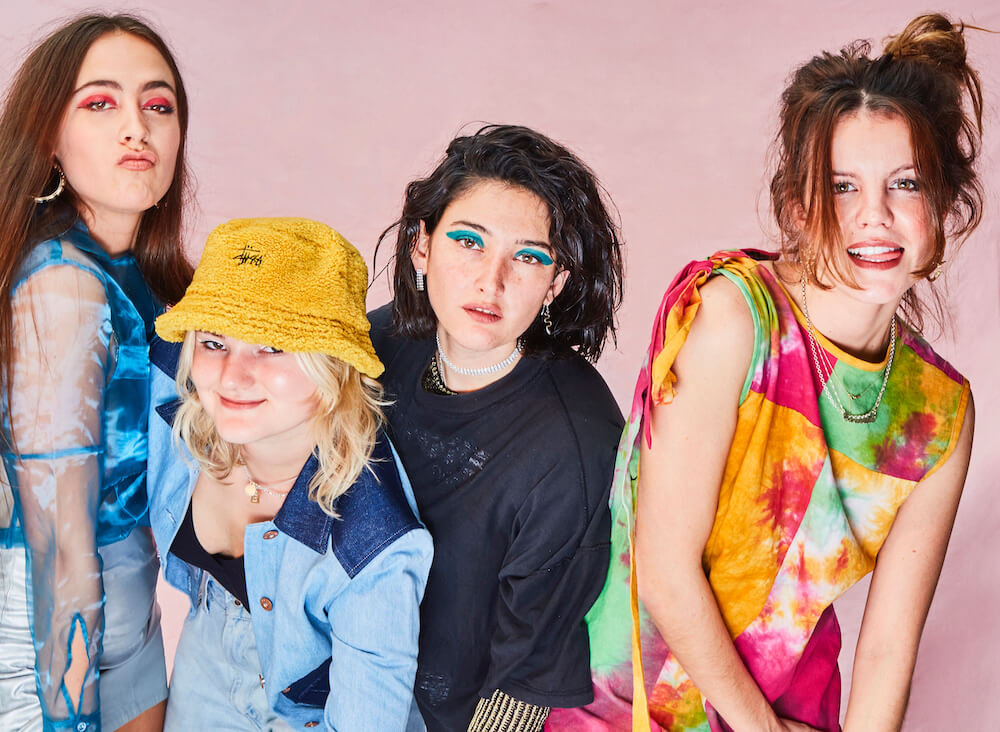 Hailing from Madrid, Spain, Hinds is an all-female indie rock band. Over the course of their nine-year career, they’ve released two albums, Leave Me Alone and I Don’t Run, a handful of singles, an EP, and now their newest album.  The Prettiest Curse was due to be released in April but was delayed until June 5th because of the coronavirus pandemic, which has seen several artists also delay or completely cancel release dates. The Prettiest Curse is not only louder but bolder than any of their previous work, showing a clear sense of the band’s evolving identity, and receiving much positive acclaim because of it.

Prior to the album’s release, I was lucky enough to get the chance to interview Hinds’ drummer Amber Grimbergen. Despite the distance, (it’s about 1,185 miles from Coventry to Madrid), I found out that we share some of the same ideas about pop music and women in the music industry, as well as having learnt more about the Spanish music scene. Although the pandemic can feel very isolating, it’s important to remember how music can connect us not just with people we know but with people from all over the world, too.

Question: Only yesterday, (at time of writing), you released a music video for your single Just Like Kids (Miau). You told NME that the music video is a response to all the unsolicited ‘advice’ you’ve received as an all-female band. Do you think it’s harder to make it as an all-female group in the music world?

Amber: It has definitely been different than if we would have been an all-boy band, especially in Spain. I think being an all-female band helped us catch more attention in the beginning. In 2014, it wasn’t that common to see girls in a band and even less common to see young girls in a band. But people are harder on you as a girl. You get questioned for everything. From the clothes you wear, how many times you smile, or how big your ears are: so imagine how free everyone feels to criticize the way you play your instrument being a girl!

And it’s true that as a full-male band, no one would ever say “hey check out this full-boy band!”. Full-girl bands – we have become a genre in itself and we get compared just because we’re girls even though we play completely different kinds of music.

Q: Are there any female singers or groups you admire for making a splash in the music scene? Or women you admire in for making an impact in any other creative areas?

A: I admire all my bandmates [as well as] Remi Wolf, M.I.A, Natalie Mering, Charli XCX, Fiona Campbell, Neelam Khan Vela, CJ Harvey, and so many more! We have been able to meet so many awesome women this past couple of years. Every one of them has taught us so much.

Q: The name of your group Hinds means ‘female deers’,  but you were originally called ‘Deers’. Is there some significance or symbolism behind ‘deers’?

A: Not really! We like one-worded short band names and it has been just a coincidence that both of the names have a similar meaning. It obviously made it easier to pick one.

Q: Your music is often referred to as ‘garage-pop’ and ‘lo-fi music’, which are both genres that have been on the rise in recent years. Why do you think this style of music, including your own, is so popular nowadays?

A: Because people are starting to do things themselves and I think the results of those resources have become a genre itself.

Q: Speaking to NME, you said you’ve previously steered away from pop music. Do you think there’s a stigma attached to making pop music as it is often seen as prepackaged and unchallenging for its audience?

A: It is all about the ‘image’ pop music has had during the past decades. Everything seems to be perfect in pop music: everything sounds perfect and everything is performed by perfect individuals doing it perfectly. There’s no sweat at a pop show! We didn’t find room for guitars, drums and bass in pop music [or] room for our sweaty armpits, haha! But I think we managed to find a good fit for them and made a great meeting point. Where rock meets pop!

A: Everything has evolved in so many directions, we are fully grown-ups now. In the sound, you can still hear our roots. You can tell where we come from but at the same time you can tell the progress and that is beautiful. Lyric-wise, we have always been very careful, using metaphors for example, but now we are more straight forward and just say things as we feel them.

Q: Leading on from that, what can we expect from your next album, The Prettiest Curse?

A: I do not think people are ready! Seriously, we are so proud of this album. All of us have had a moment while listening to it, where we were like: “SHIT! THIS IS ACTUALLY US!”

Q: You credited The Jesus and Mary Chain, Molotov, and Los Punsetes as inspiration for this album. Who are your greatest musical inspirations? Do you find that your inspiration is constantly evolving or are there some musicians that are ‘staples’ for you?

A: There is always someone that stays in there forever, the ones that have taught you the first steps. But yes! Inspiration changes as people change. It never stops.

Q: You said in a statement regarding the global pandemic that “we all need music now more than ever”. Do you think music is important for people’s wellbeing and happiness?

A: Some people don’t like music or music isn’t that big of a part in their lives, and that’s ok of course, but I think music is important, for me at least. It has been a huge part of my life, since my first memories. It has also been important in my family and I think it has been for a lot of people. A lot of times when you feel lonely or sad, music is there. Also, when you feel happy and loved, music will be there for you. Music has all colours and shapes and music is for everybody.

Q: Which artists and albums are you listening to while in lockdown?

A: I am having such a great time doing research of bands, old and new, and I am discovering so many cool things to listen to! I discovered Browning Bryant and simply loved him. These are my most listened to albums in this lockdown: Pet Sounds by the Beach Boys, It’s All In Your Head by the Undercover Dream Lovers and a lot of CAN but mostly a lot of good playlists I’m finding.

Q: This year, you abruptly got the chance to open for The Strokes. You guys are really big fans of them, so what was it like opening for a group that you love so much?

A: It has been one of the best experiences! And it all happened from one day to another. We got to hang out with them and I don’t think this is going to be the last time we see each other.

Q: Although you guys are a Spanish band, you usually write your songs in English. The Prettiest Curse promises to include more Spanish, both in the lyrics and the sound of the music. Why did you decide it was time to switch things up?

A: We have always thought about putting some Spanish in the lyrics but never felt it was the right moment. These last few years Latin music has become more popular everywhere and it is not so weird anymore to listen to people singing in Spanish, so we felt it was good timing.

Q: Why did you decide not to write primarily in Spanish at first? Do you think it’s more difficult to break into the global music scene if you write lyrics in your native tongue?

A: We didn’t really think about it that much. All the music we used to listen to were mostly bands from the US, so whenever we tried to put the lyrics to a song everything that came out was in English.

Q: Your tour has been postponed due to the unprecedented virus. But, keeping things on the positive side, which locations are you most excited to play? Are there any places from that tour you’re excited to play again?

A: Our last tour was in 2018, a long time ago. I personally was super excited to go back to the US and the summer festivals we were supposed to play this summer all around the world.

Q: Finally, why did you decide to name the album The Prettiest Curse?

A: It’s something we used to say about touring life. We love our job and we are so grateful we can play music for a living and be able to share it with the world. But it has its tough parts too – and its craziness!

The Prettiest Curse was released on June 5th via Mom + Pop Records.