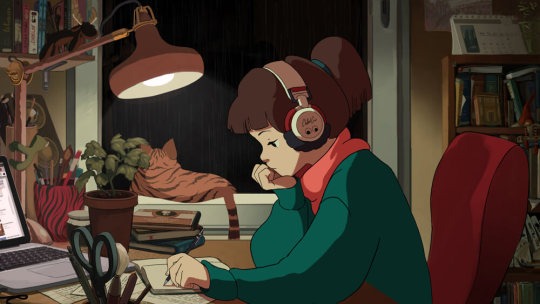 Many people recognise the term lo-fi nowadays. It often pops up in the top corner of our Youtube recommendations- the increasingly specific titles from ‘2 A.M Study Sessions’ to ‘lo-fi beats to quarantine and stay indoors to’ tend to draw the eye. But what exactly is lo-fi music? And why are there so many 24 hour streams of it with pleasing anime visuals and edgy lowercase titles to accompany them?

‘Lo-fi’ is short for ‘low fidelity’, which is when distortions or errors are picked up in music recordings. Usually, these are undesirable. However, lo fi embraces these mistakes (think Bob Ross’s ‘happy little accidents’ but in music form) and makes it an important part of the genre’s aesthetic, often adding them in on purpose to add to the song’s homespun feel.

The genre fits snugly with the kind of music you often find from independent artists on Bandcamp, such as garage pop, bedroom pop, and shoegaze. But lo-fi also sounds as if it could fit into the backdrop of an animated movie- imagine if the soundtrack of a Studio Ghibli movie was recorded by an artist like Clairo and you’ve pretty much got it.

Often, lo-fi music is made at home, even in the artist’s bedroom, which makes it one of the only genres that is regularly listened to in the same environment in which it was created and produced

Although lo-fi has grown in popularity recently, fuelled by Youtube channels who provide constant feeds of the music, it can be dated back as far as the 1950s. Amateur musicians working on small budgets often produced music with a raw sound, including unintended distortion effects. The term ‘lo-fi’ would later go onto to refer to indie and alternative groups who recorded music at home- the use of abstract lyrics and structures, as well as the low-quality production, meant that they produced a different sound to mainstream songs. When I think of lo-fi, it reminds me of this sort of DIY production.

In modern times, lo-fi is usually slow and dreamlike- in fact, a lot of inspiration for the modern genre comes the ethereal ‘dreampop’ of the 1980s. Unlike prepackaged pop music, there is something oddly comforting about the imperfections and simplicity of this style of music. With its peaceful atmosphere, it can easily be put on in the background without becoming too distracting, which is why many choose to listen to it while they study. Often, lo-fi music is made at home, even in the artist’s bedroom, which makes it one of the only genres that is regularly listened to in the same environment in which it was created and produced. This is another reason that it’s so easy to sink into.

There are some really popular artists who fall under the lo-fi umbrella. I have two of In Love With A Ghost‘s albums on vinyl, and City Girl has streamed their entire album for free on their YouTube channel: a large part of lo-fi’s success is its willingness to adapt to the times and take its genre almost exclusively to streaming platforms. Most lo-fi artists aren’t signed to labels, so you won’t find their albums available for physical purchases in-store. In fact, a large part of listening to lo-fi involves discovering lesser-known artists.

Originally, I found lo-fi through Bandcamp, which is a pay-as-you-like streaming service populated by independent artists. When I was studying for my A-Levels, I frequented High Sunn’s Bliss and In Love With A Ghost’s Healing whenever I sat down to revise. The calming atmosphere makes it perfect for studying or sleeping, as its dreamy sound makes it easier to tune out from the world around you. Eventually, it became part of my routine to choose a compilation, playlist, or album to put on in the background to draw my focus to whatever I’m working on. (If only Curiositea endorsed it, I’d get so much more work done in there.)

Lo-fi also provides a stepping stone to so many different music genres. Some I’ve detailed already, such as bedroom and garage pop, but lo-fi is an umbrella term for so many different artists that there’s always more to discover. Each is more interesting than the last. Recently, I’ve been turned onto Japanese indie rock, (POLKADOT STINGRAY have some excellent songs if you’re needing recommendations), and was pleasantly surprised to find out it’s a genre largely fronted by women. If I hadn’t listened to lo-fi in the first place, I likely never would have known it existed.

The common misconception surrounding lo-fi music today is that it, for all intents and purposes, is lounge music. It is seen as music with an analogue sounding warmth, minimally produced and designed to be played in the background, as an unobtrusive companion to studying or sleeping.

Yet this genre is more than just mood music  – it is an aesthetic choice. Its sound originated in a DIY culture that used the misplayed notes, sonic interference, and imperfections while recording to give expression to a rawer, unrefined attitude to making music.

If we define lo-fi music by its literal meaning – that of a low fidelity recording – it becomes clear that the sound popularised by playlists such as “lo-fi hip hop beats to study/relax/chill to” is not lo-fi in the technical sense. These playlists feature recordings that are laid-back, fuzzy, compressed in a way that gives them a dreamy quality.

They bear no resemblance to a genuinely lo-fi album such as Times New Viking’s Rip It Off, which was recorded to cassette and is filled with thin, harsh, and distorted noise. Listen to a track such as ‘Relevant: Now’ and amidst the hiss of tape hear the blown-out guitars and wailing lead vocals form a wall of noise, with the constant instrumental feedback just adding to the messiness.

This type of recording is designed to afford the listener a type of intimacy, a blanket of sound where lyrics often take a backseat to fuzzy instrumentation. The focus on using certain recording practices to produce a lower quality sound is not a gimmick, rather it is a push for an aural commitment. By drawing a listener into the murk of a pared-back recording, an artist is attempting to create a shared space, one centred on bringing listener and artist closer together through the music.

Lo-fi does not necessarily have to mean low-key either. Take The Microphones’s The Glow, pt.2, which adopts an extreme approach to lo-fi techniques. The title track opens with aggressively distorted guitars and drums, which suddenly slides into a section of acoustic guitars before collapsing into layers of multi-tracked organs. Over this instrumental frontman Phil Elverum sings through analogue distortion, “I faced death/I went in with my arms swinging/But I heard my own breath/I had to face that I’m still living”. Sonically and lyrically the album is unsettling, but in such a way that jolts you into confronting the messiness of life.

Elverum uses the possibilities afforded by lo-fi recording techniques to create an album that vividly evokes a sense of place. His compositions form sonic recreations of the mountains, lakes, and forests of the Pacific Northwest through his distortion of his instruments. It is a way of making music through subtle textures, an opaqueness that is at odds with traditional pop structures.

While there is enjoyment to be had unwinding to the sounds of a minimally produced hip hop beat, that is just one use for these recording techniques

Rejecting convention is a hallmark of the genre-bending work of Ariel Pink, an artist whose home recordings inspired the chillwave genre of the late 2000’s. Pink’s 2014 record Pom Pom thrives on an oddball eccentricity, shifting from catchy to macabre in the blink of an eye. What other album could transition so seamlessly from ‘White Freckles’, a shimmering piece of lo-fi synth pop, into the gothic rock of ‘Four shadows’ a track which playfully toys with Black Sabbath-esque metal riffs.

It is a song which seems like it could have been cut from the Rocky Horror Picture Show soundtrack, filled with theatrical lines such as “only darkness in the night/ things that go bump in the night”. Pink’s tongue is lodged firmly in his cheek throughout the album, which combines lo-fi recording with an approach that evokes a kind of nostalgia, which sounds like a memory from a forgotten time and place.

Lo-fi music should not just be viewed as music that provides background ambience. While there is enjoyment to be had unwinding to the sounds of a minimally produced hip hop beat, that is just one use for these recording techniques. The genre has the capability to produce art that is truly mould-breaking, music that ruptures the patterns of popular music in an attempt to express rawer feelings and emotions.