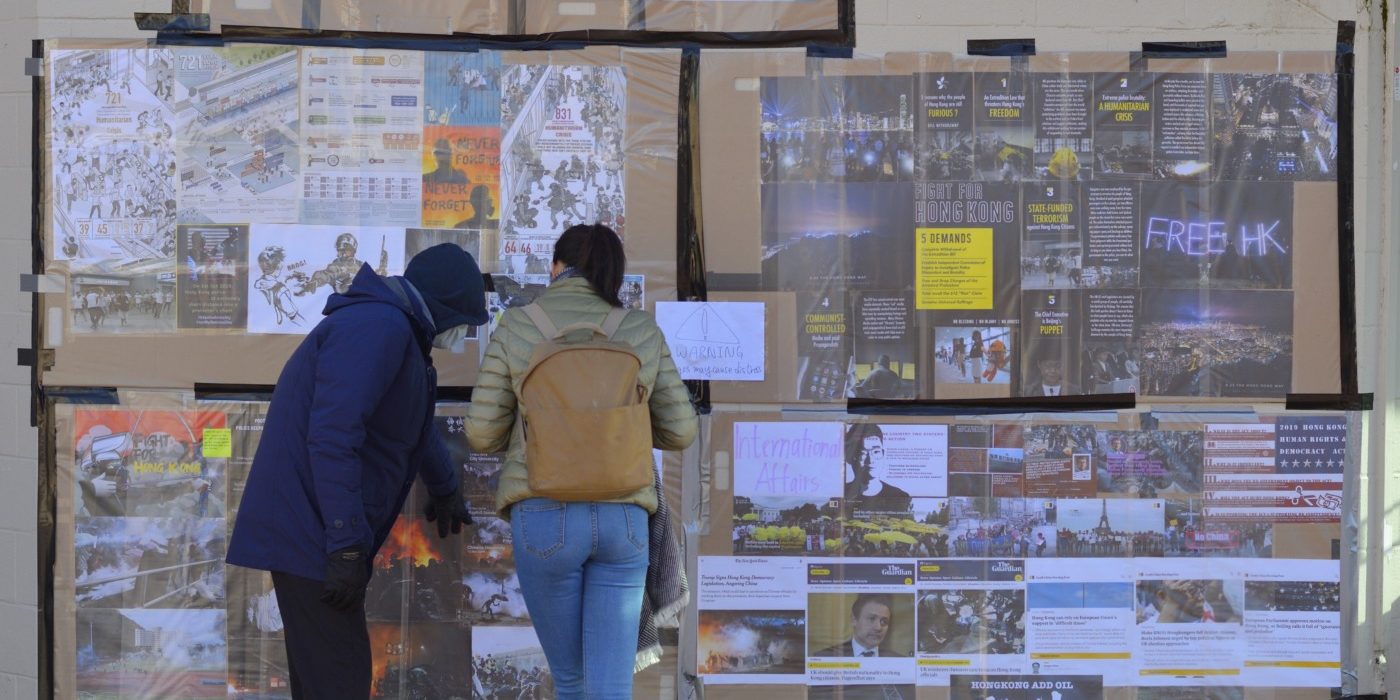 University of Warwick students from Hong Kong have put up another Lennon Wall on the Piazza on central campus, having done the same last term. The wall was put up at 9am today by masked students in black as campus security patrolled the area. It displays slogans such as “free HK” and a “comprehensive timeline of events” relating to protests in the city.

Speaking to The Boar, Warwick4HK – the group of Hong Kong students behind both walls – said this installation is “more updated” and has “two themes”: the “siege ” of Polytechnic University in November 2019, as well as “international affairs” including the US bill on Hong Kong’s democracy and the detainment of former UK consulate worker Simon Cheng.

Through maintaining the wall from 9am to 5pm every day this week, Warwick4HK hopes to “continue to raise international awareness” of the situation in Hong Kong and “gain more support”. So far, student reactions to the second Lennon Wall has been “positive […] as quite a lot of students seemed interested and they stopped by to have a closer look”. They also discussed the wall with the Hong Kong students, asked questions and took photos, The Boar was told.

The application process for this term’s installation has been “longer than that of last term’s” as Warwick4HK “had to work together with campus security to comply with the conditions for the use of the Piazza”.

They met with the security team three times to discuss the date and times for the wall, as well as the materials that were to be put up.

“We were asked to provide warnings of distressing imagery and clear explanations of the use of certain imagery to avoid confusion.

“But it was all good as we had very effective communication this time and we were more aware of the procedures we should take when facing risks,” the students said. “Overall, the application process was smooth as there was flexibility and the willingness to work together from both parties. We appreciate the efforts from the security.”

Being a group of individuals with no authority backing, our voices are soft […] But we make sure that we spoke and that we will never stop speaking out

The University of Warwick said that the students were granted the “normal application process”. They continued: “The issues surrounding this are clearly ones that continue to produce passionate debate in our campus community.

“In any such matter the University will always wish to ensure that anyone engaging in peaceful protest and counter protests  are able to do so while keeping everyone involved safe, and our security team will obviously play a key role is supporting those outcomes.” The Boar asked about the Hong Kong students for their opinion on the All Student Vote (ASV), which saw a motion on the Students’ Union (SU) supporting the city’s movement defeated by 1,070 votes – the largest majority since the start of 2018/19.

They thanked those who voted in a statement, which wrote: “Being a group of individuals with no authority backing, our voices are soft. We have no representation. And we are outnumbered.

“But we make sure that we spoke and that we will never stop speaking out.”

Last term, the Lennon Wall contained the mural of a pig which was dubbed “racist” by mainland Chinese students. Campus security subsequently removed that part of the wall, a decision that was protested by the Hong Kong students as well as the SU’s Ethnic Minorities Officer Taj Ali, and supported by the International Students’ Officer (ISO) for non-EU students, Zishi Zhang.