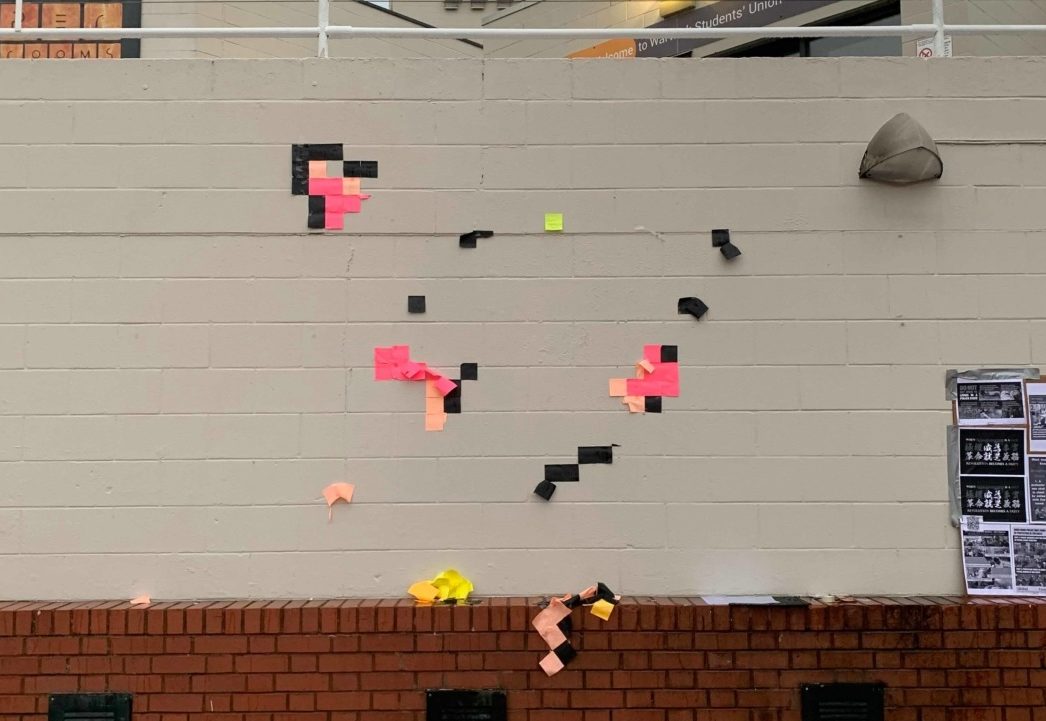 The Hong Kong students at the University of Warwick who erected the Lennon Wall at the Piazza on Wednesday 6 November have released an open letter.

The letter defends the mosaic pig that was put up on the wall, which was allegedly racist according to Chinese students represented by the Students’ Union (SU)’s non-EU International Students’ Officer (ISO) Zishi Zhang, who released an open letter yesterday.

The “group of Hong Kong students who aims to raise international awareness of the injustices and suppression in the city”, under alias Warwick Stands with Hong Kong, also provided further background to the city’s protests.

The first section of the letter read: “In the span of five months, millions of people took to the streets in protest of the recently-withdrawn Extradition Bill. Yet, Hong Kong’s citizens right to peaceful assembly and freedom of expression have since been and continued to be threatened, while the police abuse of power remains unmonitored.

“While the enactment of the mask ban continues, police officers are, in contrast, no longer required to display their ID or any physical or official identification, leaving no remedy for the victims of police misconduct. This raises concerns towards the anonymous nature of the movement – while we have to remain faceless for our own safety, the police can also manipulate anonymity to commit abuses of power.

“It is worth noting that the movement in Hong Kong has often been misconceived as attempts at gaining independence from the People’s Republic of China (PRC) and promoting separationism. This characterisation is simply untrue – the people of Hong Kong are fighting for five demands.”

The five demands listed include the withdrawal of “the Extradition Bill (which has now been fulfilled)”, the establishment of “an Independent Commission of Inquiry into police misconduct and brutality”, and the implementation of “genuine universal suffrage and democracy”.

“Dropping charges against the arrested protestors” and “(r)etracting the classification of protests as ‘riots’” consist the remaining demands.

“Ultimately, we are fighting to uphold the promise of ‘One Country, Two Systems’ as outlined in the Sino-British Joint Declaration,” the letter continued, “recently endorsed by former Foreign Secretary Jeremy Hunt and current Foreign Secretary Dominic Raab.

“Hong Kong citizens are resisting because the high degree of autonomy promised under Chinese rule has been continuously eroded.”

Ultimately, we are fighting to uphold the promise of ‘One Country, Two Systems’ as outlined in the Sino-British Joint Declaration

For the remaining of the introductory section, the letter read: “The ongoing movement in Hong Kong is not merely a political struggle but an example of a humanitarian crisis. Protestors are not merely fighting against their very own oppression, but defending the causes of human rights and freedom from oppression for the rest of the world.”

The wall was thus set up “to raise international awareness”. The letter explained that an application to erect the wall sent to the University on 10 October was not responded to until 3 November.

The original request to maintain the wall for a month was “rejected”, and eight hours were allocated to the students “due to the popularity of the Piazza” while “alternative proposals” were turned down.

“The University showed no intention to negotiate,” the letter continued.

“While we understand the potential criticism towards permitting the prolonged campaign of one party, we believe that any academic institution which encourages critical thinking and intellectualism should encourage people to speak up and voice their opinions – one of the major functions of the Lennon Wall.”

The letter went on the clarify the mosaic pig made of post-it notes, adorned with a hardhat, which took up one part of the Lennon Wall.

The students put it up “for the purpose of attracting attention and constructing a symbol of the Hong Kong protestors, and pay homage to them.

“This pig is the mascot for LIHKG, a Reddit-esque forum used by many Hong Kong people. Variations of the pig is also seen on many Lennon Walls in Hong Kong.”

It was taken down after mainland Chinese students complained that the pig was racist.

The letter elaborated: “They believe that the pig means ‘Zhi-Na pig’, which was how the Japanese army used to name and humiliate Chinese people during the Second World War.

“It is simply unreasonable for us to put up a symbol that is offensive to our very own race, given that people living in Hong Kong are Chinese. Hong Kong was also a part of China that was then being invaded.

“Nonetheless, the head of the campus security ordered the removal without giving us a chance to appeal nor explain. Neither did they try to investigate the legitimacy of such complaints before making the decision.

“Such a decision following the one-sided complaint has inspired within us concern regarding how the significance of our group is inferior to those who complained. As such, we would like to seek a clear clarification from the university (sic) on the rationale behind their decision.”

Addressing allegations made in the ISO’s open letter regarding Warwick Stands with Hong Kong’s “racist, discriminatory and misleading” material on social media and the Lennon Wall, the students wrote: “We deny all these groundless allegations and urge for concrete evidence and examples to be provided before any allegation is laid.

“We are deeply disappointed and strongly oppose the attempt of the opposite party to smear us with such slanderous language.”

The letter concluded that the Lennon Wall incident “is in fact a great illustration of how the freedom of expression on campus can be jeopardised by the mere existence of a dissenting party”.

It added that the Equality and Human Rights Commission (EHRC) “has emphasised that ‘protecting freedom of expression is a legal requirement for most higher education providers’”.

The students went on to quote Martin Niemöller’s post-war confession, “First they came…”.

Following the quote, they said: “We therefore urge the University of Warwick and the Students’ Union to stand for human rights and democracy.”

In a closing statement, the “group of staunched Warwick students from Hong Kong” said they do not “represent the welfare of the Hong Kong student community, but voices out the yearn for liberty and human rights amongst Hongkongers here.

“We may not be democratically elected, but we still possess the freedom of speech endowed and protected by the laws here in the UK. We do not wish the corrosion of human rights to happen here at Warwick, as it is in Hong Kong.”

Warwick SU’s ISO Zishi Zhang has been contacted for comment.