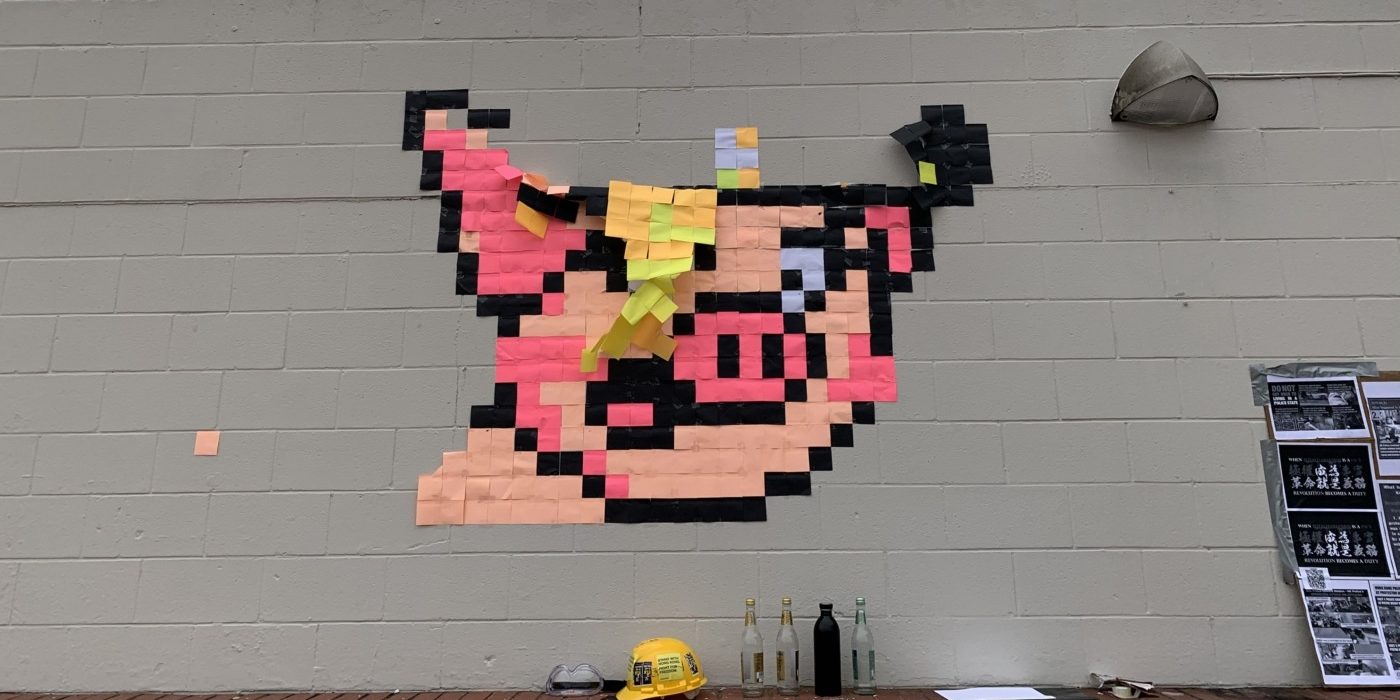 Zishi Zhang, the International Students’ Officer (Non-EU) at the University of Warwick’s Students’ Union (SU), has challenged the University’s approval of a request to put up a Lennon Wall on campus in an open letter. Safety goggles and a hardhat placed under the “Li pig” mosaic. (Image: Evianne Suen / The Boar)

A group of Warwick students from Hong Kong erected the wall at the Piazza yesterday for eight hours. Part of the wall included a “Li pig” made with post-it notes. The mosaic pig was taken down by campus security after mainland Chinese students complained it was racist.

The International Students’ Officer wrote the letter on behalf of Warwick students who were “extremely disappointed and upset” by the “so-called” Lennon Wall.

“Four students who claimed that they are from Hong Kong staged a protest” yesterday, the letter read, “filling (the wall) up with racist, discriminatory and misleading information full of blatantly factual mistakes, words of hatred and provocative sensationalism that aims to build divisions between the Mainland China and Hong Kong communities.”

They acknowledged the University’s approval of a request “to allow this staged protest to go ahead” sent on 3 November by a student from Hong Kong.

“The protest has attracted a large group of Chinese students who are extremely angered, and might I add, righteously so, by the insulting pig image and other degrading racial languages that imply racist connotations,” Mr Zhang wrote.

The protest has attracted a large group of Chinese students who are extremely angered, and might I add, righteously so, by the insulting pig image and other degrading racial languages that imply racist connotations

“The invading Japanese army during the WWII invented the ‘Zhi Na pig’ phrase to dehumanise Chinese people to that statue of less than human. this (sic) is the ultimate insult in Chinese culture – you cannot find more (sic) racist remark against Chinese people than this.

“This racial phrase is equivalent to those which were used by the colonisers against indigenous people. I am extremely shocked and saddened such incident is still taking place in the 21st century.”

The officer expressed that he has “full confidence” Professor Croft “has not acted against such racist behaviour” as he was not made aware of the Lennon Wall.

He added that the University “would not wish to be seen as continuously falling (sic) (its) students” and referred to the group chat scandal, as well as Warwick’s failure to respond to the Equality and Human Rights Commission (EHRC)’s survey on racial harassment in higher education. A “Goddess of Freedom” poster on yesterday’s Lennon Wall with slogans written in Chinese. (Image: Evianne Suen / The Boar)

Mr Zhang said that he arrived on scene as soon as he was notified of the wall, to gather “complaints, comments and criticisms” from affected students and pass them to the University and SU.

He explained that he did so “to avoid the likelihood that it might escalate any further with such a large group present,” and that people “were convinced to take the rational decision to leave in a calm and orderly manner”. He thanked members of campus security for their assistance.

On behalf of the three societies and Chinese students who contacted him and “agreed without hesitation” to sign the letter, Mr Zhang, “as the democratically elected International Students’ Officer (Non-EU)”, put forward seven “questions and demands”.

He questioned how the request was “approved without consulting the democratic student body” – the SU – and passed the Impact Assessment Committee or other relevant bodies.

The officer continued: “Has the university not thought about the potential reaction such aggressive and provocative behaviour might have caused, or even worse, might deliberately wish to cause?”

“To what extant (sic) has the university assessed what has been put out there compared to what they requested to display?” the next question read.

Has the university not thought about the potential reaction such aggressive and provocative behaviour might have caused, or even worse, might deliberately wish to cause?

“As some, if not all materials contain foreign languages, have they and the university done the best to ensure that the part in Chinese and the part in English correspondent to each other and therefore not disingenuously misleading?”

The fourth question continued: “By allowing such request to go ahead, to what extent is the university implying they endorse or support the stance taken by the four Hong Kong students today?” One part of the Lennon Wall. (Image: Evianne Suen / The Boar)

Mr Zhang proceeded to cite a screenshot of an Instagram account made by Hong Kong students, under the handle @Warwick4HK, which previously used the University’s official logo as part of their profile picture.

According to the international students’ officer, the account has promoted “separatist messages, insulting racist language and inflammatory provocative posts”.

He asked if the University “(endorses) such behaviour by blatantly allowing the account to use the official logo,” and demanded for them to “formally review the entire request and the process which decision was made to grant the permission for it”.

Mr Zhang concluded that “relevant disciplinary measures must be applied” to the students involved if the University decides, following the formal review, that the “‘protest’ is deemed as extremely discriminatory and inappropriate.” A close-up of the Lennon Wall where “Pepe the Frog” post-its can be seen. (Image: Evianne Suen / The Boar)

He continued: “As the International Students’ Officer, I, of course welcome peaceful, mutually respectful and rational debates which would allow us to learn, exchange, debut different opinions with substantiated evidence, reasoned arguments and clear logic.

“I have been actively engaging with different societies and groups on campus, including Russian Speaking Society, African Summit Society and other cultural societies.

“I have written, proposed and passed a motion to the All Student Vote which encourages our university to campaign to petition the government for the Post Study Working Visa to be introduced now rather than later to avoid the international students being discriminated against when seeking employment.

“I believe my record of supporting student activities and representing student community in general speaks for itself.”

Mr Zhang reiterated that the signatories and himself “will not tolerate any deliberate attempt to insult (the Chinese) community, to delegitimise the existence of (China) and to spread hateful misinformation across the campus,” and called the incident “an absolute disgrace”.

The co-signed “seriously demand an explanation and formal apology from the university alongside with the guarantee that future requests such as this will go through a thorough process of risk assessment and (sic) reviewed by the democratically elected student representatives so such unfortunate event will not take place yet again,” the letter added.

“The point that not all Hong Kong students support this kind of protest cannot be emphasised enough,” he wrote, adding that the incident was “an unfair representation of their image and community on the campus as well”.

One student, “a Hongkong (sic) citizen who DO (sic) care (sic) the future of Hong Kong”, was cited saying: “The meaning behind the slogan ‘stand with Hong Kong’ is not what it seems like supporting the city and make this place prosperous again. Behind it, is a shout-out and support for all the thuggish things that the protesters has done.

“As a Hong Kong citizen, my life has been hugely affected by those non-peaceful protests, from damaging the MTR (Mass Transit Railway) to organising illegal and violent assemblies at the airports; (sic) From throwing firebombs on to the streets to beating people with different options (sic).

“They are not standing up for the REAL (sic) democracy, they are not making Hong Kong prosperous again.”

Dawei Zhou, a first-year Management student who was cited and “consented and insisted to use his real name”, said: “I am deeply disappointed that our university allowed such politically biased demonstration without prior notification to neither SU, student bodies or the general student community.

“This could be misunderstood to send a wrong message that the university is supporting a separatist group and interfering the internal politics of a sovereign nation.” An anonymous second-year student from mainland China stated: “As an international student, I’m sure that I understand individuals have freedom to express their thought, but the way of expression should be peaceful and legal.

“Social media companies choose to report partial facts which lead to asymmetric (sic) of information from both sides. For my personal experience, I was in Hong Kong during this summer. Witnessing what happened there, the whole economic environment and social stability ware ruined by illegal protestors.”

“The meaning of democracy does not mean violent action should be permitted,” she concluded.

When contacted by The Boar, the University they will “reply directly to the letter’s (sic) writers” and referred to the statement issued yesterday.

The Students’ Union told The Boar that they are “aware of a recent protest on campus which contained material considered offensive by members of our international community.”

“Our charitable objectives outline the Students’ Union’s core purpose and we do not take stances on geopolitical issues,” they said. “We recognise the right of members to hold their own individual views on the issue in question, and also support students’ rights to peaceful protest and free speech within the law.

“If anyone has been affected by these events and requires further support, please contact the SU Advice Centre.”