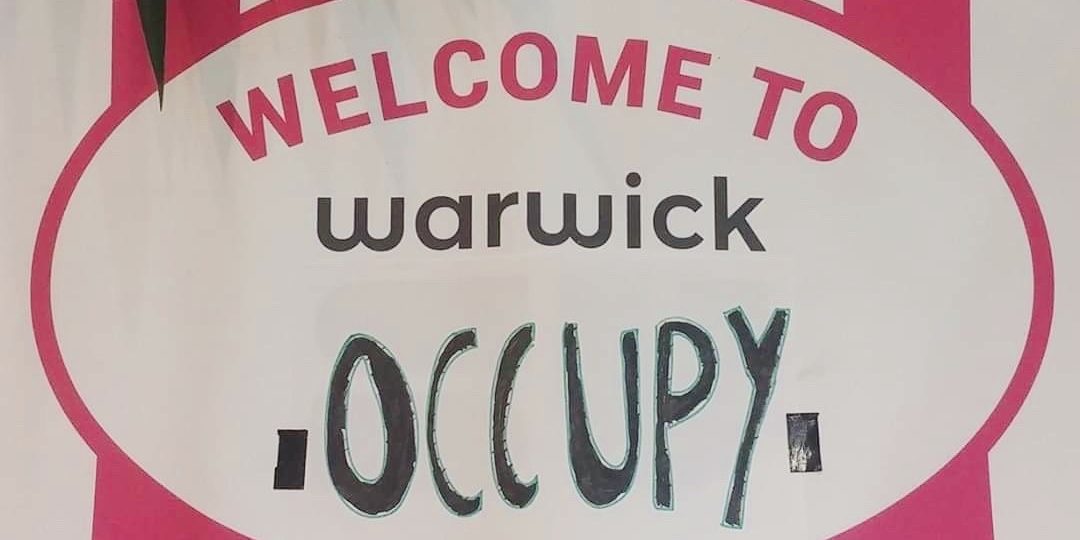 The group is indefinitely occupying the sabbatical officers’ room in the Students’ Union (SU) at the University of Warwick. #WarwickOccupy consists of students from Warwick Friends of Palestine (FoP), Anti-Racism (WARSoc), Anti-Sexism (WASS), Pride, Labour, Arabic Society and Warwick For Free Education (WFFE), all of which signed the statement published on Facebook.

Yesterday afternoon, Warwick Jewish Israeli Society (JISoc) hosted former IDF Colonel Eyal Dror to speak on campus. The SU’s Ethnic Minorities Officer Taj Ali led a protest outside the room where the talk was held, which was eventually moved to another venue.

The statement explained the protest was held against the IDF’s “routine brutalisation” of Palestinians backed by United Nations. In a Facebook post, Warwick JISoc said the talk was on “how nearly 700 humanitarian operations on the Israeli-Syrian border saved thousands of civilian lives”.

Highlighting the “importance of well-being for all ethnic and religious minority students and staff”, Warwick Occupy said: “We must reiterate that we strongly oppose anti-Semitism in all its forms, and the nature of this protest is inherently anti-racist. We do not conflate criticism of the Israeli state with criticism of Jewish or Israeli people.”

Furthermore, the organisation stands “against the presence of organisations on campus that directly endanger the wellbeing of marginalised students”, and the protest intends to “provide a space for those under military occupation to speak openly about the issues which affect their communities”.

The statement adds that the talk is “especially damaging” amid Islamophobia Awareness Month, and wrote: “Instead of drawing attention to this issue, the University are (sic) directly jeopardising the welfare of Muslim, Arab and Palestinian students.

“The external speaker review process has clearly failed, and the health and safety of vulnerable students has been ignored, despite complaints having been lodged upon the event being announced.”

The Boar was also told that two Black-British speaker events – one of which was to be given by Dawn Butler MP – submitted by WARSoc were also rejected. The source said that this highlighted the “double standards” different societies are subjected to.

We must reiterate that we strongly oppose anti-Semitism in all its forms, and the nature of this protest is inherently anti-racist

Warwick Occupy described the statement by the SU – released yesterday shortly before the talk by – as “lazy and inadequate”, “failing” to “address the ‘unease’ surrounding the talk” or “respect the mental health, wellbeing and safety of Palestinian and Muslim students”.

They added that they will be submitting a list of demands, drawn up by “a collective of Warwick Liberation Societies”, concerning “ethnic minority students and allies who have been ignored in their countless attempts to go through the supposedly ‘apolitical’ official channels.”

The statement continued: “In reality, the ‘apolitical’ nature of which (sic) currently serves as an excuse to avoid accountability and divert responsibility.”

“Our right to protest was essentially infringed upon, as it was made conditional on us giving up access to medication, food, water and use of the toilet,” Warwick Occupy’s statement continued.

It further outlines that the group felt their welfare had been “used as a bargaining chip by the SU” and that SU staff members “continually” attempted to “provoke and mislead” them. This has yet to be responded to by the SU.

Warwick Occupy said that the events of yesterday are a “catalyst” and not the “sole cause” of the occupation, which was motivated by the University and SU’s “consistent failure” in “their duty of care towards marginalised students and staff on a structural and institutional level”.

We were and still remain a peaceful protest, pushing for wider structural and institutional change in both our Students’ Union, and the University as a whole to ensure that all vulnerable students and staff are never failed again

They added: “This routine neglect of vulnerable students is also clearly evident in the university’s handling of the ‘group chat scandal’ during the last two years, as women, Black, Brown and Jewish students were put at risk in an attempt to save the reputation of the university.”

They recalled the letter sent by 10 UNISON members to the SU claiming of “institutional racism flourishing at its very heart”, the response to which has shown a lack of transparency and action taken to address it, Warwick Occupy commented to The Boar. They added that their actions are not taken against the sabbatical officers.

“Misinformation around both the nature and actions” of the protest has also been allegedly disseminated by The Tab and StandWithUs. Sources told The Boar that social media footage dispels their claims.

“We were and still remain a peaceful protest, pushing for wider structural and institutional change in both our Students’ Union, and the University as a whole to ensure that all vulnerable students and staff are never failed again,” the statement concluded.

Responding to enquiries by The Boar, the University said: “A student led event took place on campus that drew protests from other students who did not wish a particular speaker to speak at that event.

“The University was able to ensure that the original event, and the protest against it, were both able to take place.

“In doing so the University fulfilled both its clear and explicit legal obligation to ensure such free speech on our campus, and also our duty as an educational institution to provide and  encourage opportunities to examine, debate and challenge views on a range of issues, despite the challenging circumstances that can arise from the fact that many topics will be characterised by passionately held, and often diametrically opposed, viewpoints.”

SU President Ben Newsham has been contacted for comment.