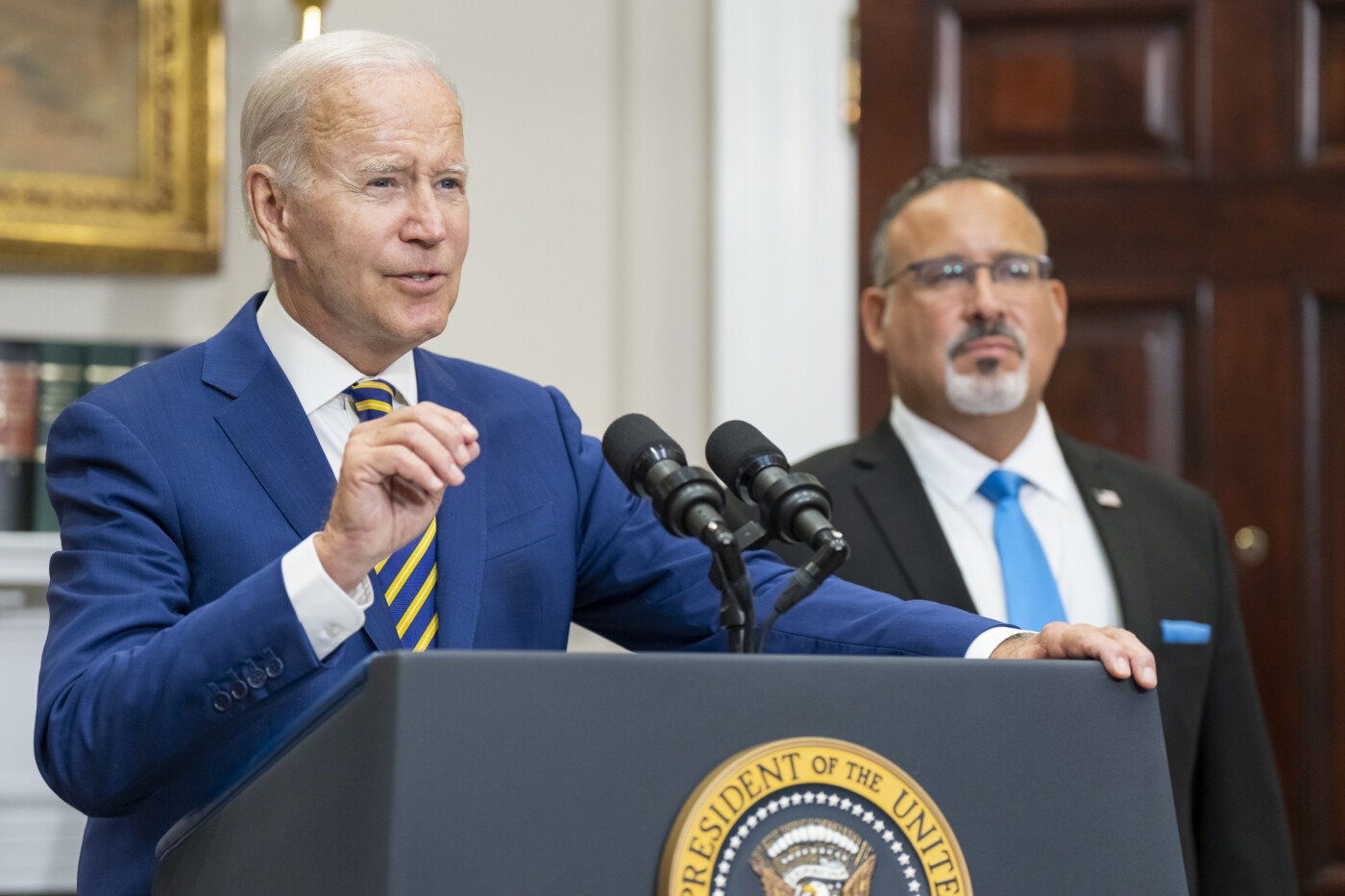 President Joe Biden made major headlines recently by laying out a student debt forgiveness programme that has attracted support and criticism in equal measure. It’s a significant piece of policy, lauded by the Democrats and slated by the Republicans – but what exactly is Biden’s plan, and why has it been so controversial?

During the 2020 presidential campaign, Biden pledged that he would provide some degree of student loan forgiveness if he was elected to office. Currently, an estimated 43 million Americans owe a combined total of $1.6 trillion in federal student debt, and around one-fifth owe less than $10,000. Since coming to office, Biden has overseen specific targeted loan forgiveness worth around $32 billion, largely for borrowers who were defrauded by their institutions or for those with permanent disabilities, but he continued to face calls from within his party to issue a broader cancellation plan. Biden indicated he would support forgiving around $10,000 per borrower, while key Democratic lawmakers called for the cancellation of up to $50,000.

On 24 August 2022, Biden entered the Roosevelt Room and laid out the details of his plan. He announced that he would forgive up to $10,000 in federal student loans for millions of Americans who earn less than $125,000 each year (or for households with a combined debt of less than $250,000). The president will also forgive $20,000 of debts for students with Pell Grants, non-repayment grants which are given to those in the greatest financial need, and he said that he would extend the temporary pause on debt repayment for the final time until 31 December. Borrowers with undergraduate loans will also be able to cap payments at 5% of discretionary income, and loan balances will be forgiven after 10 years (rather than 20) for borrowers with original loan balances of $12,000 or less.

The president added that thanks to his plan, “people can finally crawl out under that mountain of debt”.

Announcing the plans, Biden said that it would give more “breathing room” to working and middle-class families. He said: “The burden is so heavy that even if you graduate you may not have access to the middle-class life that the college degree once provided.” The president added that thanks to his plan, “people can finally crawl out under that mountain of debt”.

Senator Elizabeth Warren, one of the biggest Democratic proponents of debt relief, said: “I’m celebrating. Look, in the last 24 hours, 20 million Americans learned that they never have to pay another nickel of student loan debt, and 23 million more Americans learned that the amount they owed on their student loans when Covid hit is now substantially reduced. In addition to that, all the parents of high schoolers and people who will be going to school in the future learned that the income-determined repayment plan has changed so that anyone who wants to go to school and isn’t in a family that can write a check for that will not have to go through debt hell. And that just means life got better for a whole lot of folks in America’s middle class. So, yay.”

Some Democrats were against the plan, especially those running in competitive races ahead of November’s mid-term elections. Democratic Representative Tim Ryan, who’s in a surprisingly competitive race with Republican J.D. Vance for Ohio’s open Senate seat, said that “waiving debt for those already on a trajectory to financial security sends the wrong message to the millions of Ohioans without a degree working just as hard to make ends meet.”

The Republicans have broadly opposed student loan forgiveness, calling it unfair because the policy disproportionately helps people earning higher incomes and penalises those who saved and paid off their debts. Senate minority leader Mitch McConnell said: “President Biden’s student loan socialism is a slap in the face to every family who sacrificed to save for college, every graduate who paid their debt, and every American who chose a certain career path or volunteered to serve in our Armed Forces in order to avoid taking on debt.”

House minority leader Kevin McCarthy, a Republican from California, quickly criticised the plan on Twitter: “Who will have to pay for Biden’s debt transfer scam? Hard-working Americans who already paid off their debts or never took on student loan debt in the first place.”

How will the plans be funded?

Assuming the policy goes ahead, this is the question on everyone’s lips. According to a Penn Wharton budget model at the University of Pennsylvania, the plan will cost around $300 billion, and this would rise to $344 billion if the White House scrapped income limits on forgiveness. If the programme continues over the next decade, the cost could be as high as $980 billion.

The White House has refused to say how it will pay for the loan forgiveness, although Biden said that the “economically responsible” plan would generate around $50 billion a year when the frozen loan payments restart at the end of the year. Press Secretary Karine Jean-Pierre said that the policy “will be fully paid because of the work this president has done with the economy”, but that a fully-costed plan could not be presented because it would depend on how many eligible people apply for funding.

There are also concerns that the policy, despite Biden’s assurances to the contrary, will mostly go towards the country’s top earners at the expense of the lower- and middle-classes, who will have to pay extra taxes of around $2,000 to fund the policy. A report by the Brookings Institution found that one-third of student debt is owed to by the wealthiest 20% of US households, while 8% is owned by the bottom 20%. The Penn Wharton analysis concurred, finding that between 69% and 73% of any debt forgiven would accrue to households in the top 60% of income distribution. Cato Institute education policy analyst Colleen Hroncich said: “People in higher income households are more likely to have student debt and they owe more on average. So, most cancellation plans would benefit the wealthy more than middle-or lower-income families.” For many voters, this looks like a reverse Robin Hood policy: stealing from the poor to help the rich.

Even those economists who support Biden suggest the plan will at best cancel out any deflationary effects of the recent Inflation Reduction Act.

Lawrence Summers, Treasury Secretary under President Clinton and National Economic Council Director under President Obama, said that the funds for this policy would be better directed elsewhere. “The worst idea would be a continuation of the current moratorium that benefits among others highly paid surgeons, lawyers and investment bankers. If relief is to be given it should not set any precedent, it should only be given for the first few thousand dollars of debt, and for those with genuinely middle-class incomes.”

There are broader economic questions, not least the responsibility of enacting a massive spending bill in the middle of a recession. Even those economists who support Biden suggest the plan will at best cancel out any deflationary effects of the recent Inflation Reduction Act, while Jason Furman, President Barack Obama’s chairman of the Council of Economic Advisers, responded to the plan by writing on social media: “Pouring roughly half trillion dollars of gasoline on the inflationary fire that is already burning is reckless.”

Does Biden have the authority?

That depends on who you ask. Previously, Democrat House Speaker Nancy Pelosi, one of Biden’s closest allies, said that the president does not have the authority to forgive student debt: “People think that the President of the United States has the power for debt forgiveness. He does not. He can postpone, he can delay, but he does not have that power. That has to be an act of Congress. The president can’t do it. So that’s not even a discussion. Not everybody realizes that, but the president can only postpone, delay, but not forgive.”

This was a viewpoint echoed by Reed Rubenstein, the principal deputy general counsel for the Department of Education, who stated in January 2021 that the president does not have this power: “Given the HEA’s many specific provisions for cancellation, compromise, discharge, or forgiveness of student loan principal balances and/or material modifications to the repayment amounts or terms thereof, we believe any Executive Branch action on a blanket or mass basis, whether under 20 U.S.C. § 1082(a)(6), the HEROES Act, or otherwise, wrongfully transforms carefully cabined HEA settlement authority into a general administrative dispensing power.”

Biden has made a giant spending commitment for which he likely has no legal authority.

The Biden White House has previously faced criticism and legal rebukes for exceeding its executive and constitutional authority, and so this time it presented what it argues is its legal justification with the plans. The forgiveness is tied to the 2003 HEROES Act, which the Justice Department says gives the government “sweeping authority” to reduce or eliminate student debt during a national emergency, “when significant actions with potentially far-reaching consequences are often required”. President Trump declared a national emergency in 2020 in response to the Covid-19 pandemic, and the declaration remains in effect.

However, there are several places in which this argument falls down. In March 2022, the administration argued that the national emergency was over when it went to court to repeal Title 42, a Trump border policy that led to the deportation of migrants crossing the US-Mexico border on health grounds. Legal scholars generally agree that such substantial spending commitments are the responsibility of Congress – a June decision against the Environmental Protection Agency from the Supreme Court cited the “major questions doctrine”, which requires Congress to clearly and explicitly grant agencies the authority to employ extraordinary actions.

In short, then, Biden has made a giant spending commitment for which he likely has no legal authority, and it will therefore probably be struck down by the Supreme Court if legal battles get that far. Either way, it will probably be a win for him politically – he can head into the mid-terms with a giant debt cancellation under his belt, or hold himself up as a champion of the young if the policy gets voided by the Court. According to polls, Biden’s approval rating among young voters is 41%, but the group is not particularly energised to vote in November. However, 81% of 18-34-year-olds are broadly in favour of debt cancellation, so the policy may be a massive incentive to encourage them to vote Democrat.