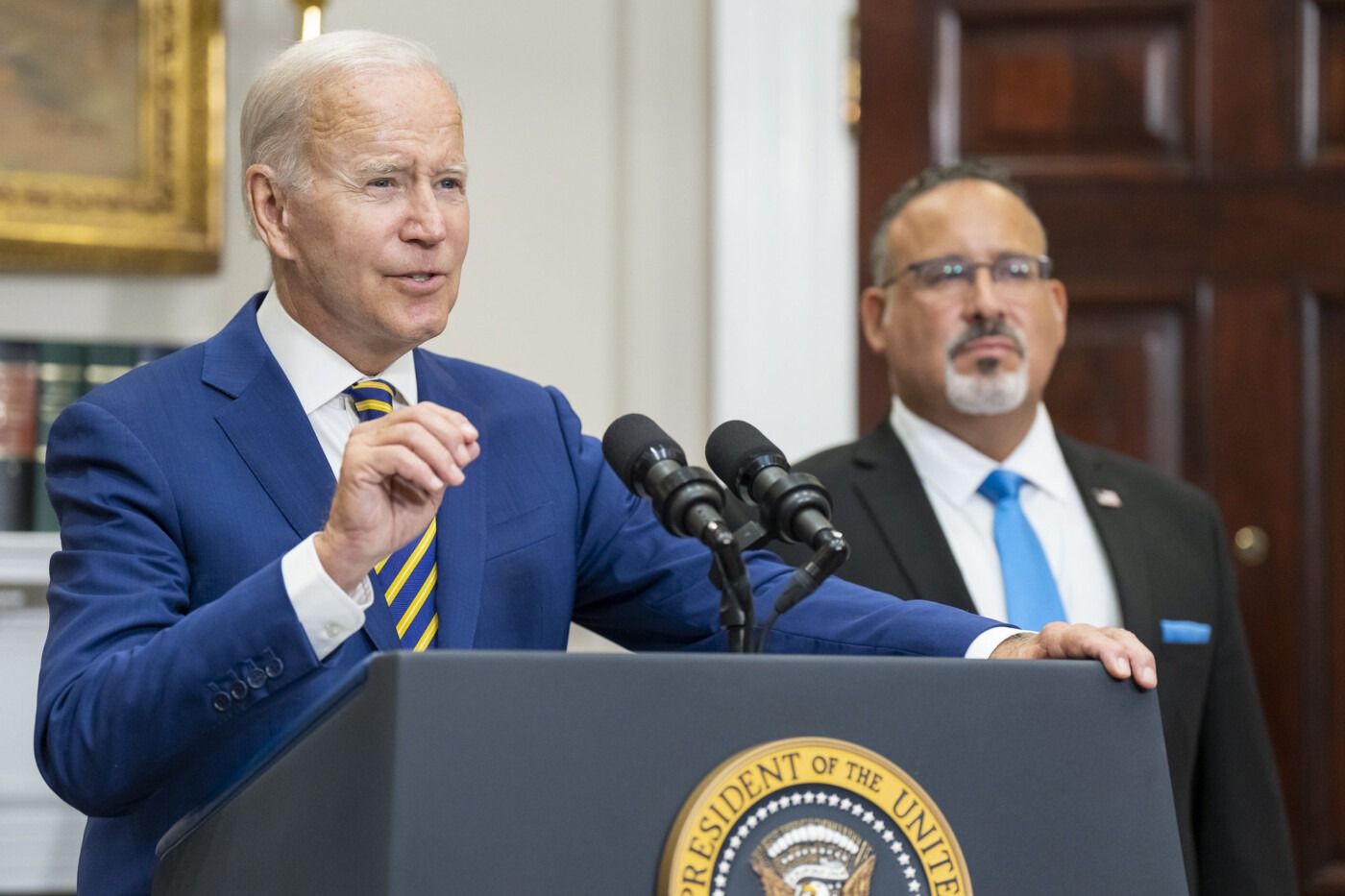 Joe Biden to cancel $10,000 in student debt for millions

US President Joe Biden has announced plans to cancel up to $10,000 in federal student loans for millions of Americans who earn less than $125,000 each year.

The president will also forgive $20,000 of debts for students of Pell Grants, which applies to those in the greatest financial need, and he will extend the temporary pause on repayments until 31 December.

Biden pledged that he would provide this support during his 2020 presidential campaign.

However, the plans have faced criticism from Democrats, who wanted the president to provide more loan forgiveness to the tune of $50,000 per borrower.

Republicans have also criticised the proposals for their fairness and their cost at a time of increased inflation and asked whether the president has the constitutional authority to enact this plan.

Announcing the plans, Biden said that it would give more “breathing room” to working and middle-class families.

“People can finally crawl out under that mountain of debt.”

He said: “The burden is so heavy that even if you graduate you may not have access to the middle-class life that the college degree once provided.”

An estimated 43 million Americans owe a combined total of $1.6 trillion in federal student debt, and around one-fifth owe less than $10,000.

Biden has said that thanks to his plan: “People can finally crawl out under that mountain of debt”.

According to a Penn Wharton budget model at the University of Pennsylvania, the plan will cost around $300 billion. If the program continues over the next decade, the cost will be $330 billion, and it would cost $344 billion if the White House scrapped income limits on forgiveness.

The White House has refused to say how it will pay for the loan forgiveness, although Biden said that the “economically responsible” plan would generate around $50 billion a year when the frozen loan payments restart at the end of the year.

Economists were divided on how the proposal would affect inflation.

Jason Furman, a Harvard professor who headed the Council of Economic Advisers during the Obama administration, said: “Pouring roughly half trillion dollars of gasoline on the inflationary fire that is already burning is reckless.”

However, Moody’s Analytics chief economist Mark Zandi agreed with the White House, saying the resumption of billions of dollars per month in student loan payments “will restrain growth and is disinflationary”.

The Republicans have broadly opposed student loan forgiveness, calling it unfair because it disproportionately helps people earning higher incomes and penalises those who saved and paid off their debts.

Senate Minority Leader Mitch McConnell said: “President Biden’s student loan socialism is a slap in the face to every family who sacrificed to save for college, every graduate who paid their debt, and every American who chose a certain career path or volunteered to serve in our Armed Forces in order to avoid taking on debt.”

A report by the Brookings Institution found that one-third of student debt is owed by the wealthiest 20% of households, while 8% is owed by the bottom 20%.

The Penn Wharton analysis also found that benefits from the executive order will mostly go toward top earners, as between 69% and 73% of any debt forgiven would accrue to households in the top 60% of income distribution.

There are also questions about the legality of Biden’s proposals. In July 2021, Democrat Speaker of the House Nancy Pelosi said: “Not everybody realises that, but the president can only postpone, delay but not forgive [student loans].” She said it was the responsibility of the legislative branch to provide debt forgiveness.

The Department of Education came to the same decision, arguing that the executive branch “does not have the statutory authority to cancel, compromise, discharge, or forgive, on a blanket or mass basis, principal balances of student loans, and/or to materially modify the repayment amounts or terms thereof”.

Legal challenges are expected, as the Biden administration has tied its authority to cancel student debt to emergency Covid measures and a 2003 law aimed at providing help to members of the military.