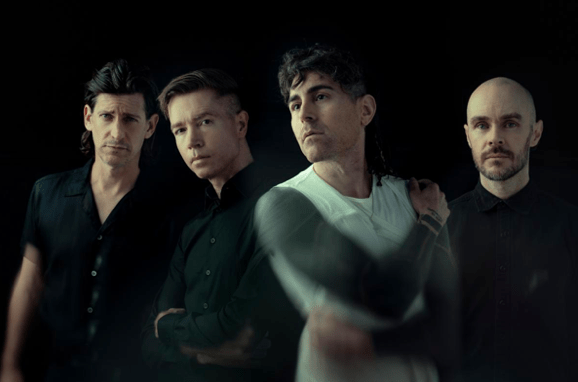 On 2017’s The Blood Album, AFI began to paint in a different shade of goth, moving away from the horror punk they pioneered to a hybrid of post punk and new wave. Four years on, they continue to stride confidently down that path with a slicker and more refined body of work, yet their self-assuredness is a little misplaced. The Cure and Joy Division have consistently enthralled their listeners throughout the years, but Bodies cannot match up.

Initially, the Californian quartet put their best foot forwards. The swirling opener ‘Twisted Tongues’ is an early standout, with its chattering drums and gritty guitars creating brooding, even cinematic levels of anticipation for the album to come. Although the dizzy heights of this track are never quite reached again throughout the rest of Bodies, a couple of the later tracks come close. The anxiety-fuelled ‘Looking Tragic’ and the effortlessly angsty ‘No Eyes’ offer punky reminders of the finesse they have attained through honing their craft over two decades.

All of these tracks are standouts because of one common trait they share: they all sound like AFI just being AFI. Of course, this is not to suggest that they’re better off staying in their lane – continuing to experiment on album eleven is laudable for certain. However, when they branch out, it seems like they’ve consumed the music of their influences like polyjuice potion. The jiving punk vibes of ‘Begging For Trouble’ are enjoyable, but the bassline is uncomfortably similar to Joy Division’s ‘Disorder’, and ‘Escape From Los Angeles’ is less of a homage than an imitation of Ian Curtis and co. Indeed, it’s even possible that frontman Davey Havok is attempting to sing like Robert Smith on the particularly Cure-esque ‘Far Too Near’ and also, at points, like Morrissey on the chorus of ‘Back To The Flesh’. The need for them to ape these other bands is questionable given the career they’ve carved out by developing their own identity – this is too much of a schoolboy error for them to make at this point in their career.

AFI also falls down on this album when they turn their hand to creating ballads. The dissonant, wobbling synths padding out the aforementioned ‘Back From The Flesh’ sound more odd than eerie and fail to hold the listener’s interest. Closing track ‘Tied To A Tree’ makes the same mistake but to a greater extent, with its dissonance coming off as grating, and the clash of its subdued verses and epic choruses feels confused. Though not a ballad, the repetitive chorus of ‘Death of the Party’, made up exclusively of the line “At the party, who was left behind?” irritates as much as the sound of nails on a chalkboard. Meanwhile, although the more guitar-orientated ‘Dulceria’ is more pleasant to listen to, it burps along directionlessly for almost five minutes and doesn’t stay with the listener for long after the album’s forty-minute running time elapses.

Bodies is not an album the listener will necessarily return to with the objective of revisiting from start to finish. However, they may certainly cherry pick individual tracks for their heavy rotation. There’s a fair amount to enjoy across the record, especially for long time fans, but a band this established should not need to lean so heavily on their influences.