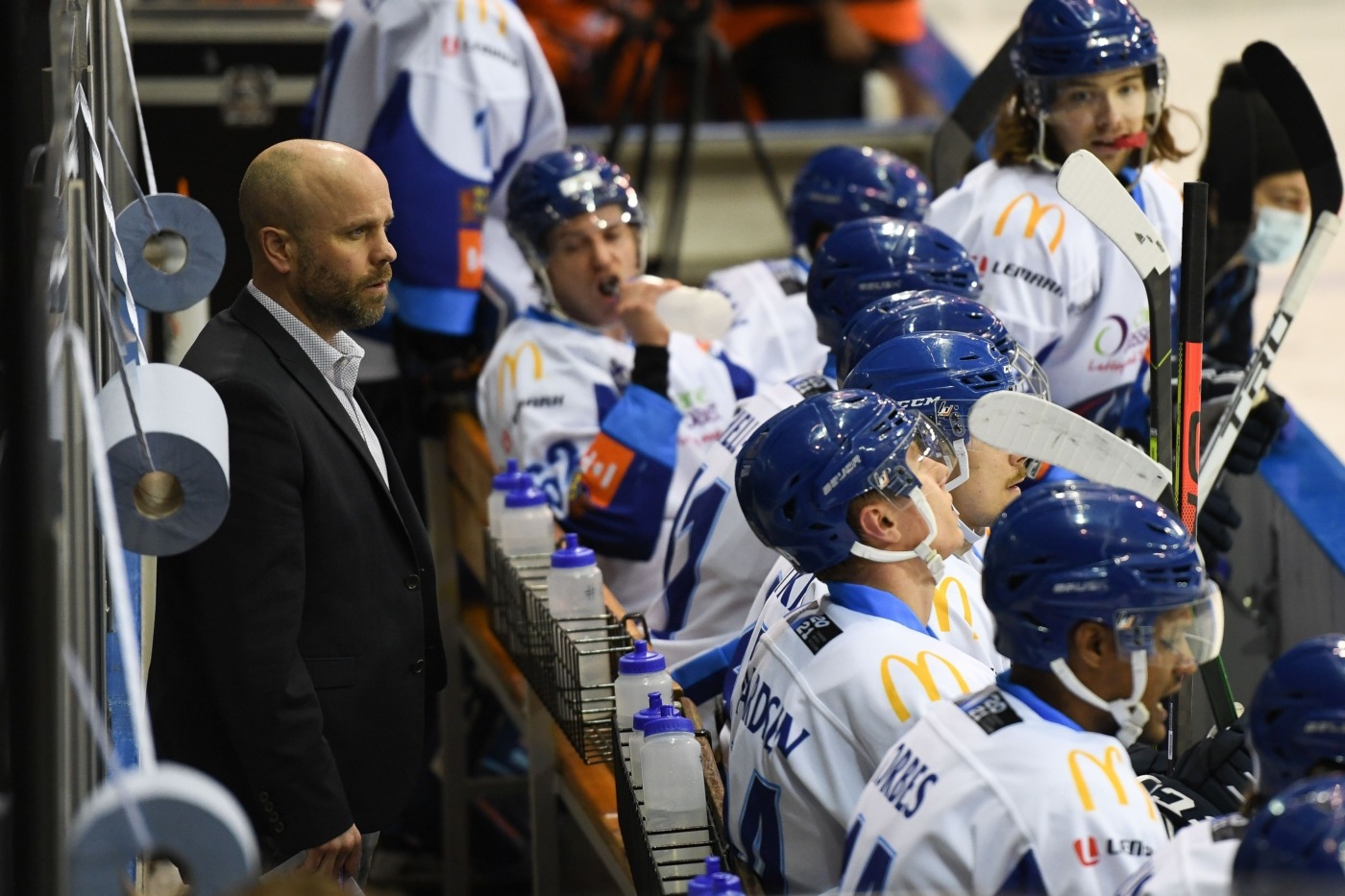 Ferrara was unavailable for Coventry’s opening three games of the tournament due to his participation in the Polish Ekstraliga playoffs and landed in the United Kingdom earlier this week.

“It’s a big boost,” Stewart said of Ferrara’s return, “it’s not just the quality he brings off the back of a very good season, it’s his presence in the room. He’s one of our leaders and I think he’ll inject some energy into the room.

“Ferrara and Laakkonen had a great partnership on the top line last season. Not only will we have a bit more [quality] going forward, but I think [his return] will also make Janne [Laakkonen] a lot better as well.”

However, national team defenceman Paul Swindlehurst will not be available for selection and remains sidelined due to a shoulder injury he sustained while playing for the Blackburn Hawks last month.

“We’re working with him every day, he’s here and in camp with us,” Stewart commented when asked by The Boar Sport about Swindlehurst’s injury status. “We’re just trying to get him to where we need him to be and just taking it one day at a time.”

Stewart added that Swindlehurst’s recovery timeline is unchanged from seven days ago, with the Team GB defenceman’s return tentatively set for the third week of the tournament.

The Boar Sport: Coventry’s third goal against the Nottingham Panthers came on the powerplay; it was scored by Sam Duggan and assisted by Vanya Antonov and Nick Jermain. You’ve shown a lot of faith in younger and less experienced players, do you feel that it’s paid off so far?

Danny Stewart: “Well, if you’d asked me that after the Nottingham game, I would have said ‘yes’… but after last night, probably not so much!

“Listen, the more time these guys get, and the more situational minutes they can play, the better.

Although guys like Jermain are still young, they’ve just come off the back of playing NCAA Division One hockey at a great programme. I mean, they’re playing against teams that are probably superior to the teams involved in this event. So, we’re, we were expecting good things from them.

“And we’ve got that, Jermain and Tristan Keck have been very good players for us early on here.”

The Boar Sport: David Clements is another player who has taken on a larger role during the Elite Series, are you pleased with how he has adapted to his leadership responsibilities and opportunities on the powerplay?

Danny Stewart: “It’s a great five-week window for him to develop his game. You know, Clem[ents] has always had puck moving ability and an offensive side to his game.

“When he came to us in Coventry, and when I got here, I felt his game was a bit raw. We’ve really had to take the four years that we’ve had [together] to shape his game, solidify him defensively and work on his mental game as well.

“He’s getting to that point where he’s pushing to be a secondary guy on the powerplay for us and this event has allowed us to give him that opportunity.

“I think he’s done well so far… although we haven’t been given too many powerplays! But you know, he’s playing a little bit of [time on the] penalty kill as well. It’s great for guys like him to be getting more situational minutes.”

On Jordan Hedley’s place in the line-up:

The Boar Sport: Before the tournament, you mentioned that Jordan Hedley could play a more prominent role. How close is he to making his first start of the Elite Series?

On Nick Jermain and Tristan Keck’s transition to pro hockey in the UK:

The Boar Sport: Your NCAA signings, Nick Jermain and Tristan Keck, scored in yesterday’s game [7-2 loss versus Sheffield]. How well have they adapted to the professional game?

Danny Stewart: “Good, really good. I think sometimes coming over for your first year as a pro overseas can be a bit daunting.

But this a good group. We’re all in the same hotel. And [Keck and Jermain] don’t have too much to figure out in terms of housing and Wi Fi and all these things. So they’ve really just been allowed to focus on the hockey side of things, and I think they’ve coped well.

On bouncing back against the Storm:

The Boar Sport: You didn’t get the result you wanted yesterday; what kind of response are you looking for from your players on Friday night?

Danny Stewart: “A strong one. I think it’s a good test for our group early on.

“We had the exhibition game and the result wasn’t great, but I thought there was a lot of good things from that game and it kind of got away from us. Last night was just strictly a poor very, very poor performance from our end. So yeah, I’m expecting a good bounce back and and hopefully we get it.”