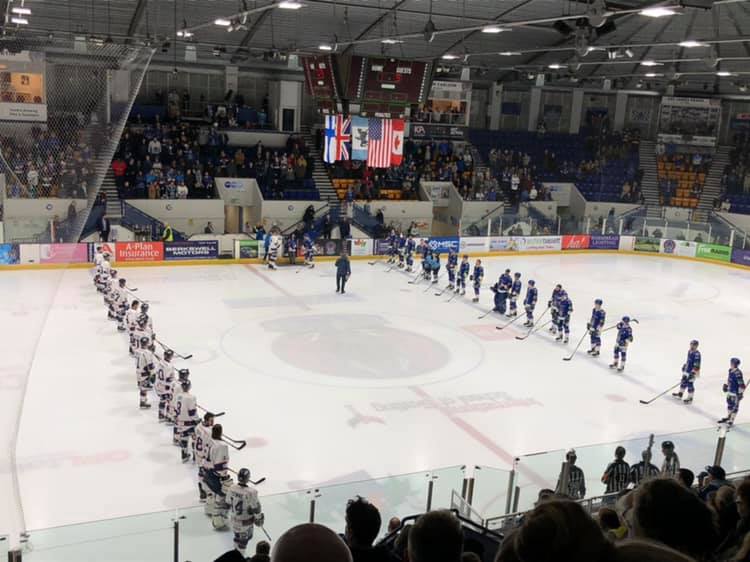 In the 35-minute interview with Ed Kimberly and Stu Coles, the former Blaze player analysed his methods at last week’s draft and revealed his system for signing overseas players.

After the Blaze confirmed the signing of American defenceman Chris Pohlkamp yesterday, Coventry will now turn their attention to recruiting four import forwards, two defencemen, and one goalie.

“Keano [assistant manager, Dayle Keane] and I spoke a lot in the days leading up to the draft, for us it wasn’t just about getting the best players,” Stewart said. “This mini-series is key for us and our future. Especially with your British core, it’s an opportunity for us to give guys situational minutes that they’re not used to.”

The Blaze head coach confirmed that goalie Jordan Hedley is likely to start games during the Elite Series. Defenceman David Clements is also in line to feature in one of Coventry’s powerplay units.

If you look at our roster, we’ve got lots of up-and-coming Brits

“We also wanted to bring in some younger Brits that we’ve noticed throughout the last couple of years and are maybe on the upside,” Stewart explained. We’ve got a great Brit core but there’s going to come a day when a guy moves on and we have to add someone to replace them.”

“This gives us an opportunity to have a look at five Brits who we wouldn’t usually have a chance to. We kept that in mind coming into the draft and that’s the route that we meant. If you look at our roster, we’ve got lots of up-and-coming Brits.”

In the second segment of the interview, Kimberley and Coles asked Stewart about his defensive draft picks.

“There were a couple of factors we thought of,” Stewart said about his decision to select Paul Swindlehurst. “He’s just finished playing in Poland, so he’ll be a little bit more up to speed than some. I think us playing in Nottingham, on the bigger ice, was a factor as well. If we were playing at the Skydome, we would probably be talking about another player.

“Swindlehurst, for his size, skates really well and is coming off a couple of really good seasons.”

The Blaze also added Cole Shudra to their roster, a player Stewart was keen to categorise as a defenceman.

“Versatility is always good to have but I picked Cole because he’s got some experience. I see him as a D-man, I’ve seen a lot of him – right from hockey school – with the Steelers, Steeldogs, and Tigers.

“I think he’s really steady, he’s got a good hockey brain. Every time I see him play; I think ‘he should be a D-man’. Unless we’re really unfortunate with injuries, he’s going to be a D-man with us.”

That’s something that’s really, really values for us at this level

Milton Keynes Lightning defenceman and Coventry University student Sam Russell will also ice for the Blaze during the Elite Series.

“He’s got a great attitude,” Stewart said of Russell. “I was taken aback by his attitude the couple of times I’ve spoken to him. He’s so eager, so keen to get better, and that’s something that’s really, really valued for us at this level.

Will Bray, Coventry’s penultimate pick in the Elite Series Draft, is a goalie that the Blaze are less familiar with but is a figure Stewart is keen to watch closely.

“I’ve heard great things about him, this was an opportunity for us to commit to some local guys. With him being the age he is, this gives us a really good chance to have a look,” Stewart said.

Stewart then turned his attention to his offensive selections.

“Mike Hammond’s vision and passing ability is as good as this division has seen,” the Blaze head coach said. “He has shown his worth playing against some of the best players in the world for GB. I know there’s a slight risk he might not be available but it was a decision we made. If we’re able to get him into our roster and build around him, he could be a good player for us.”

Cardiff Devils forward Sam Duggan joined the Blaze as the fourteenth overall pick and will return from Sweden to participate in the Elite Series.

He’s been part of a great winning culture in Cardiff, I’m sure he’s learnt a lot

“When Duggan was still available, we didn’t waste any time. He’s been part of a great winning culture in Cardiff, I’m sure he’s learnt a lot. Most importantly, his trip to Sweden was massive for his development. I spoke to him today and he mentioned being on the ice in all situations, that’s great for these guys.”

Glasgow Clan winger Mac Howlett will also feature for the Blaze and is a player who Stewart believes can play in a number of roles: “We’ve talked about him a lot over the last year and we noticed that he’s got better and better.

“He’s still only 21-years-old and I think people forget that. He’s predominantly been a winger but I see him potentially playing up the middle and having some versatility”

Coventry’s decision to select 23-year-old Ivan Antonov in the seventh round was praised across the league, with Stewart hailing the dual-national player.

“Yeh, he’s a good player: really quick, good feet and another player with a good hockey head. He’s got some skill to go along with it. He can put the puck in the net when he has the opportunity. We used him a couple of years ago and he really impressed us.”

He’s 6’2”, moves well, and has a great shot, he’s definitely a kid to watch in the future

Stewart admitted to not being as familiar with his final pick of the draft, Warwick-born Austin Mitchell King.

“Being local, we kinda knew who he was – we’ve seen him a few times. It’s been unfortunate that he hasn’t been able to play more hockey. He’s 6’2”, moves well, and has a great shot, he’s definitely a kid to watch in the future.”

Stewart also remarked on the development of a high number of right-handed players, suggesting that the current era of left-handed dominance could come to an end in the UK.

“You go to these hockey schools and they’re all righties. You obviously need your right-handed guys, so it gives us some good balance,” Stewart said as he explained his decision to select right-shot Duggan.