Great Debates: Why Ronnie O’Sullivan should be named Sports Personality of the Year

This year, Ronnie O’Sullivan rose to the top of a pool of formidable snooker talent to win his sixth World Championship title. He holds nearly every record in the game, he’s beloved by fans, and he’s widely considered the greatest of all time.

But, until now, one title has always evaded him – the BBC’s Sports Personality of the Year. He’s never even been nominated but, after a stellar tournament in a year generally lacking positive sporting news, this year feels as though it could be O’Sullivan’s time.

Since turning professional in 1992, O’Sullivan has dominated his sport. Although we know that O’Sullivan is the greatest player to ever pick up a cue, his sixth world title didn’t come easily. He shattered another record in the first match, setting a new record for the fastest victory at the Crucible.

On route to the final, O’Sullivan beat Ding Junhui, and had to recover massive deficits to defeat former champions Mark Williams and Mark Selby. At one point, erratic shot selection in the Selby match made you feel as if he wanted to go home.

Although he was the clear favourite in the final against Kyren Wilson, the path there was anything but easy. There were points when his cue action looked to fail him in the final, particularly in the second session, but this was a minor issue on the way to an incredible win. The momentum was behind him, and he swept to an 18-8 victory. This was history in the making, and it’s entirely possible that he’ll claim another, equalling Stephen Hendry’s record. ‘The Rocket’ already has nothing left to prove, and that would be the final stopper on a phenomenal career.

O’Sullivan’s talent on the table has been matched by the headlines he makes off it. Snooker is often defined by etiquette, but O’Sullivan is willing to go against the grain, criticising other players and the game that needs him far more than he needs it. He’s often cheeky and funny, straight-talking and full of humanity, and he’s box-office gold. The best of sport is driven by stories, and O’Sullivan’s – well-documented battles with his mental health – make his career achievements all the more impressive.

Even people who don’t enjoy snooker know the name Ronnie O’Sullivan – he, more than anyone else, keeps snooker on the map. And with his incredible longevity, winning World Championships in three decades and ranking titles in four, is proof that he gets better with time. O’Sullivan is now 44, but he retains his presence of mind and natural ability. In an era when snooker is dominated by new players and the standard has never been higher, the older player is still on top.

O’Sullivan should win the SPOTY award he has long deserved

As the pandemic swept the globe, we were bereft of sport, so it would be remiss of the selection committee not to recognise a genuine British sporting icon, succeeding against the odds. SPOTY has always been snobbish towards snooker – Steve Davis won in 1988 and Hendry made the top three in 1990, but that’s all the representation the sport has had since then. Now is the time to right that wrong, and to award one of Britain’s greatest sportspeople.

O’Sullivan is naturally talented and full of personality, beloved by audiences and one of the rare people to be bigger than their sport. He’s a genius, and he would be the people’s winner.

During the lockdown, snooker was watched by millions, highlighting how engrossing the sport is. With that, the magic of O’Sullivan’s playing and his snooker stardom were under a spotlight, and they shone. Few sportspeople transcend their sport through their talent – for that reason alone, O’Sullivan should win the SPOTY award he has long deserved. 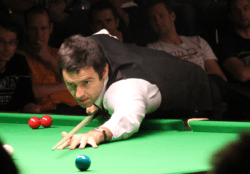