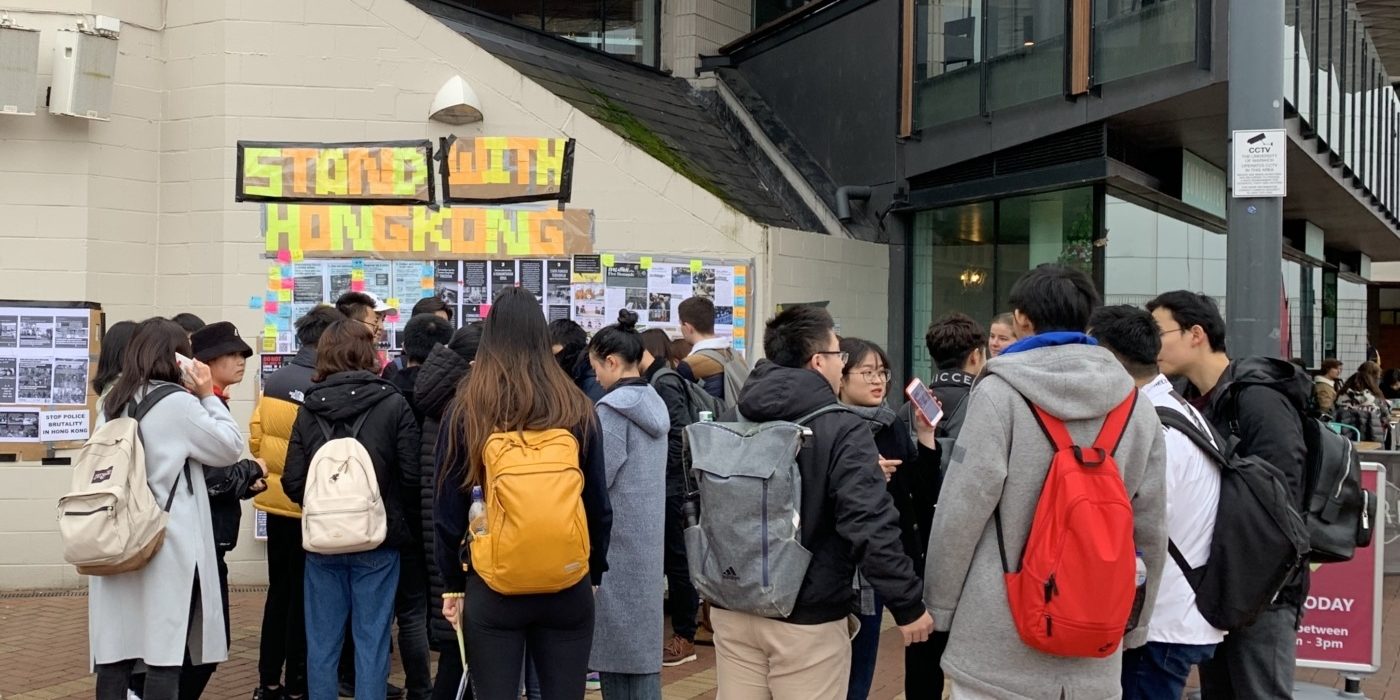 A heated debate broke out between Hong Kong and mainland Chinese students at the University of Warwick during this term’s All Student Vote (ASV) organised by the Students’ Union (SU).

The motion, to “support Hong Kong’s movement and protect freedom of expression on campus”, asked for a weekly newsletter by the union – supplemented with materials from the Hong Kong students – to be circulated regarding a semi-permanent display board in the SU Atrium, similar to last term’s Lennon Wall.

The motion also asked for SU President Ben Newsham and Democracy and Development Officer (DDO) Milly Last to lobby the University in considering “any future protest material as its property, thereby protecting them from any physical damage and forceful removal”.

It also hoped for the SU to protect the students involved in the campaigns “from malicious doxxing, cyber-bullying and death/physical threats”, and “publish a statement condemning human rights abuses” by the police and government of Hong Kong.

The Hong Kong student who proposed the motion sought “help from the international community” to condemn actions of the city’s government and police, and said: “We are voiceless when the government doesn’t listen to its citizens.”

They referred to the Lennon Wall from last term, part of which was a post-it pig mosaic that campus security took down after mainland Chinese students complained that it was racist.

The Hong Kong student said that there was “no chance to appeal the school’s decision which was based on groundless claims”, thus the University failed to “uphold freedom of expression”. Meanwhile, they said that the “voice of the SU is stronger than a bunch of individuals”.

The first student opposing the motion argued that the newsletter “supports the Hong Kong students’ complaint” and questioned the reliability and neutrality of sources for the email, especially since the students already “had a Lennon Wall for promotional purposes”.

They continued that “both sides of the story should be revealed and evaluated” as police and protestors have both used violence, citing the incident where an old man was set on fire for arguing against the movement.

Another student expressed their disagreement towards Warwick’s decision to remove part of the Lennon Wall, questioning the “lawfulness” of campus security’s actions as “no crime was committed” and reasserting “the right to freedom of expression”.

A Warwick Chinese Society member said that they reported the incident to the police and that it “hurt the mental health” of mainland Chinese students, as Warwick is “supposed to be a diverse university” for students to “explore future things in life, not a place to do political things”.

“We want the University to go back to a stable environment, a place to study in peace, enjoy our life, without criticism about our country,” the student added.

A Hong Kong student then defended the “Li pig” as a “very famous mascot” used by the protestors. They continued: “Chinese Society are not trying to take it down because they think it’s racist, but to suppress freedom of speech and expression, symbolised by taking the mural off the wall as victory.”

“Today, we’ve been trying to speak up against the Chinese government and we’ve already faced oppression,” they stated.

A mainland Chinese student turned the floor’s attention towards the pig, linking it to a racial slur against Chinese people. The student called for others to “get the truth” by “visiting Hong Kong” instead of from the media or the SU.

Another told the floor: “The University is trying to narrow the disagreement and create an environment that can exchange opinions more peacefully, but I don’t think this motion can achieve that.”

“We in China, we already have funds to support people irrelevant to the activities that were hurt,” they continued.

Bede, one of the SU’s Women’s Officers, described the statement that Chinese students are a minority as “basically completely false”.

“Suggesting that Chinese students who are not involved in SU democracy and are therefore, are a minority, is not logical,” Bede continued. “Hong Kong students have zero representation, while the International Students’ Officer is supporting the Chinese students.”

Zishi Zhang said that the coronavirus outbreak and other incidents have led to “micro-aggressions and outright racism against Chinese students on campus”, whose “voices are not being heard”

A Hong Kong student who was allegedly photographed during his seminar criticised the mainland Chinese students for repeatedly citing the arson case without having experienced police brutality in the city.

“However, me, I’ve seen a lot of things. I’ve experienced a lot of things you wouldn’t and couldn’t see on the media,” he stated, and was countered by a mainland Chinese student who cited cases of media agencies being burned in the city.

Another argued that the SU has a duty to “serve students all over the world” and “can’t be biased towards one group from Hong Kong”, adding that they “have a lot of friends in Hong Kong” and “know what it’s like”.

One Hong Kong student compared wearing masks in the city and at Warwick out of fear, after receiving “unacceptable death threats”.

Closing the motion, its proposer appealed for Warwick students to “stand with (them), fight against suppression not only here but anywhere in the world where this is also a problem”.

“I’d like to say that what we are doing here is not to propagandise or promote anything,” they concluded. “We’re just telling the truth that we are suffering and yearning for help from the international community, not here to endanger anything or attack anyone but to promote something that is valuable.”

Representing the mainland Chinese students, ISO Zishi Zhang said that the coronavirus outbreak and other incidents have led to “micro-aggressions and outright racism against Chinese students on campus”, whose “voices are not being heard”.

He described the motion as “one-sided” and “biased”, submitted by “a group of students who care about nothing but to further their own political agenda”, and urged students to vote against the motion.