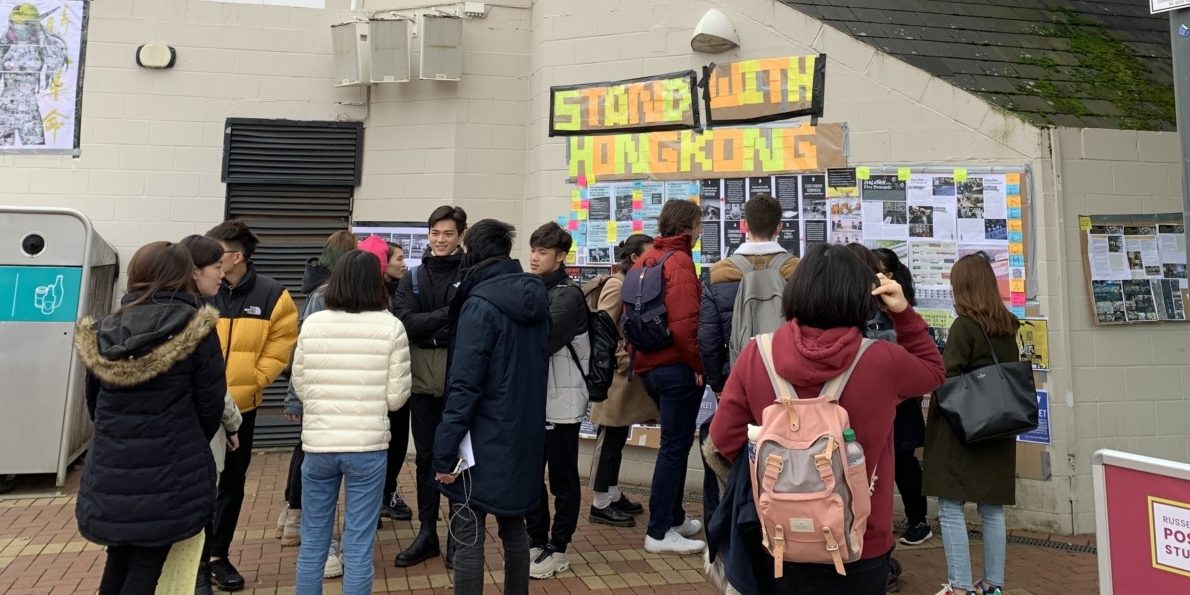 By The Boar
Nov. 29, 2019
Posted in Elsewhere at Warwick, Global student stories, News

A Hong Kong student at the University of Warwick is “worried” for his safety after he was secretly photographed by his mainland Chinese classmate during a seminar.

He was identified the day after he campaigned at the Lennon Wall which was put up at the Piazza during Reading Week.

The student, who gave his name as Florian, said he submitted a complaint to campus security but received no response, despite efforts to follow up on the case from himself, his personal tutor and the head of his department, who told him that there has been “no progress” on his case from the disciplinary office.

It was reported that photos of Florian were subsequently circulated on WeChat among mainland Chinese students at Warwick.

Florian approached the mainland Chinese student after he realised he was being photographed during the seminar. He alleges that he was pushed aside and the student walked out.

The Hong Kong student told The Boar that his classmate has tried to “reach out” to him since, saying that there was “some misunderstanding”. Florian turned down the request, citing that the mainland Chinese student “could have talked to (him) right after the incident”.

“I’m worried about my safety around the campus – I don’t know when or how or what they’ll do, so I need to be quite cautious wherever I go,” he said. Florian also expressed worries that his photograph will be “sent to the Chinese Embassy (or) Warwick Beijing Office”.

Upon enquiry, the University told The Boar: “We are aware that a formal complaint has been submitted and, accordingly, we cannot comment further on ongoing investigations.”

We are aware that a formal complaint has been submitted and, accordingly, we cannot comment further on ongoing investigations

Other Hong Kong students at Warwick have also complained about the University’s administration when handling issues pertaining to them and the Lennon Wall.

The student who booked the Piazza space for the wall received an email where the University’s Piazza Bookings team chastised her for committing a “clear breach of (their) grant of permission”, as the students did not follow “very clear” instructions to put up the wall from 9am to 5pm with all material in English.

“Your application and the two original images you sent, did not make any reference to a specific image that you would be creating on the wall, simply that you would have post-it notes for people to write on,” the email read.

On the mosaic “Li pig” made of post-it notes that was put up as part of the wall, which was taken down following complaints from mainland Chinese students that it was “racist”, the bookings team said: “If this was such an important part of (the wall), I am surprised you didn’t mention it during the application process.

“Given the number of applications that are made each year we trust that applicants give us all the impertinent information, this ensures there are no surprises.”

In an email response seen by The Boar, the student who made the application on 11 October explained that the bookings team’s prior response time in granting permission for the wall – which took three weeks – caused her concern as to how long it would take for them to approve additional requests.

The team responded to her on 3 November, giving her the option to put up the wall from 9am to 5pm on 5 November. Given two days to decide whether to proceed, she continued that the Hong Kong students had to begin assembling the wall at midnight that Wednesday because it took eight hours to complete the installation.

We would also like to know why it is necessary to tell you about the pig in the first place, as if it would have affected you decision to grant permission?

“We would have to remove the wall by the time we have finished setting up,” the student said, adding that all non-English material on the wall was accompanied with translations.

The student added that there is “incoherence” that the bookings team is “surprised” by the pig. While the slogan “Stand with Hong Kong” was not “made specific reference” to in her application, the team “did not question why” they weren’t informed.

The pig, however, “was questioned with so much attention, after receiving complaints by the dissenting party” which were “plainly false accusations”. The student defended the pig as a mascot of the protests commonly used as a sticker on encrypted messaging app Telegram, not a “racist” symbol.

The bookings team responded: “If you intended to create a specific image, i.e. the pig, you should have told us in the first place.”

“Any future booking that you or your group make will now be under much more scrutiny,” they concluded.

In an email response, the applicant said: “We would also like to know why it is necessary to tell you about the pig in the first place, as if it would have affected you decision to grant permission?

“If such information is required, you should have made it clear that you need to assess the content that we would put onto the wall before giving permission. But if that’s the case, the requirement is simply an act of censoring the content, thereby destroying freedom of expression on campus.”

The applicant has since demanded an in-person meeting with those in charge of Piazza bookings.

As a result of the removal of the pig, the Hong Kong students have also launched a petition “to call for the UK to stand with Hong Kong for freedom and democracy”. The Boar was told that it had gathered over 200 signatures.

UPDATE (2/12/2019): Responding to The Boar‘s enquiries regarding booking the Piazza, the University said: “The request came in on a Friday 11th October asking for the display to be positioned on Monday 14th. This sadly ignored the minimum 7 days notice rules for such requests.

“The request could have simply been rejected on those grounds alone, but in fact the requesters were contacted on Sunday 13th October (NB out of normal office hours) in an attempt to help them reshape their request into something that could be actioned – that then started a process of several conversations which did result in the event taking place.”

Gallery image with caption: What happened in this term’s All Student Vote?