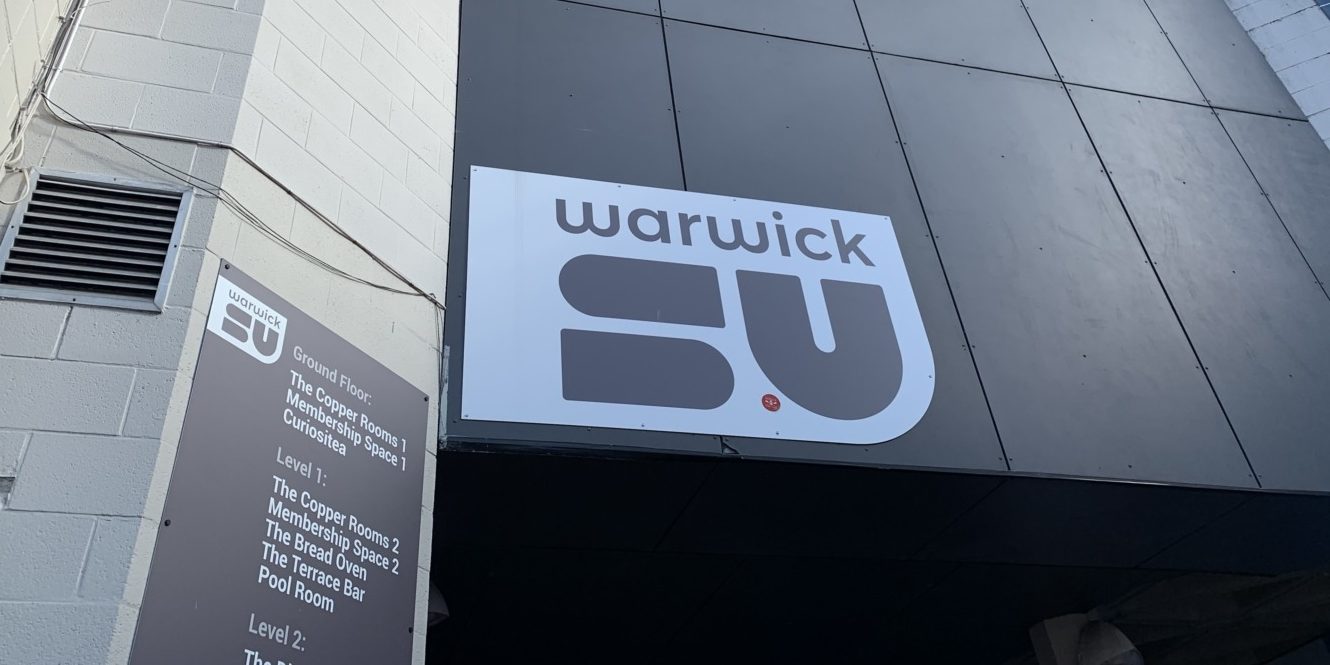 Warwick Students’ Union (SU) has responded to a list of demands made by Warwick Occupy in a statement, apologising to the group and students affected.

Warwick Occupy was established at the University on 19 November, when former Israeli Defence Forces (IDF) colonel Eyal Dror was invited by Jewish Israeli Society (JISoc) to give a talk, supported by StandWithUs, a pro-Israel organisation.

Following protests both inside and outside the talk, students – most of which are from liberation societies such as Friends of Palestine (FoP), Warwick Pride and Warwick Labour – marched to the SU and began occupying the building.

Warwick Occupy subsequently released two sets of demands; one for the University, and the other for the SU.

In a statement released on 18 December, Warwick SU apologised “unreservedly to all who were ignored, threatened or caused to feel unsafe as a result of the event”, and for their “failure to adequately respond”.

“The Students’ Union accepts that we did not acknowledge the strength of opposition to this speaker in a statement that we issued on the day (the SU had received a petition of almost 300 signatures in objection to the speaker being here), and that this contributed to an atmosphere where certain individuals felt emboldened to use racist rhetoric against Palestinian, Muslim, Black and Brown students,” read the statement, which was signed by all members of Warwick SU’s Sabbatical Officer Team.

“We were aware of the nuanced differences of opinion about the event and, in an attempt to appease ‘all students’, we failed to support the students that had called on us to help.”

Warwick SU has responded to all 11 of Warwick Occupy’s demands “with an overall commitment to changing the culture and processes of the Union to be proactively anti-racist; listening to and centring the voices of our most marginalised student members”.

To the first demand, “rights for the occupiers”, the SU responded by outlining that “in negotiation with Warwick Occupy…a Code of Conduct for the occupation” was introduced.

The SU also fulfilled Warwick Occupy’s second demand for “a new statement on the events” from the union.

For the third demand – an investigation regarding the invitation of Colonel Dror onto campus – the SU outlined that “a timeline of events for the speaker request has been produced and provided to Warwick Occupy detailing the University’s approval process for the event” and that “issues identified as part of this investigation will be fed into the review of the External Speakers Process”.

Part of the External Speakers Review will entail the SU “looking into (their) relationship with the University with regard to processing external speaker requests and making this relationship clearer to students”.

We were aware of the nuanced differences of opinion about the event and, in an attempt to appease ‘all students’, we failed to support the students that had called on us to help

The SU further said that it is treating allegations against the conduct of Venue Managers with “utmost seriousness and will follow due process to resolve the situation as efficiently and effectively as possible.”

On the fourth demand, the union said that “Warwick Occupy have been made aware of the process required for any investigation to take place and have been encouraged to begin this process.”

They will be “looking into past complaints” and “ensure a proper review is done into (the) current complaints process – whilst also putting the complaints system on the agenda” for the Equality, Diversity and Inclusion (EDI) review.

They added that while an All Student Vote (ASV) “is required for the SU to ban any speaker from campus”, whether “that process is fit for this purpose is open for discussion in both the External Speakers Review and Democracy Review”.

With regards to investigating the “wider institutional racism” within the SU, the union “has guaranteed that Warwick Occupy, Liberation Societies and other student groups will have a chance to feed into (the) process” of the “already approved” EDI review.

For the next demand for an investigation “into, and the undoing of, colonial legacies on campus”, the SU have said that their plan in “ensuring the sustainability” of work already in place is two-fold: to prioritise the Decolonise Project in its 2020 project and “lobby the university to implement the Decolonise Project into its EDI, social inclusion and curriculum review work”.

Warwick Occupy also called for “a stop to the targeting of Palestinian, Arab and Muslim Groups”, to which the SU responded that they were “at no stage targeting or surveilling students”, and “have produced a briefing on the Union’s connection to the PREVENT agenda through our relationship with the University, and how this affects our anti-PREVENT policy”.

The union also aims to “assess” their relationship with campus security and PREVENT, committing to “taking proactive efforts to not silence students” through collaborating with liberation societies.

The ninth demand for protection for Sabbatical Officers will be fulfilled by the SU who, “going forward”, has “committed to not releasing statements signed off by the entire team if they have not been proactively agreed to and sufficiently understood by the entire team”.

In response to the penultimate demand for “changes to the democratic and anti-oppression structures within the SU”, the union said that “meetings have begun regarding the Democracy Review with Warwick Occupy”.

Warwick Occupy’s final demand was for the SU to “lobby the University on anti-racist issues” and “support (their) collective in future occupations”.

The union said that they will meet Warwick Occupy at the start of Term 2 “to review their progress on their demands with the University, and offer guidance and support towards achieving them”, but they “are unable to unequivocally commit (their) support for future occupations without knowledge of their specific demands and context”.

Warwick SU firmly commits to tackling Islamophobia, anti-Blackness, and other forms of racial discrimination experienced by members of Warwick Occupy and ethnic minority students across campus

In their statement, Warwick SU further apologised for “not acknowledging the petition in (their) statement” and stated that it “accept(s) that the SU could have done more to support students who were subjected to racist, Islamophobic, homophobic and sexist abuse online” and offered an “unequivocal apology to all those affected”.

The union added that it “absolutely and unequivocally condemn(s) the attacks that Muslim, Palestinian, Black, Brown, LGBTUA+, Jewish and other students have been subjected to, both online and on campus”.

“Warwick SU firmly commits to tackling Islamophobia, anti-Blackness, and other forms of racial discrimination experienced by members of Warwick Occupy and ethnic minority students across campus,” the statement read. For this, the SU “must be actively anti-racist”.

The SU also expressed that it wants to work alongside Warwick Occupy in the future again “to better support the wellbeing of all ethnic minority students and actively oppose all forms discrimination on our campus” and “continue consulting” with them, along with other student groups “to inform a number of important pieces of work to make change at Warwick SU”.

“In acknowledging this, we also recognise that Jewish students have been significantly affected by our actions and feel let down as members of the Jewish community, regardless of their views on recent events,” the statement added.

“We want to take this opportunity to express our support and solidarity with the Jewish community at Warwick and emphasise that we are committed to fighting all forms of racism, including antisemitism.

“The upcoming reviews will have significant consultation with student groups, including Jewish students, ensuring that working with our student communities is an essential part of all that we do as an SU.”

Following the SU’s statement, Warwick Occupy released one of their own. It said: “On 19th November 2019, we gathered as a group of disperse and diverse students in protest against an event which whitewashed the crimes of the Israeli Defence Force.”

The statement confirmed that the occupation has ended after 30 days on 18 December and that they were “leaving as a collection of friends and siblings committed to the anti-racist struggle”.

“We have opened up a new front in Warwick towards the eventual freedom of Palestine – and by extension – all people,” Warwick Occupy continued.

The group concluded by stating that they would “now turn (their) sights to the University”, to whom they have also presented a set of demands.

Warwick University and College Union (UCU) tweeted their support to Warwick Occupy, stating that it “welcomes” the SU’s “engagement” with Warwick Occupy and “(looks) forward to working alongside the SU and Warwick Occupy to fight racism on our campus in all forms”.

In a statement put out on 19 December, JISoc described the SU’s response to the student group as “an embarrassment” and “grossly misleading”, “littered with wishy-washy insinuations”.

We want to take this opportunity to express our support and solidarity with the Jewish community at Warwick and emphasise that we are committed to fighting all forms of racism, including antisemitism

“Despite repeated assurances that Jewish students would be regularly consulted on issues regarding the so-called ‘occupation’ of the SU, this has sadly proven to have been a false promise,” the society wrote.

“The failed attempt to shut down the talk through intimidation and violence was disturbing. It is saddening, although unfortunately not uncommon, that we required security personnel to protect Jewish students and other attendees from those seeking to cause trouble

“We fully expect the wider student community to seek to protect external speakers’ rights to free speech, regardless of their country of origin. In this vein, we expect the SU to uphold and defend the right for all societies, including the Jewish Israeli Society, to host educational events without fear of intimidation.”

JISoc said that the SU’s “claim to demonstrate a commitment to ‘fighting all forms of racism’ is utterly contemptible in it’s (sic) hypocrisy, overlooking the SU’s past and present failure to show equal concern for, and interest in, the wellbeing of Jewish students at Warwick.”

They alleged that Ethnic Minorities Officer Taj Ali has “acted to the detriment of Jewish students”, based on “photographic and video evidence of intimidating and aggressive conduct” during the talk and the statements he made during the Student Council meeting.

The society also reported “targeted intimidation of Jewish students on and off campus” and that the SU failed “to adequately deal with several individual complaints of antisemitism”.

Adding to his response to JISoc on Facebook, Mr Ali told The Boar: “It’s deeply frustrating to see the misrepresentation of a peaceful protest against Islamophobia and the whitewashing of apartheid. Both the protestors and campus security can testify to the fact that the protest was peaceful and no violence took place.

“Jisoc have also deliberately misrepresented what was said at student council. Never once did I refer to the ‘Jewish community’. I referred specifically to Angus Taylor’s own conflict of interest as he receives funding through the Emerson fellowship programme from the Islamophobic standwithus organisation that we peacefully protested against. Defending Palestinian rights and opposing antisemitism are not mutually exclusive.”

Warwick Occupy, JISoc and SU President Ben Newsham have been contacted for comment.