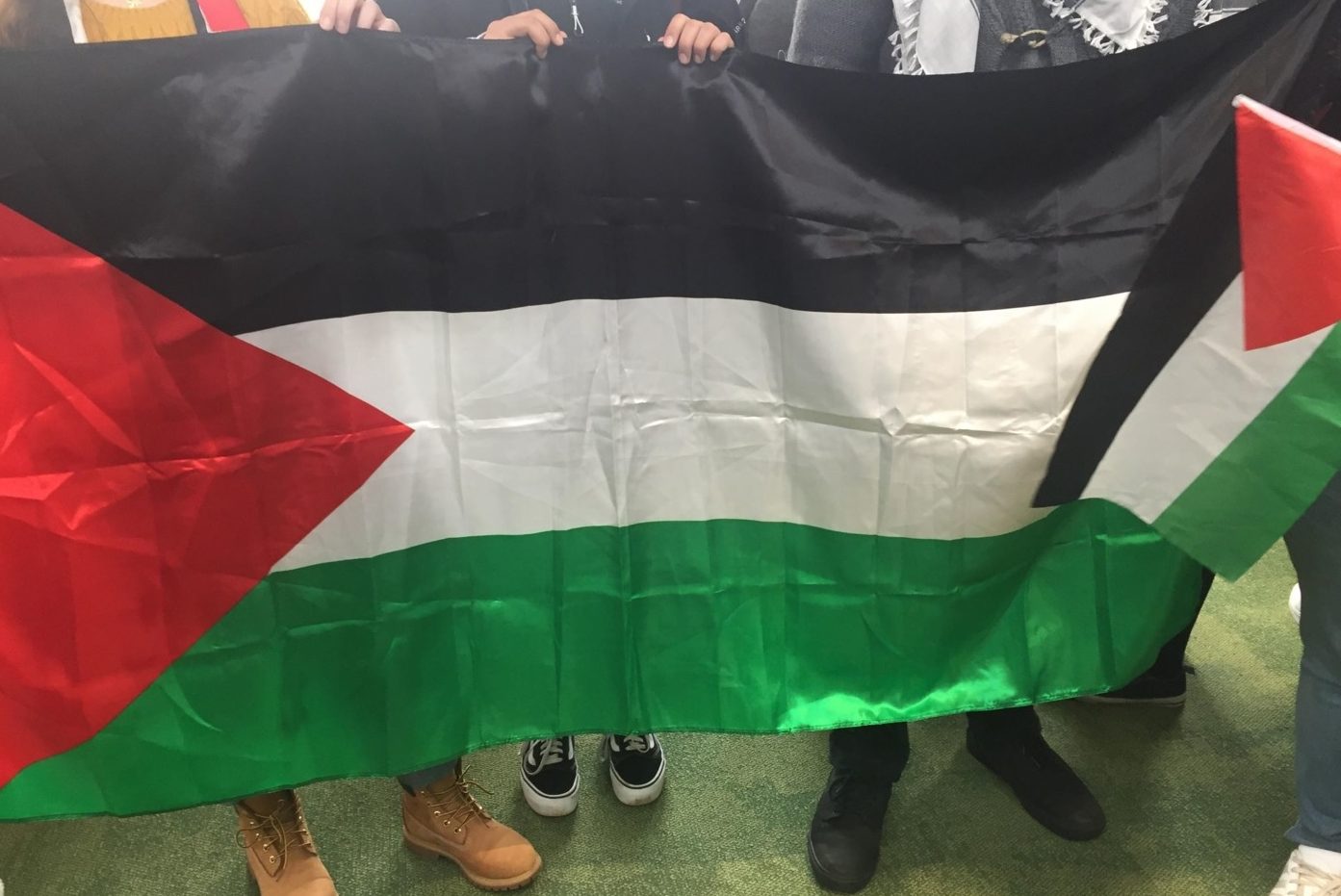 Warwick Occupy, who has been occupying two rooms in the Students’ Union (SU) headquarters for four weeks, has declared that they will persist over Christmas if their demands are not met.

The group of students at the University of Warwick was formed on 19 November, when former Israeli Defence Forces (IDF) colonel Eyal Dror was invited by Jewish Israeli Society (JISoc) to give a talk, supported by StandWithUs, a pro-Israel organisation.

Following protests at and outside the talk, students – most of which are from liberation societies such as Friends of Palestine (FoP), Warwick Pride and Warwick Labour – marched to the SU and began occupying the building.

In a statement released on 7 December, Warwick Occupy alleged that the SU is “institutionally racist” and “cannot represent students of colour or effectively lobby the university to do the same”.

The group accused the SU of a lack of action, despite providing SU officials, including President Ben Newsham, “screenshots and video footage documenting instances of doxxing, harassment and Islamophobia against members of the occupation, incited by ‘StandWithUs’ and associated persons on campus”.

Their demand for the SU to “release a statement condemning ‘StandWithUs’ for its Islamophobia” was rejected by Mr Newsham on the grounds of the SU’s “apolitical” stance, which Warwick Occupy claims is “a political position as it reinforces and reproduces dominant power dynamics”.

“Since we are students of colour, apparently our existence is too ‘political’ for our SU to defend,” the statement read. “Student Unions are under no obligation to be ‘apolitical’ entities; this is a conscious decision by our President to ignore our voices and dehumanise us.”

They further accused Mr Newsham of “avoiding personal responsibility and accountability” and being “complicit in the racism of this institution”. Mr Newsham is yet to respond to The Boar’s enquiries.

Warwick Occupy reiterated that they are a “fundamentally anti-racist” group who is also “against anti-Semitism”. They “emailed every single cultural society on campus including JISoc” in an effort to represent all “perspectives on campus that were not being seen”, and “recognised JISoc as ethnic minorities”.

The statement concluded that they “will remain in this building for as long as it takes for this SU to represent us in a way that is satisfactory as per its own mandate”.

Warwick Occupy confirmed to The Boar that this meant they would be “indefinitely remaining” in the SU “throughout Christmas” if their demands are not met.

The release of the statement also follows a Student Council meeting on 3 December in which Warwick Occupy presented their demands. Student Council is attended by the Chair and Deputy Chair of Student Council, Full-Time and Part-Time Student Officers and Chairs of SU Execs.

Warwick Occupy told The Boar that two SU Exec members, one of whom holds a leadership position within JISoc and another who is a member of JISoc, “confronted” Ethnic Minorities Officer (EMO) Taj Ali, who led the marches on 19 November at the meeting.

Both of these members are reportedly recipients of the Emerson Fellowship from StandWithUs, who publicly stated their support for JISoc on 10 December. Following the council meeting, JISoc released a statement against Mr Ali and called for his immediate resignation after he “failed to represent” Jewish students at Warwick.

Speaking to The Boar, Warwick Occupy said that JISoc “pointed questions directly at Taj [for] not representing minorities” at the Student Council meeting and that allegations against the EMO in a statement released by JISoc following the meeting were “disproportionate” and “untrue”.

According to Warwick Occupy, Mr Ali responded saying he had a “moral obligation that pervades out of politics, in that the speaker on campus will cause direct harm to Palestinian students”.

Warwick Occupy expressed their “upset” as they “didn’t get to speak” about their agenda due to the “back and forth” between the JISoc members and the EMO. After the exchange concluded, one of the SU’s Women’s Officers Bede Pharoah-Lunn submitted a “procedural motion to discuss the occupation”, but by then, the JISoc exec members had left, Warwick Occupy said.

Regarding the Council Meeting, JISoc told The Boar that “fifteen minutes were put aside to discuss the ongoing so-called ‘occupation’ of the SU”. During this period, JISoc president Angus Taylor “engaged in a formal conversation with the Ethnic Minorities Officer, Taj Ali”, they said.

JISoc said that Mr Taylor “asked what Taj Ali had done to represent Jewish students” and allege that Mr Ali “was unable to present a single example”. They said that “rather, Taj Ali said there was a “conflict of interest” in representing Jewish students and tackling racism on campus”.

The society added that “once the Jewish students in attendance had left” a procedural motion was passed and “members of the so-called ‘occupation’ spent 10 minutes discussing the issues at hand in the absence of any JISoc representation”.

According to Warwick Occupy, one member of the occupation group then also directed a question to the non-EU International Students’ Officer (ISO) Zishi Zhang regarding his stance on Warwick Occupy, as “the Israeli-Palestinian issue is an international issue”.

Warwick Occupy said that the ISO showed “no interest in the occupation” and voted against enabling the students to elaborate on their agenda.

They added that Mr Zhang thanked campus security for stopping Hong Kong students from setting up stalls and protesting. The student group described this action as “ironic”, as campus security “implements Prevent against Palestian and other international students”.

Responding to Warwick Occupy, Mr Zhang allegedly said he is “not obligated to have a stance” and deferred to SU President Ben Newsham, who “did not say anything constructive” in his reply.

The group alleged that they have been subject to intimidation since their occupation began. They claimed to The Boar that one Warwick student would “sit outside” the rooms “every day”, singing songs such as “Jerusalem” and “waving the Israeli flag”.

In another instance, Friends of Palestine Society invited Gaza journalist Ahmed Alnaouq to speak at Warwick on the 17th day of occupation. During the talk, Warwick Occupy alleged that exec members of JISoc “showed up drunk” outside the occupied rooms during the talk, attempting to cause disruption.

In comparison to the talk hosted by JISoc, no campus security was present and “no one checked on the external speaker”, Warwick Occupy said.

In response the allegation that members of JISoc showed up intoxicated outside the occupied rooms, the society said that the SU building “is open and accessible to all students at Warwick, including Jewish students. Irrespective of disruption, Jewish students will continue to use the building, whether that be during the day or for a night out.”

Moreover, regarding Warwick Occupy’s comment that they had emailed all cultural societies including JISoc to represent perspectives on campus that were not being seen, JISoc said: “We have raised our concerns through the formal mechanisms of the Students’ Union, and will continue to do so.”

Warwick Occupy is now circulating a statement calling for signatories to show support, while Mr Ali is “considering legal action for defamation”.

In a statement responding to StandWithUs, Mr Ali also said “Isoc executive members (including [himself] as a former exec member) were amongst those who signed the initial statement against” the talk by Eyal Dror.

“Our liberation, as marginalised ethnic and religious groups is part of the same struggle,” he continued. “It is unfortunate that you can’t see this and are happy to take money from such an organisation and seem to be wholly uncritical of them.”

Warwick Occupy told The Boar that despite recent events, “massive progress” has been made with regards to their other demands. They have also received support from external organisations, former Warwick SU Education Officer Larissa Kennedy and various Warwick professors such as Dr Katja Laug and Professor Nicola Pratt.

“The occupation is bigger than the protest now,” the group said.

President Ben Newsham and ISO Zishi Zhang have been contacted for comment.