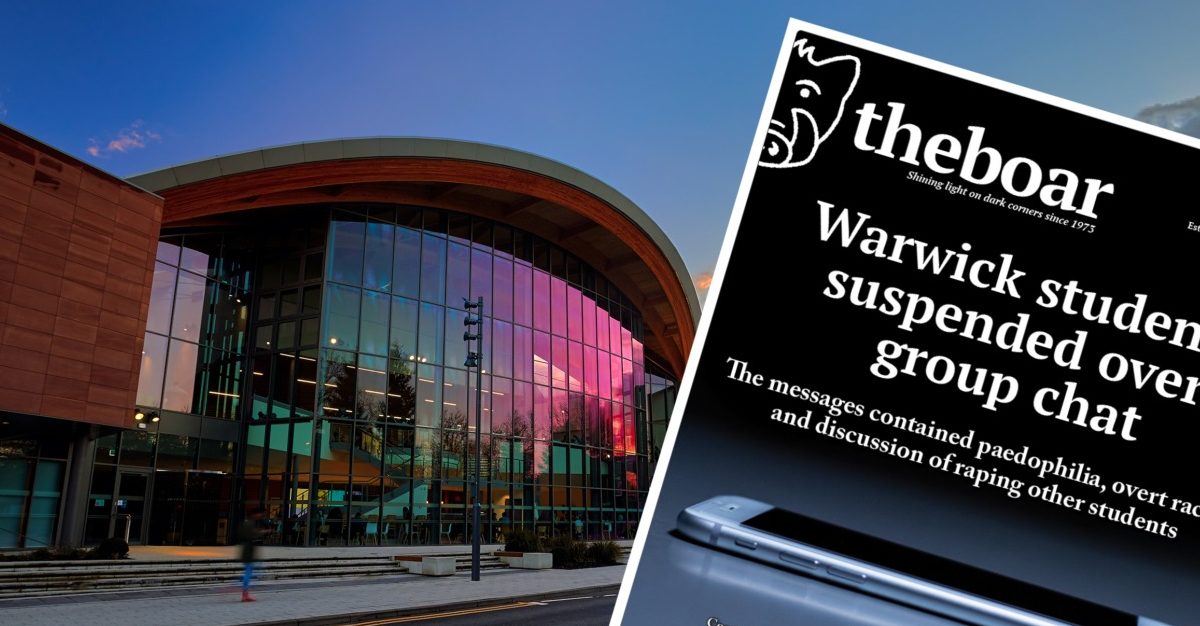 An investigation by The Boar into the aftermath of the Warwick group chat scandal has revealed that students originally banned from campus are set to return next academic year, following an alleged lack of transparency on the part of the University.

The students’ return follows an appeals process completed over summer that significantly reduced some of their punishments.

It is understood that two individuals who were originally banned from campus for 10 years have had their punishments reduced to one year after appealing. This means that both will be able to return in the 2019/20 academic year.

This also means of the five students originally required to leave or withdraw from the University, four will return next year, the exception being one student who chose to withdraw.

Despite the University issuing a press release to announce the original outcome of the disciplinary proceedings in June, there have been no official announcements from the University regarding the latest appeals process.

The original complainants also heard the University’s initial ruling from the press, who were informed before they were.

When asked by The Boar in October 2018 whether any of the appeals had been successful, or if any disciplinary action had been altered, the University stated only that none of the individuals would be back on campus this year. They stated that “the two original complainants should have completed their degrees before any of those five individuals are due to return to campus” – commenting that they could not say any more due to “duties of confidentiality”.

The complainants raised concerns over the alleged “deceitful” nature of press releases issued by the University. In response, the University stated to them that as well as “the need to protect all parties in the investigation and maintain an appropriate level of confidentiality”, the “timing and nature” of the press releases was based on “press interest”.

After learning of the outcome of the group chat students’ appeals process, the original complainants submitted a Stage 3 complaint to the University. The request to advance to Stage 3 was rejected by the University as “its final decision”, with Vice-Chancellor and President Stuart Croft determining that there were “insufficient grounds” to progress the complaint. This decision was taken by Stuart Croft as the Provost, who would normally make the decision, was involved in previous aspects of the complaint.

Despite the University issuing a press release to announce the original outcome of the disciplinary proceedings in June, there have been no official announcements from the University regarding the latest appeals process

Furthermore, it is understood that the complainants had to ask repeatedly for the results of the appeals process, despite being in regular contact with the University.

The second appeal was held in late September, and the complainants were finally provided the outcome on 19 October, three weeks after they were told “it will be with you next week”.

Due to the Student Complaints Procedure, the complainants could not make an official complaint against the University until the outcome of the appeals process had been delivered to them.

This alleged lack of transparency is compounded by accusations of a lack of communication between those handling the complaint and other areas of the University.

Some lecturers and members of staff in the students’ academic department have not been formally told of the outcome in the appeals process and are unaware of the changes. Others have expressed concerns over teaching the students when they return, and how the University expects them to facilitate seminars.

When contacted for comment by The Boar, the University at first maintained that they will not be issuing further statements on the matter.

Some of the students involved in the group chat were named online by other press outlets during the summer. The Boar asked the University how it intends to ensure their well-being and safety when they return to study next year, to which they declined to comment.

Several hours later however, the University contacted The Boar again to comment: “The University’s focus since the conclusion of the investigation and disciplinary processes has been, and remains, to work to ensure that anyone involved in this matter who remains a student at Warwick is able to complete their studies while minimising any further contact between the original complainants and anyone who received a sanction from the Discipline Committee.”

One of the complainants told The Boar: “I wanted to do a masters here but that’s not an option anymore. Other girls who were named and talked about in the chat are still going to be here next year in the same department.”

Following the revelation, President Liam Jackson told The Boar on behalf of the Students’ Union: “The Students’ Union would urge anyone who has been affected by this story to come speak to us so we can help support in any way we can.

“It is absolutely clear that the University’s disciplinary processes need changing as soon as possible, and the Union will continue to push for this in the coming days and weeks.”

The story first made national headlines in May after being broken by The Boar, with protests on campus against rape culture following after. The University announced the outcome of their initial investigation in June, with two students originally banned from campus for 10 years and a third for life.

In October, there were reports that some students had returned to campus this year that were not originally supposed to, which was denied by both the University and the Students’ Union. However, the University did not clarify at the time on whether any of their initial outcomes had been altered.