Increasing unconditional offers being distributed to high school students by universities have sparked concern from the government, the Universities and Colleges Admissions Service (UCAS), university watchdogs, college unions and more.

UCAS recently found that the total number of unconditional offers made to 18 year-old students from England, Northern Ireland, and Wales has increased by almost 66,000 from 2013 to 2018. Since last year, there has been a 32% rise.

UCAS published the figures on offer-making patterns for the first time, after they stated in June that they will “ensure transparency throughout the admissions process” following accusations of “racial profiling”.

Regarding unconditional offers, UCAS said that they have been traditionally offered to mature students who have already received adequate qualifications, creative arts students that have been interviewed or submitted portfolios.

According to UCAS, unconditional offers have also been distributed to students to relieve exam period stress, particularly for those with mental health issues. These offers are also used to attract students, since universities and colleges have begun to form “a competitive marketplace”.

In response to the new statistics, Helen Thorne, UCAS director of external relations, emphasised that students should “carefully” consider all options before accepting an unconditional offer, since universities often require students to accept such offers as their firm choice.

She said: “While unconditional offers are made for a number of reasons, we believe that universities should always emphasise to students the importance of completing their studies to the best of their abilities.

“This will help make sure they’re well-prepared for their degree course, and for future employment,” she added, and announced that UCAS will be publishing a “detailed analysis” on the impact that offer-making has on “students’ attainment”.

A report made in 2016 by UCAS warned that unconditional offers were a contributing factor to the decrease in number of “the brightest students” achieving their predicted A-levels grades, since “applicants holding unconditional firm choices were more likely to miss their predicted attainment by two or more grades”.

Policymakers explained that the increase was likely to have been caused by the removal of restrictions on the maximum number of students that universities can recruit, and the increase of tuitions fees to up to £9,000 a year, incentivising universities to admit more students.

They accused universities for acting “like businesses” – by seeking to maximise their revenue and causing “fierce competition” – after these changes by the government.

Sam Gyimah, Minister for Universities, Science, Research & Innovation, responded to the statistics found by UCAS: “The rise in unconditional offers is completely irresponsible to students, and universities must start taking a lead, by limiting the number they offer.

“Unconditional offers risk distracting students from the final year of their schooling, and swaying their decisions does them a disservice – universities must act in the interest of students, not in filling spaces.

“Places at universities should only be offered to those who will benefit from them, and giving out unconditional offers just to put ‘bums on seats’ undermines the credibility of the university system.”

He stated that he will be working alongside the Office for Students, and expects the watchdog to “take appropriate action”. Other university-related institutions and watchdogs have also expressed their concern.

General secretary of the University and College Union (UCU), Sally Hunt, said: “The proliferation of unconditional offers is detrimental to the interests of students and it is time the UK joined the rest of the world in basing university offers on actual achievements instead of on guesswork.

“Unconditional offers can also encourage talented students to take their foot off the gas, instead of striving for excellence,” she added. The UCU also said that the offers “made a mockery of exams” and pressurised students to “make snap decisions about their future”.

“It can lead to students making less effort in their A-levels because their place is assured. That can then hamper their job prospects later down the line if potential employers take into account their A-level grades.”

“We urge universities to desist from making unconditional offers as an inducement and we urge students to make their choice on the basis of the course which best suits their needs,” he said.

Chief Executive of Universities UK, Alistair Jarvis, specified that unconditional offers account for a “small proportion” of all offers. When used “appropriately”, the offers can assist students, and allow universities to “flexibly” choose applicants.

He said: “Universities UK will continue to work with UCAS to monitor trends and any impact unconditional offer-making might have on student attainment. It is simply not in the interests of universities to take students without the potential to succeed.”

He added that new “post-qualification admissions” have to be outlined, and “putting excessive focus on exam results rather than candidates’ all-round potential” should be avoided.

Universities have also emphasised the benefits of unconditional offers. Professor Graham Galbraith, vice-chancellor of the University of Portsmouth, stated the university’s unconditional offers were carefully designed for earlier engagement with students.

He said: “When mental health problems among the young are on the rise – as well as a substantial rise in ‘perfectionism’, the combination of excessively high personal standards and overly harsh self-criticism – we believe that the sense of security an unconditional offer provides can be extremely important.”

Universities do not provide data on how students with unconditional offers perform, or relevant drop out rates. They defended the practice of distributing unconditional offers, since they rely on tuition fees for funds, and thus have to fill up their courses and “lure in” students.

The Times reported that unconditional offers allowed pupils to “ease up” on work, or “stop attending class” when they “should be stepping up”. Students ultimately “arrive underprepared” for university courses and are “lumbered with weaker A-level results for life”.

Sir Peter Lampl, founder of the Sutton Trust, which aims to combat educational inequality, suggested moving to “post-exam applications”, which would benefit disadvantaged students whose predicted grades were “the least reliable”.

He said: “Having actual grades on application empowers the student. They can pick the right course at the right university with a high degree of certainty they are making the right choice.” 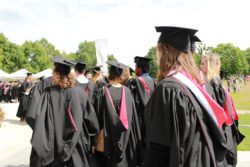