The Boar’s Mental Health Survey: 1 in 4 unable to get a counselling appointment

As part of our Student Focus on mental health, the Boar conducted a survey to investigate Warwick students’ experiences with the mental health services at the University.

Of the 389 respondents, 93.03% said they had suffered from a mental health issue.

Whilst the most common responses were depression and anxiety – two of the more well-publicised and understood mental health conditions – with over 75% students saying they had suffered from these, a wide range of other illnesses were also reported.

27.6% of respondents also said they had self-harmed, whilst 39.8% have suffered from suicidal thoughts.

This follows a recent story reporting that 12 ambulances had attended Warwick’s campus for suicide or attempted suicide over the last three academic years. 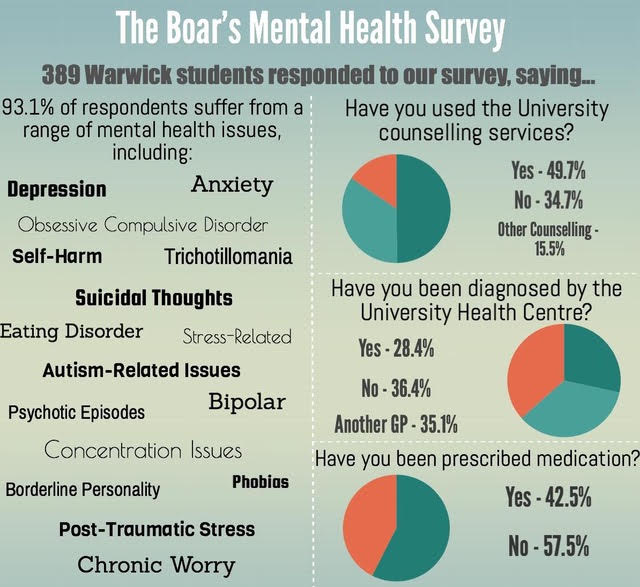 The survey also raised the issue of self-diagnosis, with many people not feeling comfortable enough to discuss their mental health with the GP. Over a third of respondents, at 36.4%, had not been officially diagnosed.

Lack of being taking seriously or dismissed by the GP were listed as just some of the reasons for the University Health Centre being rated a 3 or below out of 5 by almost three quarters of respondents, 74.7%.

Comments left were extremely mixed, though, with some reporting good experiences, despite a majority particularly complaining about the difficulty in getting an appointment.

Of course, the Health Centre does not come under the University itself, but rather the NHS, highlighting an on-going epidemic with mental health treatment in the UK.

Only 55% of mental health trusts have reported increases to their budgets since 2012, with mental health receiving just 13% of the NHS’s budget despite accounting for 28% of the burden of disease.

Only 55% of mental health trusts have reported increases to their budgets since 2012, with mental health receiving just 13% of the NHS’s budget despite accounting for 28% of the burden of disease.

When it came to the University Counselling Services, almost half of respondents had used the services, at 49.7%. However, over a quarter were unable to get an appointment due to demand.

The University spends just £11.92 per student per year on their counselling service, the lowest spend in the Russell Group.

A further 10% of students were also denied an extension or mitigating circumstances on the grounds of mental health, despite having requested one.

Experiences with the University and its treatment of mental health seems to range from department to department, with some citing the academics in their particular subject to have been very helpful and understanding, whilst others were not.

Many also cited long wait times or difficulty being seen by the University mental health services were a big problem, regardless of the inconsistent support of personal tutors across the University.

The University commented: “Over the last year Wellbeing Support Services has been involved with over 4000 engagements through services such as drop-in sessions, workshops, email support, 24/7 website resources as well as face-to-face appointments. 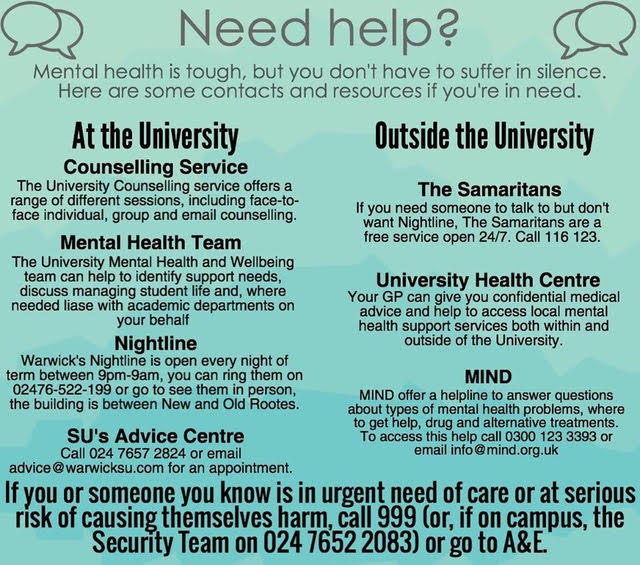