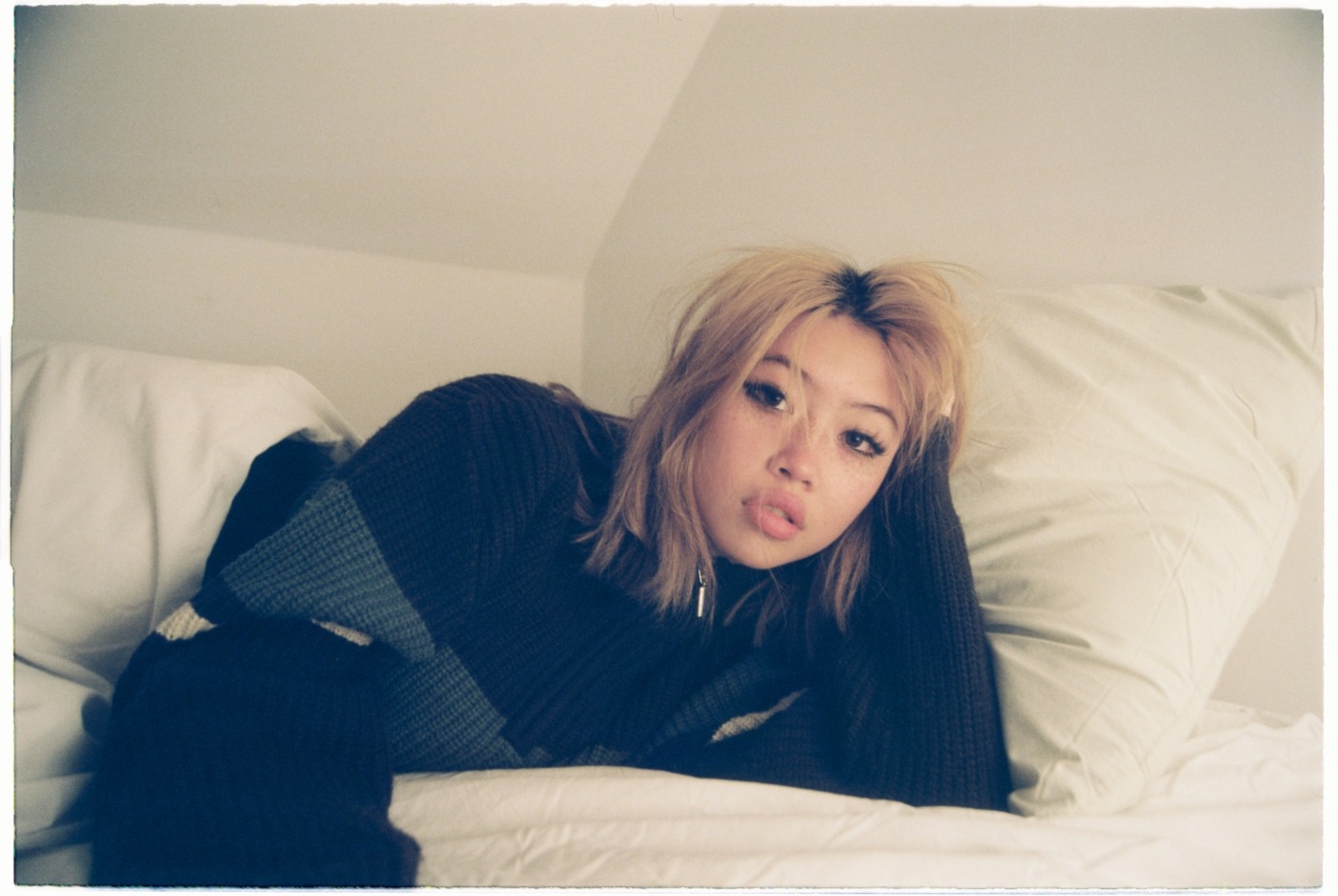 We all have our small lockdown achievements: downloading (and subsequently deleting) Duolingo; perfecting our banana bread recipes; getting through all of Netflix’s rom-com offerings. Beatrice Laus – the love child of Tik Tok virality and lo-fi, otherwise known by her monicker beabadoobee – may have trumped us on the 2020 bucket list front, however.

Her debut album Fake It Flowers takes lockdown projects to a new extreme. Following the likes of Charli XCX and Taylor Swift, the 20-year-old Londoner joins a respected group of artists who recorded and released records in one of this century’s most defining moments, and although it wasn’t written over lockdown – instead composed in the parallel universe of September 2019)- Fake It Flowers premeditated our current yearning for a halcyon past. With Bea, we’re rewinding to the nineties.

“This is the time I’m most excited and inspired about,” Bea told me. “It’s the music I connect with the most and the artists and records that have hit me the hardest. I enjoy that whole aesthetic, the films, the style, the icons it’s brought to us.”

While Bea was looking to the legends of the past, she was slowly yet surely becoming an influence for Gen Z. Beatrice Laus may have been born in the Philippines, but beabadoobee was made on social media. She released her first singles, the original song ‘Coffee’ and a cover of Yeah Yeah Yeah’s Karen O’s ‘The Moon Song’, to YouTube in 2017; Canadian rapper Powfu later remixed the former track to make the TikTok sensation ‘Death Bed (Coffee for Your Head)’.

On Fake It Flowers, however, alt-rock and grunge influences mark an assured move away from Bea’s bedroom-pop beginnings:

“I knew I wanted to do something else in a new lane. I always wanted to take the music to an exciting live show and have a band – my biggest influences are girls who rock like Lush and Veruca Salt. I want that experience for people who come to my shows and hear my music.”

The album is paving a new path in the alt-rock scene as much as it is an ode to the pioneers who came before it. Bea lists Dinosaur Jr, Sonic Youth, The Smashing Pumpkins and Stephen Malkmus (who she already expressed her admiration for on 2019’s EP Space Cadet) as the album’s main influences.

“All of these massively inspired me in making Fake It Flowers, both sonically and in certain ways that I would incorporate into my lyric writing: being quick-loose with it but speaking from personal experience, and also not having to be too serious and being playful with what I say.”

Tracks like ‘Charlie Brown’ and ‘Care’ take this even further, with unbridled rage evinced through Bea’s screamo experimentation – a style she’s open to playing around more with in the future.

“I’m definitely experimenting more and more and probably will continue doing that, not taking to heavy stuff completely but in some places I will. I’ll be coming with surprises very soon!”

The record also follows the spill-your-heart sentiment of many 90s rock classics. On aching cut ‘Emo Song’, the lyrics read something like your secondary school diary – “You call me up and lie again” she croons, “Like all the men I used to trust”. The rest of Fake It Flowers follows a similar, intimate vein:

“They’re all personal stories and things I wanted to say to someone but couldn’t. That was my main theme of the album. In some cases, it was a story of a close friend and again something they wanted to say but couldn’t, and I say it for me or for them in song.”

Some of the music videos shot for Fake It Flowers are imbued with intimacy, too – like we’re following Bea around in her day-to-day life. Take ‘How Was Your Day’, for instance: grainy shots of Bea on swings, smoking with friends and walking around city streets combine to create a retro film, like one of your parent’s old VR tapes, gathering dust on your living-room shelf.

It’s when Bea puts the lo-fi effects aside, however, that she truly shines. ‘Together’ sees her blonde-dyed hair in a spiky updo, baring her teeth at the lense as she sings of “letting you go”; the frenzied energy of ‘Worth It’ matches perfectly with Bea’s chaotic upturning of a cheap motel room; the heartbreak anthem ‘Sorry’ sees her stumble through slate-coloured tunnels – a filming process which was a personal highlight for her, too.

“‘Sorry’ might be my favourite as it was so emotional and we shot it at blue light at about 4 am. When the bedroom boys [directors] showed me it I was so impressed with the whole result. It’s my favourite video, for sure.”

She’s not always stuck in the time-warp, however. Bea names Leo Bhanji, The Notwist and Giant Drag as some of her favourite up-and-coming artists, and she’s supported popular musicians both side of the pond – joining The 1975 on their ‘Music For Cars’ tour and opening dates with American singer-songwriter Clairo.

But where will she go next? With the Brit Awards Rising Star Award and NME’s Radar Award already under her belt this year, Bea is set to embark on a tour in spring 2021, returning to Birmingham. How will she spend her time in the nation’s second biggest city? A trip to the Bull Ring? Getting lost in the world’s biggest Primark?

And if world domination grows dull for the star, she has a backup plan:

“100% to become a nursery teacher for kids,”, she tells me of her career plans beyond music. “I still plan on doing that one day.”

Fake It Flowers is available via Dirty Hit Records and on all streaming platforms.

You can get tickets to beabadoobee’s 2021 tour here.