Should we be profiting from dark tourism?

When you think of going away on holiday, you probably think of sunny beaches, exotic locations, fun away from home – the kind of places that inspire that famous ‘wish you were here’ sentiment. But every year, millions of tourists around the world travel to some of the unhappiest places on Earth – sites of atrocities, accidents, natural disasters or infamous deaths.[1] This phenomenon, known as dark tourism, sees visitors make the worst parts of history a piece of their travel – but should we be doing it at all? Is there not something incredibly macabre about this form of travel?

“It’s the commercialisation of death…”

As Phillip Stone, executive director of the Institute for Dark Tourism Research at the University of Central Lancashire, explains, dark tourism is any travel associated with death, disaster or the macabre. He said: “It’s the commercialisation of death. Take the Flight 93 crash site. Soon after it happened farmers were selling tours of the field. But now there’s an established memorial. There’s been a process of commercialisation from that initial demand to becoming a formal destination.” Some of the more famous examples are the Auschwitz-Birkenau death camp, the killing fields of Cambodia and the 9/11 memorial in New York, while other dark tourism sites include museum exhibitions, cemeteries and shrines.

To a certain extent, dark tourism has always existed.[2] There’s a reason people went to gladiator battles at the Colosseum, for example. In the 16th century, people would come to watch public hangings in London and pay to sit in grandstands, while tourists actually sat in carriages in 1815 to watch the Battle of Waterloo as it unfolded. If you’d like to know more about the history associated with dark tourism places, check out the excellent Netflix show Dark Tourist, which explores the phenomenon.

But now, we think about this practice in terms of a place’s history – how do we reflect and remember the things that have happened? It’s a chance to immerse ourselves in unpleasant experiences of the past, in some cases literally. The bunker museum at Rennsteighoehe offers a “reality experience” where visitors can spend 16 hours dressed as a being treated like a former DDR soldier, for example. Dark tourism is, then, an emotional experience as much as it is an educational one – it may not be a particularly happy leisure experience, but many people enjoy the educational aspect that comes with it.

most history is dark, and the most meaningful dark tourism sites can help visitors both understand the past and be more thoughtful about the future.

I’ve written before about some of the ethical issues raised with dark tourism after the success of Chernobyl led to a surge of travellers to the power plant. Some of the tourists behaved inappropriately, with influencers posing in the rubble of houses wearing gas masks – similar behaviour occurred at the Auschwitz Museum after visitors started taking selfies on the railway tracks which took Jews to their deaths. Some of the marketing tactics were also quite sketchy – Chernobyl hosted its first rave, and the site was surrounded by stalls flogging novelty radioactive products. It’s hardly a respectful way to mark the history of the site. There are also issues with time – just days after the Grenfell Tower fire in 2017, people flocked there to take selfies.[5]

For Mark Watson, executive director of the ethical travel campaign group Tourism Concern, the question of whether dark tourism is right or wrong is not a clear-cut one.[6] He notes: “People go for a huge variety of reasons, so it’s very difficult to assess their motivations. At places like Auschwitz and the Rwandan Genocide Memorial, people go to really understand what happened and are genuinely moved by it. You’ve got to look at the impact on the communities and understand the local sensitivities. It shouldn’t be a case of blundering in and taking some photos.”

I’m a man whose tourism tastes tend towards the dark – I’ve visited museums full of shrunken heads and mummified bodies, torture chambers, the Parisian catacombs, a church in the Czech Republic made of human bones. For me, this is a more engaging and interesting form of travel – most history is dark, and the most meaningful dark tourism sites can help visitors both understand the past and be more thoughtful about the future. As Dr Stone is keen to stress: “Dark tourism doesn’t need dark tourists. It just needs people who are interested in learning about this life and this world.”[7] 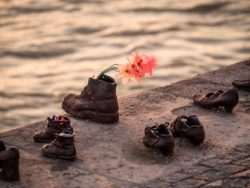 The bright side of ‘dark tourism’