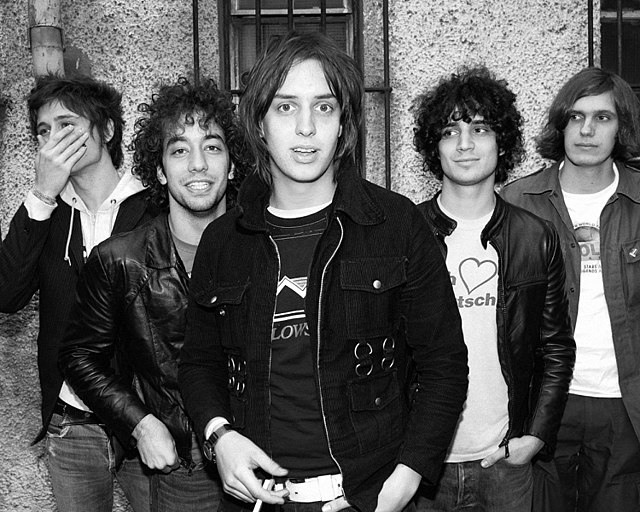 After RCA won the bidding war that followed The Strokes capturing the UK’s attention with their debut EP The Modern Age, countless publications were desperate to deem them the saviours of rock and roll before their first LP Is This It had even been released. The band hated it. They wanted people to listen to the music themselves, form their own opinions. They wanted to be judged based on their own sound and talent, not the sensationalised image of them the media had created. Who was really right in this conflict of interest is left ambiguous, as all the bands I love – Arctic Monkeys, Interpol, The Libertines, Franz Ferdinand and The Killers – owe their starts to the road paved for them by Is This It and, twenty years later, the album is still revered and we listen to it saying, “Oh, that was good music they made.”

The problem Is This It faces twenty years on is that it has far outlived the movement it began. Its garage rock sound was better received than its predecessor The Velvet Underground but was ultimately left behind by mainstream rock after the mid-noughties. Meanwhile the post-punk revival is no longer synonymous with the bands that came out of the New York rock scene, but has instead dissipated so vastly that its echoes in current rock can be understood as the same musical ideas informing contemporary indie. We can observe today’s alternative and underground music as post-post-punk, never to exist in as distilled a form as Is This It.

For that reason, it is an album that either you get or you don’t, and a certain generation at a certain point in history got it. Now, despite the immensity of the record’s impact, it is hard to communicate these ideas without using words that mean nothing to someone who doesn’t ‘get it’ – “cohesion”, “daring”, “hypnotic”, “raw”. There is little use in 2021 attempting to convince someone who adores Whatever People Say I Am, That’s What I’m Not that it wouldn’t exist without Is This It because that is meaningless. It does exist and has become a monument in the musical canon in its own right. Influence, clearly, is not a good indicator of relevance or longevity.

What is clear, instead, is that the band were right in 2001, not the critics

What is worth remembering about Is This It to the casual modern listener is how the combination of its rough, lo-fi production, Julian Casablancas’s laid-back croon and angst-fuelled growls, and the infectious energy of its driving dual guitars creates an experience that is equally suited to a packed live setting as it is to being played in complete isolation. Tracks like ‘Soma’ and ‘Hard To Explain’ – two of the band’s greatest songs – can inspire as much careless, rebellious teen spirit at a gig as they can through earphones.

Is This It opens the record by immediately establishing all the rock and roll swagger and existential brooding that is to come. While Interpol perfected the palette cleanser with ‘Untitled’, never before or since has a rock band created an opener that encapsulates a whole album experience in just two and a half minutes. There is little more or less to adore on the rest of the record, and that’s a good thing. Is This It is nothing if not consistent. From start to finish, the record offers a series of bangers that can be revisited time and time again. However, it’s at its best when one listens to it in the same mood from which it was created: disillusionment and angst. The intentionally gritty and retro sound evokes a certain nostalgic quality in ‘Hard To Explain’ as much as it does in ‘Someday’ and the title track even on first listen. These are songs that entice listeners to bang their heads in enjoyment as much as hang their heads in introspection. The specificity of the stories that lie hidden behind Casablancas’s lyrics on ‘The Modern Age’ and ‘Barely Legal’ is what makes those tracks so relatable in a broad sense; any young people who have waded through drunken crowds at house parties or snuck around in relationships will understand what the band is capturing on these songs.

Ultimately, all that can be said about one of the most widely and enthusiastically discussed rock records of all time is that its position in the canon should be reaffirmed, though not through an exhausting investigation into its influence or a futile attempt to further deconstruct its musical and lyrical genius. What is clear, instead, is that the band was right in 2001, not the critics. The music they made matters more to the modern listener than whether or not rock and roll is dead, or if The Strokes revived it with Is This It twenty years ago any more than they did with their Grammy-winning The New Abnormal (2020). In other words, for fans of rock music, Is This It is an essential album.