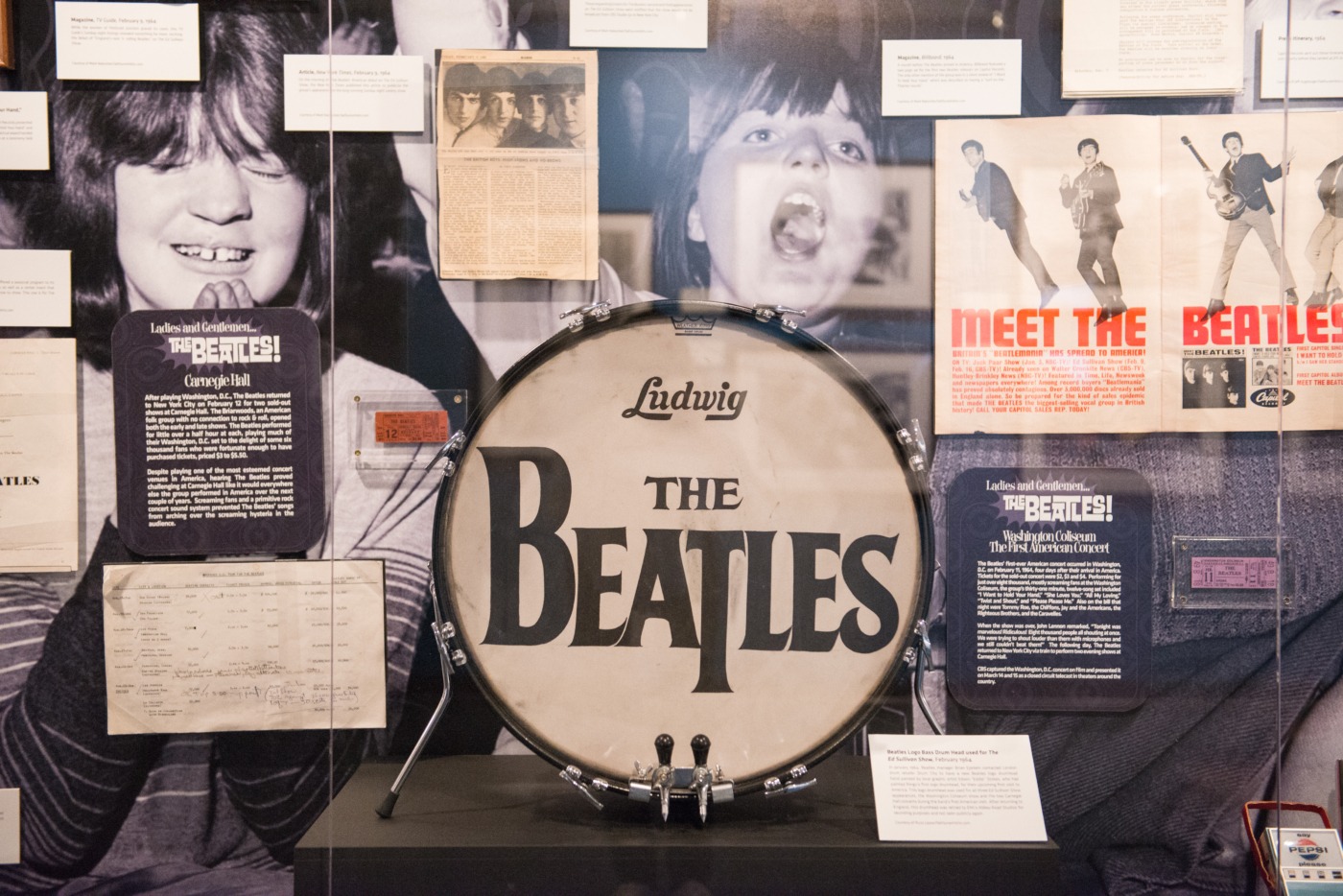 "Ladies and Gentlemen...The Beatles!", a traveling exhibit curated by the GRAMMY Museum® and Fab Four Exhibits, is open at the LBJ Presidential Library from June 13, 2015 through January 10, 2016. More than 400 pieces of memorabilia, records, rare photographs, tour artifacts, video, and instruments are on display, including John Lennon's missing Gibson J-160E guitar. The guitar is on display for two weeks only, from June 13 until June 29, 2015. Photo by Lauren Gerson.

2021 marks the 55th anniversary of arguably the most remarkable record in pop history. By 1966, The Beatles were pushing themselves to the limits of their musicianship. Having burst onto the scene as a pop sensation, producing some of the catchiest and refreshing music of the early 60s (tracks like ‘She Loves You’ and ‘I Want To Hold Your Hand’ are prime examples), the band grew tired of their pop songwriting mastery. Albums like Rubber Soul reinforce this, with songs like ‘Michelle’ and ‘Girl’ indicative of The Beatles mocking their proficiency of such numbers.

‘Paperback Writer’ backed by ‘Rain’, the first tracks released by the Fab Four in 1966, were the work of a maturing band. The A-side: an unemployed man’s desire to be a writer; the B-side: an exhibition of sonic, psychedelic experimentation. The themes and sonic landscapes found in this single would characterise their album that year. With songs like The Byrds’ ‘Eight Miles High’ and albums like the progressive pop masterpiece in The Beach Boys’ Pet Sounds, psychedelia was gaining legitimacy musically, providing the perfect platform for a supremely talented band, with excellent producers and engineers, to create an LP that would change pop music irreversibly. Revolver is that LP.

Revolver marries everything that makes The Beatles amazing. This project displays some of the hardest sounding guitar passages the foursome ever recorded, which become apparent in records like the White Album or Abbey Road. For instance, the jarring riff that underpins ‘She Said She Said’ is delightful in its unashamed presence on the mix. Also, Paul McCartney’s guitar solo on the opener, ‘Taxman’, nicely compliments the frustration and indignation in George Harrison’s sentiment and vocals; meanwhile, Harrison’s riff on ‘I Want To Tell You’ is packed with much nonchalant confidence. The poppiness that coated the band’s earlier works are evident here too: catchy hooks characterise songs like ‘And Your Bird Can Sing’, and lush harmonies appear on ‘Good Day Sunshine’ and ‘Doctor Robert’ in its charming Liverpudlian cadence.

The quality of the tracklist is consistently high. Although there’s no obvious single, it’s more a reflection of the strong individual songwriting being accompanied by superb sonic consistency. ‘Eleanor Rigby’ is a brilliant McCartney track that, like ‘Paperback Writer’, focuses on the plight of individuals – George Martin’s rampant string arrangements successfully adds to the pathos found in the lyrics and vocal melodies. Harrison’s raga rock number ‘Love You To’ is wonderfully hypnotic and its psychedelia is unobtrusive, contrasting nicely with most of the tracklist. Ringo Starr’s ‘Yellow Submarine’ is endearingly juvenile, and a song which plays to his limited vocal strengths.

George Martin and Geoff Emerick as producer and engineer deserve special praise. The production is pristine, and the psychedelic edge in these songs are very tasteful. Their work on tracks like ‘I’m Only Sleeping’ makes an ordinary song in concept and structure part of an inspiring set of opening tracks; effects such as double-tracked vocals, reverse guitar solos, and bursts of drowning vocal arrangements prove sublime. The closer, and the album’s best song, in ‘Tomorrow Never Knows’ truly exemplifies both the producers and the foursome’s glory. The first track to be recorded for the album is an extraordinary achievement in musical engineering. For a song composed of mainly abstract sounds and a vocal performance that has no discernable melody, it grooves harder than many psychedelic songs produced ever since. Ringo’s looped drumbeat, the distorted and fragmented guitar solos, and Lennon’s philosophical utterances makes this one of the best psychedelic songs ever conceived.

Revolver is utterly masterful. It’s the transformative result of young, exceptional songwriters throwing caution to the wind, guided by incredibly competent producers. A cleverly sequenced album: no one voice is heard in succession – playing into the LP’s title. An exhibition of a band pulling together, not marred by conflicting artistic visions that plagued their subsequent albums, nor dealing with a songwriting talent deficit found in their earlier projects.

Though Revolver arguably didn’t perfect psychedelia, it demonstrated how the genre can be truly artful.  Influencing contemporaries like The Byrds and The Jimi Hendrix Experience shown in Younger Than Yesterday and Are You Experienced respectively, and paving the way for the success of current artists like Tame Impala, ASAP Rocky, and Travis Scott for instance. It foresaw the pivotal role the producer has in creating a stellar album currently, as without Martin and Emerick this album wouldn’t have been such a revelation. Revolver is The Beatles at their most creatively ambitious and competent – a band hitting their peak.