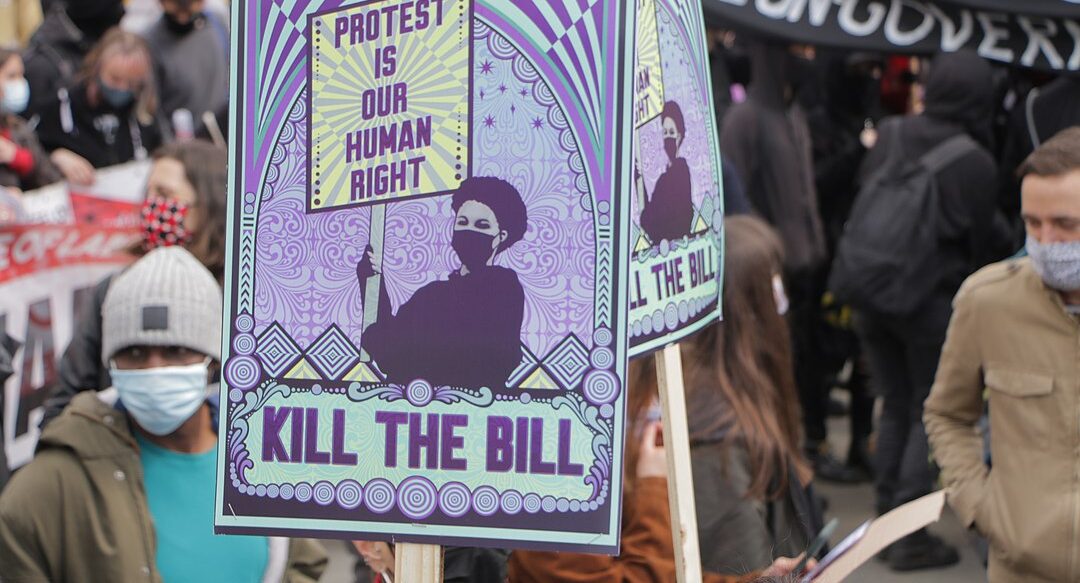 Above the drooping Patient’s Health

Or their own skill: The greatest part,

Study’d, instead of Rules of Art” – Bernard Mandeville, ‘The Grumbling Hive’ in The Fable of the Bees

A few months back, the protest question was everywhere thanks to the Sarah Everard protests and the Policing Bill, which occurred as lockdown was extended again. Back then, the use of the word ‘allow’ with protests was unsettling, as the larger question was not about protests, but of freedom of association and assembly. We have only just begun to see the return of these freedoms, although they may be rather short-lived, as ‘Freedom Day’ was used as cover to announce the eternal suspension of liberty through the use of vaccine passports, which I have previously decried.

I quote Mandeville at the start as he provides the insight at the heart of this last year in particular. A favourite activity of his in his Fable of the Bees was exposing hypocrites as morally bankrupt. My point? My point is some questions to all those who clamoured about civil liberties, freedom, and freedom to protest during the Sarah Everard protests and police crackdown. Where were you in March 2020? Where were you when the original ‘three weeks to flatten the curve’ morphed into months? Where were you when these freedoms were first wrenched away? Where are you now with plans for vaccine passports and a blatantly discriminatory two-tier society steeped in government coercion? It is rather late to awaken now: the horse of freedom has bolted and is happily retired on a ranch – old, decrepit, and with four hooves already in the grave.

We have a government willing to make ‘emergency’ measures permanent, and an opposition thirsty for them to be taken further. Recently, Labour grew a spine and said they’d oppose vaccine passports, then immediately this spine crumbled as they u-turned. For Starmer to call vaccine passports ‘un-British’ one day and then contemplate them the next is peak capitulation. The Liberal Democrats have begun to acknowledge they have ‘liberal’ in their name by standing against vaccine passports, although they have been weak in other areas, such as voting for the inevitably pointless July lockdown extension.

Police have spent the year breaking up house parties, terrorising citizens, and crushing anti-lockdown protests – the latter of which the media dutifully hushed up. Images of pensioners beaten and barrelled into police vans aroused little reaction, if they even made it to public eyes. The 2020 summer of Black Lives Matter protests were mostly unscathed by comparison, but when the Sarah Everard protests were treated like the anti-lockdown ones, some awoke to the horrifying realisation about liberty in the UK and worldwide. The non-response to BLM protests, whether peaceful or violent ones, when compared to anti-lockdown (and now anti-vaccine passport) protests fooled people that we weren’t a police state. The Coronavirus Act used against the Sarah Everard protests was voted for by the same MPs who decried its application against said protestors. At least now her killer has pleaded guilty to his heinous crime.

Interestingly, vaccine passports were decried as a conspiracy theory. The UK and US began to run towards them, then backtracked, and then Johnson announced their implementation on so-called ‘Freedom Day’. The timing couldn’t be more of two fingers to the public if they tried. But a year locked away without the fundamental freedoms we took for granted has made us apathetic. We took the crumbs of ‘freedom’ along the excruciatingly slow roadmap, yet exited the other side to the news of the abolition of liberty, with frighteningly little outcry.

Actions or protests which make the state feel uncomfortable have never really been ‘allowed’. Freedom has always been partially an illusion, a useful one for the maintenance of society, but it has taken on a new ghostly form, fading with every passing day. Protests and actions which truly challenge the state and its power are always the ones that face the greatest resistance. Hence any word against Covid-19 regulations was crushed, any protest beaten down. Look at America for instance, when it comes to protests or movements or opposition leaders there, those which are favoured by those in power are allowed unimpeded, those that aren’t are on the receiving end of the FBI, CIA, and NSA – regardless of constitutionality or ethics.

Banning freedom of association, even on ‘public health’ grounds, allows the state to avoid scrutiny. ‘Public health’ and ‘public security’ can mean whatever the state wants. Just see how the planned changes to the Official Secrets Act were to essentially criminalise journalists who ‘embarrass’ the government. It shows how happy our overlords are to take freedom with one hand and, ostensibly, give with the other. Considering liberty doesn’t come from the state, the lack of outrage regarding their ability to wrench it away for any amount of time is concerning.

Politics is about power and prestige: anyone who enters this world would never relinquish their gains. We love to manage others – this is humanity – and the state is the amalgamation of the worst of mankind parading as our benevolent angel. Banning protests on public health security lines could be used as a reason to ban them or any other form of association whenever the state likes.

Protests are how the truly dispossessed speak, removing them silences all but those blessed with power, whether political, economic, or social

The PATRIOT Act in America (that gave the federal government vast powers to surveil its own citizens), and Blair’s post-1997 governmental and societal revolution (including the Communications Act of 2003 and it’s notorious Section 127) have been monumental travesties to freedom. These revolutions have become entrenched as the new normal. The changes of 2020/21 are the most consequential changes in governance ever, and they have already been entrenched like those of the early 2000s. Restrictions on life, human contact, speech, and protest are here to stay, but it need not have been so. Speech is vital to human existence, protests are how the truly dispossessed speak, hence why removing them silences all but those blessed with power, whether political, economic, or social. Why do you expect the fight to keep protests to go smoothly, if in every other instance liberty loses?

This country needs a reckoning on liberty, freedom of speech, association, and general freedom. We need a reflection of whether we want to live in a soulless managerial state where the public accepts every restriction in fearful lockstep or not. We need to ask what sort of society we want to live in – a free one (one we have never truly had), or one where we need to show our papers to mingle with our fellow humans? Unfortunately, far too many, even a majority at times, want the latter. The managers have been tightening their grip on society for decades, Covid is when people en-masse took note. Although I hate to say it, the state finds real liberty too scary a thing for citizens – its patients – to have, so I don’t see any easy way to climb back up what seems to have been a rather slippery slope.