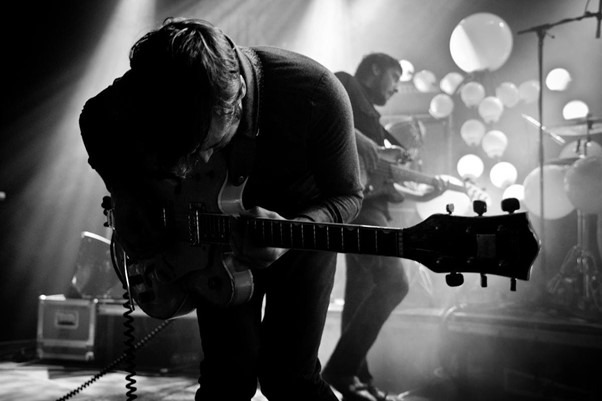 This July marks the tenth anniversary of Portugal. The Man’s major-label debut through Atlantic Records, In the Mountain in the Cloud. Their sixth studio album is an amalgamation of all the influences, experiments, and sounds that the psychedelic indie rock band had indulged in prior.

The project retains the slick production that their previous efforts American Ghetto (2010) and The Satanic Satanist (2009) exhibit, and augments the swinging melodicism and instrumental eclecticism found in their debut and sophomore records. In this LP, the band distil the best aspects of their songwriting into a bolder, polished, accessible package.

Similar to MGMT’s Congratulations, In the Mountain is heavily informed by classic rock: glam rock, 60’s psychedelia, and sunshine pop-esque harmonies are in abundance in this record. The opener, ‘So American’, is a prime example. This single has glam rock of the T-Rex variety written all over it, with the acoustic guitar’s high position on the mix glazing the track, and string arrangements that are tastefully rampant. Despite the song’s cynicism, it reminds me of Mott the Hoople’s ‘All the Young Dudes’ in its references to people in society and its supreme melodies.

The first half of the album is melodically infectious. ‘Floating (Time Isn’t Working My Side)’ has John Gourley exercising his boyish upper register (one of many times on this record), and the vocal arrangements are warm and harmonious. Tasty guitar licks kick off ‘Head is A Flame (Cool with it)’ and the song’s structure is delightful: the verses fall nicely into the pre-choruses with the explosive instrumentation at the chorus taking the listener to pop paradise. The soundscape’s increasing density as the song progresses is a lovely touch too; the lead guitar especially has a nice fiery fuzziness to it.

The band are at their most psychedelic in tracks ‘Everything You See (Kids Count Hallelujahs)’ and ‘You Carried Us (Share with Me the Sun)’. Unlike MGMT, Portugal. The Man deploy psychedelic techniques into songs rather than having their tracks made as though filtered through a kaleidoscope. For instance, there’s some watery tremolo effects on Gourley’s vocals at the pre-chorus of ‘Everything You See’, and tape loops and backward guitar passages are present in ‘You Carried Us’. Although this approach isn’t particularly groundbreaking, the bright brass arrangements found on the former and the solid tune at the core of the latter makes the approach more welcome than trite.

The LP’s crown jewel would be ‘Got It All (This Can’t Be Living Now)’. The lead single impeccably blends the band’s previous sounds and their influences. An intro whose electronics and guitar lick harken back to their earlier projects like It’s Complicated Being A Wizard (2007) and Church Mouth (2007) respectively, lyrics that have shades of Marc Bolan with its allusions to youth and “revolution” (think T-Rex’s ‘Children of the Revolution’), and songcraft which feels born out of the David Bowie school of melodicism circa 1972. It’s a sweet, wonderfully conceived number.

Of course, this record isn’t perfect. Admittedly, In the Mountain may feel a tad one-note because of its melodic consistency. It’s reminiscent of bands like ELO in that regard, which is funny because this LP loses steam by the end much like ELO’s much-celebrated Out of the Blue (1977). Given the rise of ambient music’s popularity, surely there would be no objection to some ambience of the tuneful kind. But there are some songs which feel needless, tracks like ‘All Your Light (Times Like These)’ seem very forced – as if a tune wasn’t sufficiently carved out within the sea of chords, melodies, and passages. Lastly, I personally find the many parentheses in the titles on the tracklist quite jarring. It comes across as very artistically noncommittal.

Despite this, In the Mountain in the Cloud is pure pleasure for the ears. Although I’m not one to care about things in season, this LP definitely suits the summer season in its poppiness and vibrancy. Akin to albums like Weezer’s Blue Album(1994), this record is the perfect antidote for the winter (and spring) blues. I dare say that this is worth a listen if you wish to truly kickstart your summer.

WE RECOMMEND: ‘Got It All’