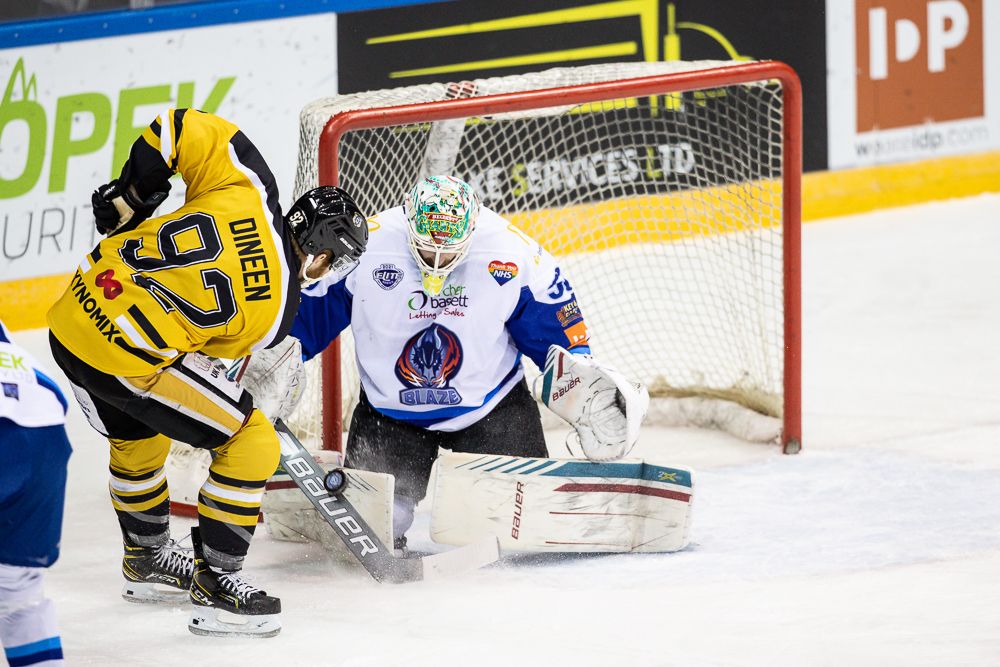 The Coventry Blaze were eliminated from the Elite Series on Wednesday evening, defeated 6-1 on aggregate by the Nottingham Panthers in the semi-final stage.

Danny Stewart’s Blaze entered the second leg with a two-goal deficit, having lost the first leg 2-0 on Tuesday night, and were ultimately unable to turn the tides, losing 4-1 on the night.

Within 25 seconds of puck-drop, Coventry found themselves three goals behind, with Austin Cangelosi opening the scoring for the Panthers.

Nottingham continued to dominate proceedings throughout the opening frame, with only Coventry netminder Shane Owen standing between them and a cricket score.

Coventry scored their first goal of the tie on 13 minutes, with Simen Andre Edvardsen batting the puck into the net after Jackson Whistle spilt a speculative shot from the point by Luke Ferrara.

Within four minutes, hopes of a Blaze comeback were doused. In a carbon copy of the first goal of the night, Kevin Domingue tapped home at the backdoor following a two-on-one opportunity for the Panthers. Brett Perlini will be pleased with his assist on Domingue’s goal, the 30-year-old demonstrated impressive vision to carve out a Grade-A chance for Dominique.

The second frame was similar to the first, with Wallace’s Panthers remaining the dominant side. Cangelosi doubled Nottingham’s lead on the night 12 minutes into the period, assisted by Mark Matheson and Owen Griffiths.

With seven minutes remaining in the final period, Nicolai Bryhnisveen thought he had scored for the Blaze on the powerplay, only for his strike from the high slot to be ruled offside.

A minute later, Cangelosi returned to the ice from the penalty box, drove at Owen’s net, and used smart stickhandling to complete his hat-trick.

Before I discuss Coventry’s performance, allow me to congratulate Tim Wallace and the Nottingham Panthers. This evening’s ‘home’ side were dominant across both legs and are deserved finalists. Wallace’s side have peaked at the right time, they will be dangerous in the final.

On the basis of tonight’s performance, I have vanishingly few positive things to say about the Coventry Blaze – at least in this article.

Had it not been for Shane Owen’s performance between the pipes, Nottingham would have been out of sight within 10 minutes of puck-drop. In that regard, a cursory look at the shot chart tells the story (click here).

Nottingham’s goals came from shots taken within the slot, right next to the goal. The Blaze, on the other hand, rarely created chances of that quality.

In fairness, Simen Andre Edvardsen took his goal well – he had to patient when waiting for the puck to drop below the crossbar before batting it home.

Besides that, it was a sad night to be a Blaze fan. Tristan Keck was uncharacteristically quiet. Janne Laakkonen wasn’t the playmaking force we know he can be. Nicolai Bryhnisveen offered relatively little from the blueline.

In big games, you need your imports to make an impact. They didn’t tonight.

The darkest moment of the game was a second period Coventry powerplay in which the Panthers hit the post and enjoyed a decent amount of zone time.

1st – Austin Cangelosi (NOT) – Fantastic in the face-off circle, dangerous in front of the net, Austin Cangelosi is quite the player. If Nottingham are to win the Elite Series, Cangelosi’s contributions will have been vital. The American’s final goal of the night was fantastic.

2nd – Tim Wallace (NOT) –The Panthers started the tournament terribly, losing four of their opening five games. Tim Wallace’s side have bounced back magnificently, completely shutting down the Blaze in this semi-final match-up. Wallace deserves a lot of credit, the Panthers put on a masterclass against the Blaze.

3rd – Shane Owen (COV) – I felt sorry for Shane Owen this evening. The Canadian netminder made a number of key saves, keeping the game close deep into the second period. Owen’s 0.85 save percentage doesn’t do his performance justice, he did just about everything he could to keep Coventry in with a shout.