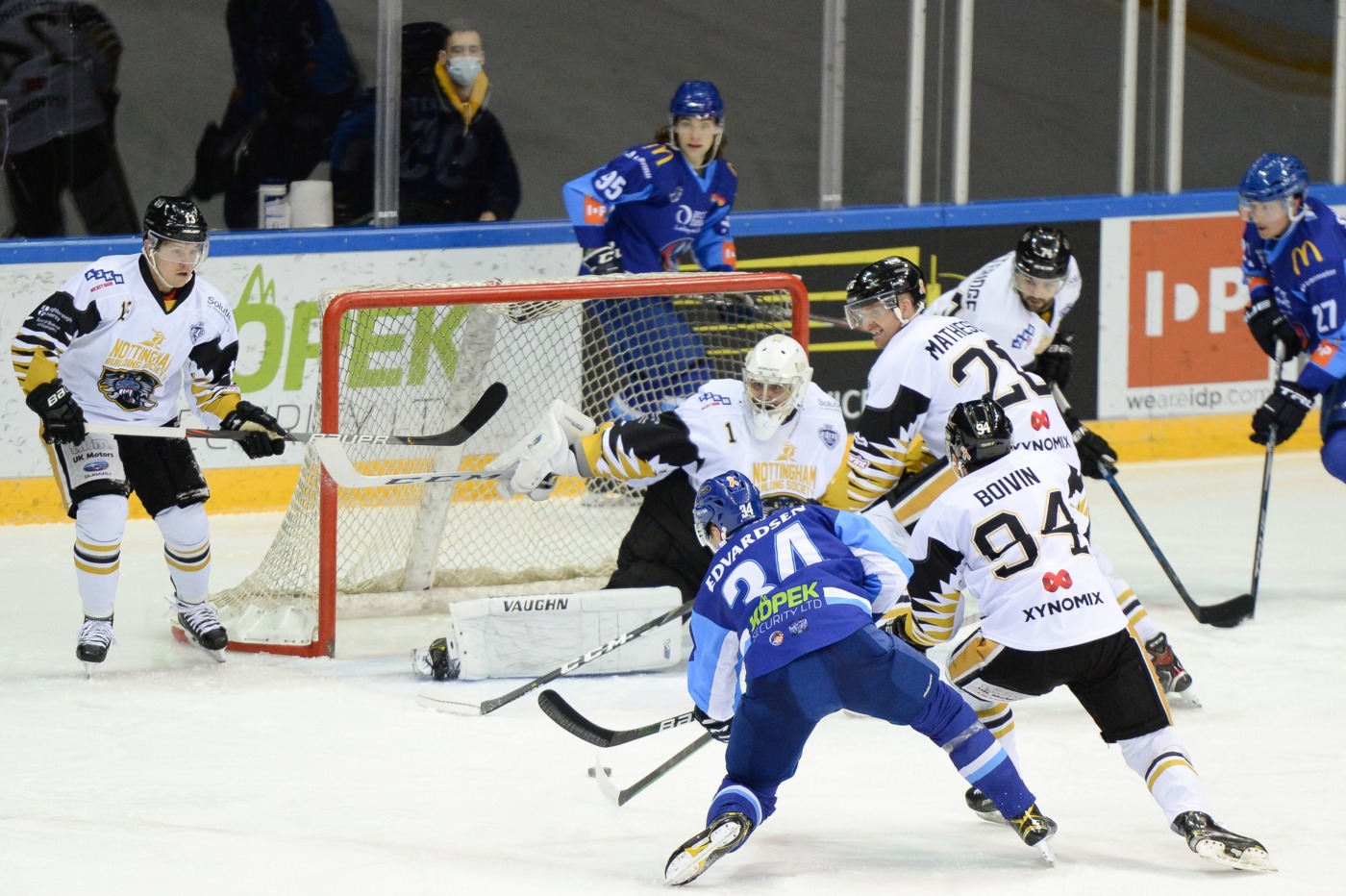 Danny Stewart’s Coventry Blaze fell to a 2-0 defeat at the hands of Tim Wallace’s Nottingham Panthers, in what was a very close affair throughout all three periods of this first leg semi-final.

The Blaze actually had the better start to the game, getting a powerplay in the 6th minute and going very close through Janne Laakkonen a moment later, as he tried a short-side shot that narrowly bounced out and away.

A man who would turn out to be key in the Panthers’ victory was netminder Jackson Whistle, who was given the nod over fellow goalie Ben Bowns today. He saved a good shot from Ferrara early on in this one to set the tone for the rest of the game.

There were two more penalties in the first period, one for each team, and a good chance for both Christophe Boivin and Tristan Keck before the first twenty minutes came to a close with the scores still level.

Chances had been at a premium throughout a cagey opening period, but the Panthers pounced early in the second through their energetic forward line of Boivin, Brett Perlini, and Kevin Domingue, with the former pair assisting the latter as he tucked away a rebound off Shane Owen.

The second period ended with Panthers holding onto a slender lead

Both sides had a few gilt-edged chances to score in this period, with Joshua Tetlow finding himself in acres of space behind the Blaze defence, though he was unable to finish the move off, and Keck expertly spun Brendan Ellis before sitting Mark Garside down, but the latter was able to get just enough on the puck to stop the Blaze forward progressing any further.

The second period ended with Panthers holding onto a slender lead, and Coventry certainly weren’t going down without a fight.

Once again in the final period, there were a number of big chances for both teams. Oliver Betteridge jumped on a loose puck from a faceoff and saw his snap-shot smothered by Shane Owen, whilst at the other end, Keck launched a brilliant shot that bounced back into play off the bar.

Keck had another opportunity on 51 minutes, where he found himself 1-on-1 against Jackson Whistle, but he couldn’t connect with the puck well enough to get a clean shot on goal, and the Panthers netminder easily gathered.

Five minutes later, that miss was punished, as Austin Cangelosi wasn’t tracked by Max Krogdahl, giving him a clear route in behind the defence and an even clearer route to goal, as he put Tim Wallace’s side 2-0 up with four minutes remaining in the tie.

Coventry had a great chance to pull one back within a minute, but Jackson Whistle capped his stunning performance with a stunning save, robbing Luke Ferrara by clawing his goal-bound shot out of the air.

A last minute timeout was called by Danny Stewart in a desperate attempt to pull something from the first leg, but there was nothing they could do, as the game ended 2-0 to the Panthers.

This was a brilliant game from a tactical point of view, even though the action itself was stifled, perhaps by the occasion, perhaps by how close the two teams were on the day, with neither side showing that they were clearly better than the other.

Nottingham made more of their chances when they came, but in reality, there was very little to split the two teams, with Coventry having five more shots and only one more on target than the Panthers, with both teams trading blow for blow.

Both goalies were on form too, though Jackson Whistle was called into action more often than his opposite number. Through his 30 saves and 100% save percentage, Whistle certainly justified his selection over Ben Bowns in the starting lineup today.

Paul Swindelhurst was returning for the Coventry Blaze today, also, and put in a solid performance overall. Although he wasn’t able to contribute as much as he probably would have liked, he didn’t show any signs of fatigue or injury issues in his first game back.

Tristan Keck caused more problems today than he did in the previous meeting between these two, making five shots and putting three on target, as well as stringing together a number of excellent individual moves.

Although the Panthers hold a two-goal lead, Danny Stewart won’t be disheartened going into the next leg. His side showed enough today to prove they can wrestle this tie back. It will be a big ask, however, if Tim Wallace’s team play with as much discipline as they did today in the next clash tomorrow evening.

The second leg follows this game just over 24 hours later, with these two facing off again at 7pm on Wednesday evening, where they will fight once more for a place in the final against Manchester Storm or Sheffield Steelers. 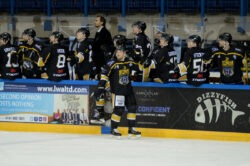