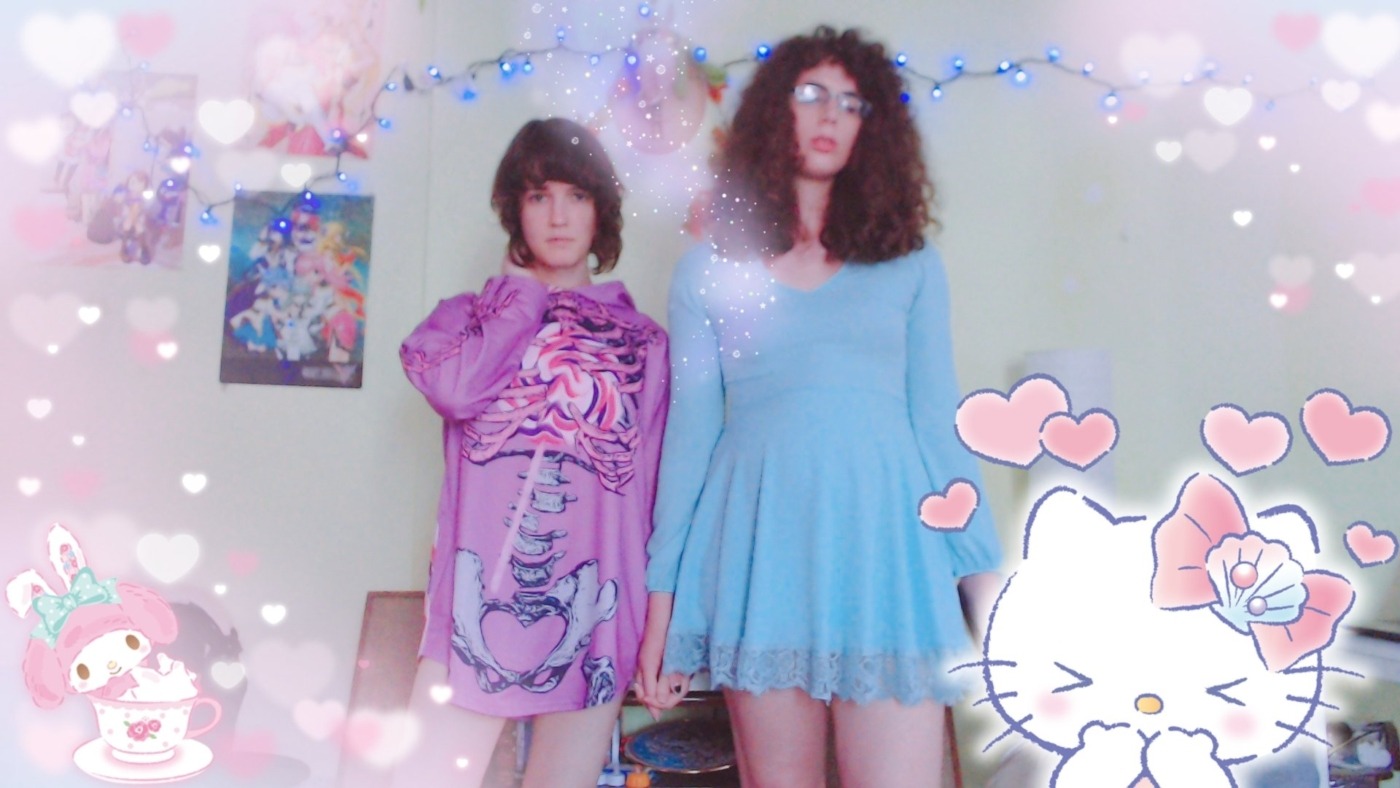 Unapologetic, raw passion. Black Dresses, the Canadian noise-pop duo consisting of Devi McCallion and Ada Rook once again bring an onslaught of glitchy, turbulent sounds, whilst delivering strangely hypnotic pop songs. In spite of comparisons to the likes of Death Grips and MIMIDEATH, Black Dresses blend together elements of harsh noise with pop in a relentlessly unique way.

With a slow, warped intro ‘LEFT ARM OF LIFE’, this robotic voice, accompanied by washy synths, creates a dystopian atmosphere, easing the listener into this peaceful, yet hellish world. What makes this track so brutally amorous is its cute call-and-response relationship between Ada and Devi that is a common tool used throughout. Take ‘DAMAGE SUPPRESSOR’ for example. Drowned out by a furious, bit-crushed instrumental, Devi calls out “Can you be as safe as you can” to which Rook responds, “I know it’s not that easy”. The clear parallels in lyrics and beat perfectly reflect the title. The versatility and willingness to take an idea, play with it and completely demolish it moments later continued to amaze.

One of Peaceful As Hell’s highlights, ‘BEAUTIFUL FRIENDSHIP’ seamlessly transitions from a piano and dainty lyrics to a hard, driving wash of distortion accompanied by hellish screaming. The strong bond between bandmates is a delirious relationship which can change without warning. This is reflected in their clear contrasts in instrumental and lyrical themes throughout the project. I was thoroughly impressed by Black Dresses’ enthusiasm to push their vocal range to the extremes of either screaming or vulnerable murmur; this confidence reinforces the personality of the album. Emotive hooks and poppy refrains nod a head towards 100 gecs, yet delivers a more raw, immersive performance.

‘MAYBE THIS WORLD IS ANOTHER PLANETS HELL’ provides an intriguing narrative about existential trauma and stardom, yet provides a lacklustre instrumental. ‘SCARED 2 DEATH’ uses a combination of fleeting guitar notes as well as crisp, hard rock motifs to create a composition reminiscent of an army drill. Partnered with an incessant hook (“We’re gonna find out what it’s gonna be about”), the levels of explosive frustration dramatically elevate.

Black Dresses’ cohesion is absolutely perfect in this record. This is shown in tracks like ‘EXPRESS YOURSELF’ where the more thoughtful questioning lyrics of Ada contrast Devi’s borderline satanic proclamations, creating a “peaceful hell”. However, we should take a minute to appreciate the genuine attempt at a wholesome message through ‘PLEASE BE NICE’? This slow, driving rock-ish anthem is attempting to eliminate all mean people through heavy metal screams.

Despite the cheeky lyrics in ‘CREEP U’ that sound like they’re being delivered through a smirk, this song plays it safe with dilute guitar riffs and song structure. The unexpected soft synths don’t fit the themes of the song, however the last minute returns back to the Black Dressesquintessential style.

The final track ‘666’ does give a more deconstructed structure that shows some charming song critique, but ultimately, there would’ve been a more cinematic grand finale by ending on ‘CREEP U’. As of writing, Black Dresses have unfortunately split after being faced with a torrent of online harassment. Following the TikTok fame Devi and Ada suddenly received, some fans went out of their way to become extremely invasive in Devi’s personal life, resulting in the removal of their music from major streaming services. This disbandment is a sad example of the influence of the internet and how it can affect livelihoods.

However, it is only right to celebrate this album for what it was intending to be. Black Dresses have delivered an AOTY 2020 candidate and they know it. The sheer cunning and willingness to impress and adapt makes them one of the smartest acts in noise-pop right now. They have continued to develop from relatively shaky projects like ‘Thank You’ into a refined, yet personal, album jam-packed with attitude and aggression.