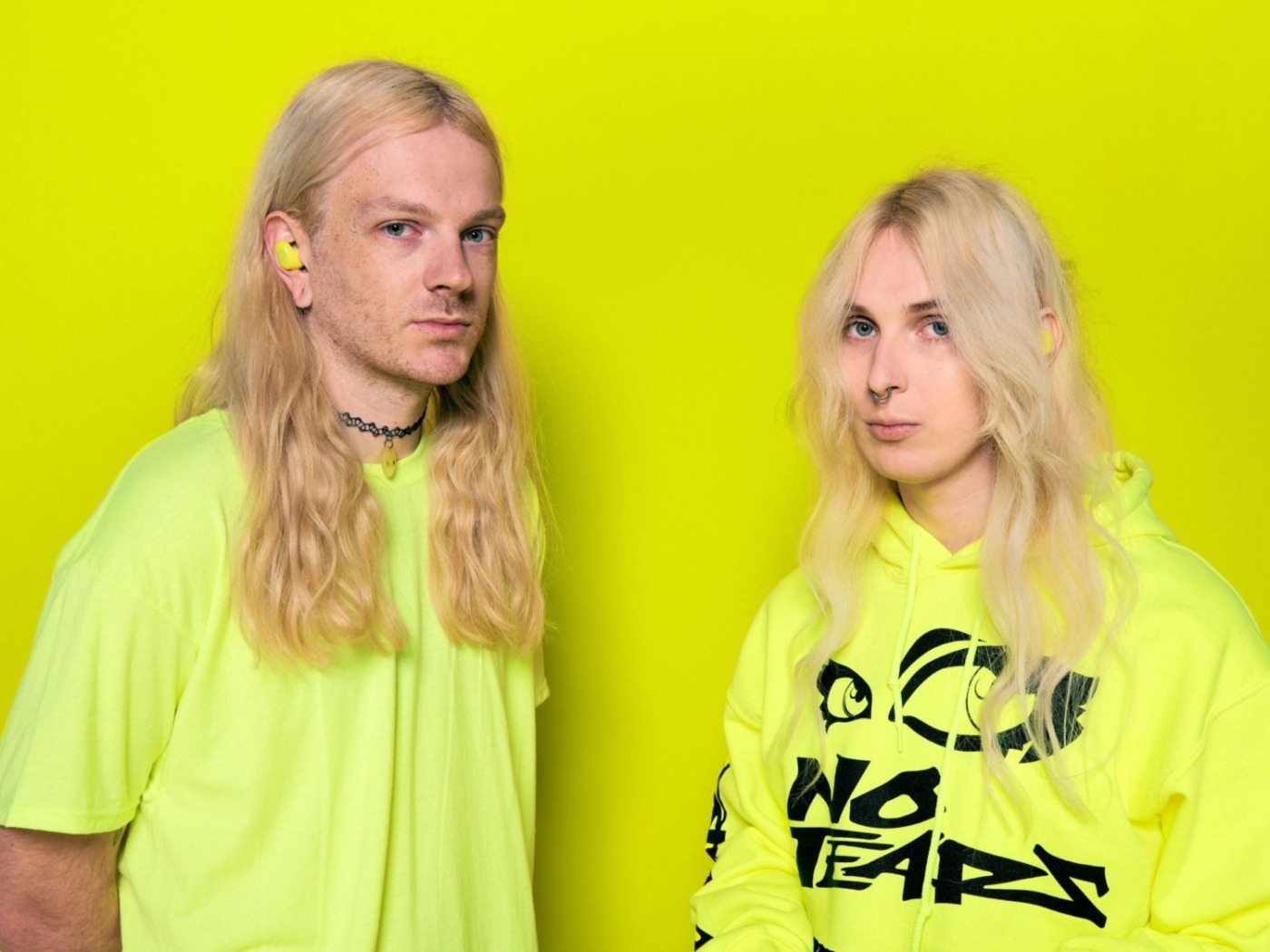 For 51 minutes, Dylan Brady, Laura Les and their band of merry Gecs exhume and defile the corpse of music. You’ve never heard a remix album quite like this. The closest I can get to describing the experience is to say it’s the most pleasurable migraine you’ll ever have. Electro-pop, bubble-gum bass, pop-punk, hardcore punk, hardstyle, Eurobeat, trap and Brostep are thrown in a blender and presented with accoutrements including excessive reverb and distorted harsh noise.

However, as my student kitchen adventures attest, simply throwing random ingredients into the mixing bowl does not a good cake make. This is a brilliant experimental album. There is clearly a recipe here, albeit a twisted, sadistic recipe that creates earworms that worm their way in with all the subtlety of a road drill. If you go into it prejudiced against the ridiculousness of it all, you will get nothing from it: but if you give it a chance, you’ll find yourself wrecking your voice trying to sing glitched-out vocal melodies in the shower for weeks.

If it wasn’t for the better production on Diamond’s syrupy vocals, you could believe that this was a Cascada hit from circa 2006

AG Cook’s remix of ‘money machine’ kicks off proceedings on a low key note, flipping the song’s opening (and shouted) monologue into a whisper, and then spends the rest of the song building towards a climax that is never fully realised. It leads into the much weirder edit of ‘ringtone,’ with the chorus now sung by Charli XCX and a real juxtaposition of guest verses – Sarah Bonito (of Kero Kero Bonito fame) provides an almost soft-spoken verse in her trademark ironic playful innocence. I’ve always found her music a tad unsettling (in a good way) and this is no different. However, it’s immediately purged from your short term memory by a far from innocent verse of debauchery from Rico Nasty. It’s a capricious combo but it somehow feels cohesive.

The proceeding Injury Reserve mix of ‘745 sticky’ is not. Dylan Brady produced ‘Jailbreak the Tesla’, my favourite song from their self titled album, and the beat here is reminiscent of it as Injury Reserve deviate from the source material probably the most of any remix on here. Danny L Harle’s mix of ‘gec 2 Ü’ builds towards a climax of Noise infused hardstyle and gabber. As a central- belt Scotsman, I’m obliged to get turnt anytime I hear hardstyle, like someone activating a Soviet sleeper agent: however, this mix doesn’t really do anything interesting with the formula.

One of the most incomprehensible crossovers of all time follows, as Fall Out Boy put in their best work since Folie A Deux on their remix of ‘hand crushed by a mallet’. Patrick Stump nails the intro, before the second verse is converted into a kind of nightcore mix before a post-hardcore/noise crossover outro that will leave you with many questions – most of them simply being ‘why?’

Next up, Rico Harver drops a filthy Brostep mix of ‘800db cloud’, enjoyment of which is entirely predicated on if you enjoyed the year 2012. GFOTY drops her mix of ‘Stupid Horse’ next in which she doctors the lyrics to fit her salacious persona. Harver’s shtick does veer a little on the wrong side of cringe, although the future house-inspired second half has a great instrumental. On that note, the Umru mix of ‘ringtone’ has possibly the catchiest beat of the album after the first chorus. The album stays in earworm territory on the Tommy Cash and Hannah Diamond mix of the disgustingly titled ‘xXXi_wud_nvrstøp_ÜXXx’. This borrows heavily from Eurodance, and if it was wasn’t for the better production on Diamond’s syrupy vocals, you could believe that this was a Cascada hit from circa 2006.

It makes no sense, it shouldn’t work, but track after track leaves you with a Cheshire cat grin at the sheer absurdity

Don’t get too set on the easy listening though. Noise-pop band Black Dresses blow the speakers with their mix of ‘745 sticky’. I’m a big fan of all their albums (Thank-you is one of the best noise-pop records ever) and whilst the instrumental here is great, it feels like they just added ambient screams all over this in random places. I wouldn’t mind but they sound distractingly bad in this, with neither the viscerality of death metal or metalcore nor the flat and distant effect of Blackgaze. They are deployed with much more jurisprudence on their own records.

Of the remaining mixes, the most memorable is definitely the Dorian Electra version of ‘Gec 2 Ü,’ which begins with a decidedly odd skit about phone sex, which is pretty on-brand considering their critically acclaimed debut record last year drew heavily on their experience as a non-binary person in BDSM relationships. The NOTHANKYOU mix of ‘hand crushed by a mallet’ deserves special mention as well for its incredibly distorted and noisy take on pop-punk that ends up landing it closer to a noise-rock band like Lightning Bolt. The album has some new material and live performances to round it out but these are hit and miss. ‘toothless’ is the obvious highlight and the live performance of ‘800db cloud’ is even more blown-out than the original.

This is a debauched album featuring an all-star cast of almost anyone who has made waves in noisy abrasive postmodern pop, and a few outside admirers like Fall Out Boy and Injury Reserve to boot. Sensory overload is its default setting. It makes no sense, it shouldn’t work, but track after track leaves you with a Cheshire cat grin at the sheer absurdity. And then you catch yourself singing it to yourself later. According to all known laws of music theory, this shouldn’t bang. But it does. I’m already stockpiling aspirin in eager anticipation of their next release. It really is an album that requires you to suspend your disbelief, but if you don’t judge it for what it is, you’ll enjoy 51 minutes of utter chaos and possibly the most fun record to come out this year.

We recommend – ‘hand crushed by a mallet’ (N0thanky0u remix)