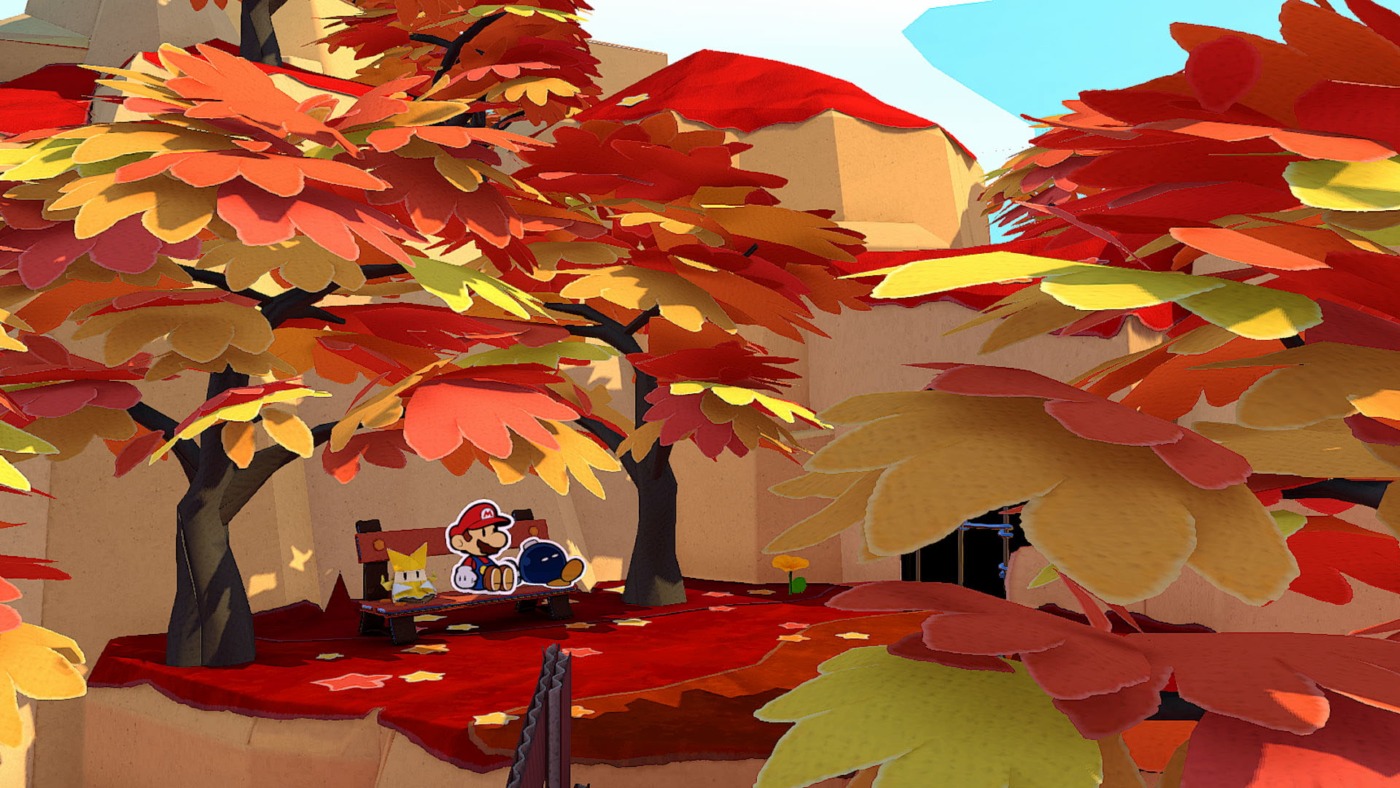 As I explored in my analysis of the Paper Mario series, there have been a lot of highs and lows, and the series has been in a bad way. Many fans, myself included, hoped that The Origami King would be the game that matches (or even surpasses) the quality of The Thousand-Year Door, the series’ best outing – and does it? Well, in a word, no. It’s a fun, funny game and a definite step in the right direction, but it struggles with a battle system which loses its novelty fairly quickly and a disappointing amount of linearity.

The Origami King comes with a unique plot, and it fortunately retains the series’ staple humour. Mario and Luigi are invited to an origami festival at Princess Peach’s castle but, on arrival, the place is deserted. He learns that the castle has fallen under the control of King Olly, the titular Origami King, who wants to transform everyone into origami. He has captured Peach and a lot of the kingdom’s inhabitants already – Mario just about escapes, and must figure out how to liberate the castle from Olly’s paper streamers.

He’s joined on this quest by Olivia, an origami princess and Olly’s sister. She’s one of the series’ better companions, throwing out just the right amount of optimistic comments and advice if you request it. But there’s a lot of humour to be found. One of your missions is finding and freeing the Toads who are scattered around the world, and they generally have funny lines when you do. Every character comes throwing out quips and with a script this funny, I was laughing a lot as I played through. Even minor characters get more development than you’d expect, and the end of one of these storylines genuinely brought a tear to my eye.

Rescuing the Toads does have another function, and that leads us into the battle system – this is a make-or-break aspect of the game and, for me, I’m afraid it was the latter. Battles are essentially a puzzle game of sorts. Mario is positioned in the centre of a turntable, surrounded by four rings – in a limited number of moves, you need to rotate and slide so all the enemies are in a straight line of a 2×2 square. Get it right, you get a boost that essentially enables you to win in one move. If you don’t, you’ll take some damage and have to try again next turn.

Every character comes throwing out quips and with a script this funny, I was laughing a lot as I played through

This was a fun challenge to begin with, but it very quickly lost that thrill. Many of the puzzles are so hard, it’s unrealistic to imagine you’d ever solve them in the time limit. There’s an assist option that gives you some help, which I wound up just keeping on at all times, and you reach a point where you can essentially pay Toads to solve it for you. It doesn’t help that, as you progress, you realise that there’s not really any point to battling. There’s no experience – you earn coins and confetti for winning, but coins are only really used in battles in the first place, and confetti quite literally grows on trees. Battles are a huge part of The Origami King, and I tried to avoid them as often as I could.

That said, the mandatory boss battles play with this system, and I did enjoy those. These situate Mario on the outside of the turntable, and he must navigate tiles with arrows, switches, and other elements to find his way to the boss and do damage. Most of the bosses are sinister craft items, like a roll of tape or a hole punch, and it is really impressive to see such mundane objects imbued with character.

This is true in part because the origami mechanic adds even more character to an already beautiful game world. Sadly, it’s not quite an open-world RPG – you’re essentially progressing in a linear fashion through a series of exquisitely animated environments – but it’s so lavish, it’s hard to mind. The paper aesthetic is really charming, and I loved exploring the world, looking for all the hidden Toads and filling in holes. On a plus note, the game tells you when you’ve found everything in an area – I appreciate that, and I wish more games would do it.

I’ve ragged on the combat system here but, if you can ignore that, everything else is brilliant. The Origami King may not have been exactly the game I was hoping for, but there’s a lot to love, and I did love it. It stands up beautifully, and although it’s a shame that a few of the innovations don’t really land, The Origami King is a witty and vibrant adventure that I’d recommend for Switch fans.