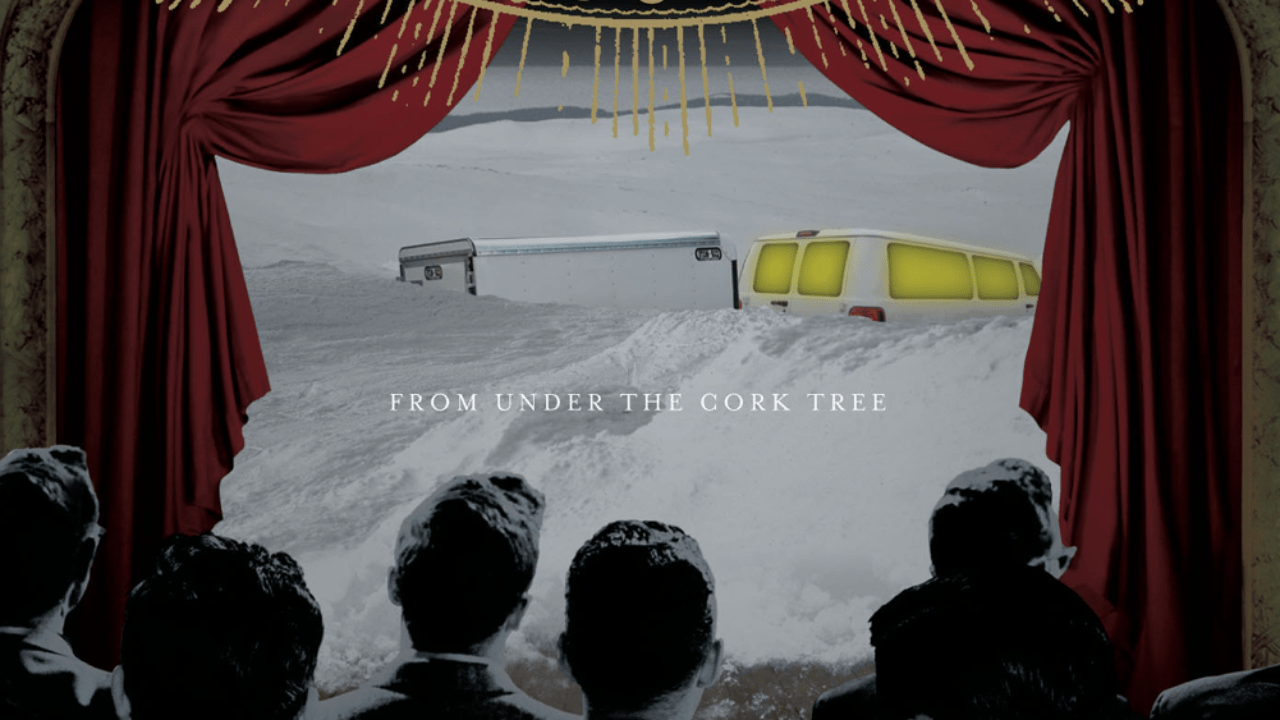 I found Fall Out Boy’s From Under The Cork Tree under, well, an actual tree. The CD was below my Christmas tree when I was sixteen. My mum was buying a CD for my dad from the 2 for £10 section of HMV and asked if there was anything I wanted so she could take advantage of the offer. I chose it on a whim. It turned out to be a very good choice.

I got into Fall Out Boy, as I like to put it, the wrong way round. In the dawn of my emo phase, I discovered their post-hiatus albums before any of their earlier stuff. American Beauty/American Psycho had just come out at the time I began to develop an interest in rock music and I naively thought I was listening to pop-punk.  I enjoyed it, sure, but then I became more interested in listening to Black Veil Brides and Pierce The Veil, so FOB went on the backburner for a while. Listening to From Under The Cork Tree was an attempt to become re-invested in them. Once I heard it, I never left them on the shelf again.

It’s clear why it was this particular album that propelled the band to the levels of arena-filling stardom that they have reached today. Some critics responding to it at the time of its release dismissed it as generic, but really, it is anything but. You would usually think of the pop-punk and emo genres as somewhat far removed – the former thrives on upbeat energy while the later broods on the depths of human emotion. Fall Out Boy made them appear like blood relatives. They proved that the two could exist in harmony rather than at opposite ends of a spectrum.

Pete Wentz’s introspective and frequently wry lyrics brought a new take on the sensibilities of emo and the rich, sonorous vocals of Patrick Stump brought them to life with a tone unusual for, yet perfectly suited to rock. Musically, it has all the energy of pop-punk but with an undertone of drama and a huge shot of ambition for greatness. I like to think I’m pretty well versed in both genres and in spite of that, I haven’t heard anything remotely like this record. It’s part of what makes it so special.

This is not a typical emo record: there’s no overwrought melodrama here

It was on this album that the band nailed the creative process that they have used on every record since: it was by no means a conventional route. Stump would write all of the music while Wentz penned the lyrics. Indeed, he does a pretty masterful job. This is not a typical emo record: there’s no overwrought melodrama here.

He is eloquent and creative always, whatever mood he is in, and there’s quite the emotional range. He pines for a love interest (‘A Little Less Sixteen Candles, A Little More “Touch Me”’), ponders his sense of self-doubt (‘I’ve Got A Dark Alley And A Bad Idea That Says You Should Shut Your Mouth’) and pokes fun at the life of celebrity with tongue firmly in cheek (‘Our Lawyer Made Us Change The Name of This Song So We Wouldn’t Get Sued’). And of course, he had some of the best of the emo staple of long, long song titles, with many guaranteed to raise a smirk – ‘I Slept With Someone In Fall Out Boy And All I Got Was This Stupid Song Written About Me’, anyone?

The world of music is lucky to have an album like From Under The Cork Tree. It’s all the luckier considering that we might have never been able to hear it

There are so many other standouts I haven’t even mentioned. I couldn’t write an article about From Under The Cork Tree without mentioning the classic that is ‘Sugar, We’re Goin Down’. If any song made Fall Out Boy, it was that one – all the more ironic considering their label was unsure about its potential as a lead single. The band pushed for it, they gave in and FOB was suddenly, unexpectedly, everywhere.

Then there’s the jaunty pop-punk leaning ‘Dance, Dance’, the catchiest and most energetic song on the record. Bookending the album is a personal favourite, a moody story of secret romance titled ‘XO’. It’s potentially the most underrated deep cut of Fall Out Boy’s discography.

The world of music is lucky to have an album like From Under The Cork Tree. It’s all the luckier considering that we might have never been able to hear it. The chorus of ‘Sugar, We’re Goin Down’ was almost binned. Pete Wentz attempted suicide while making the album, struggling to cope with the pressure (the title of ‘7 Minutes In Heaven (Atavan Halen)’ references this). Somehow, in spite of this, and of their underground beginnings, they made it. It’s not only the best album of their career but a musical feat of greatness. It is emo gold.

Happy birthday, From Under The Cork Tree. You haven’t aged a day.