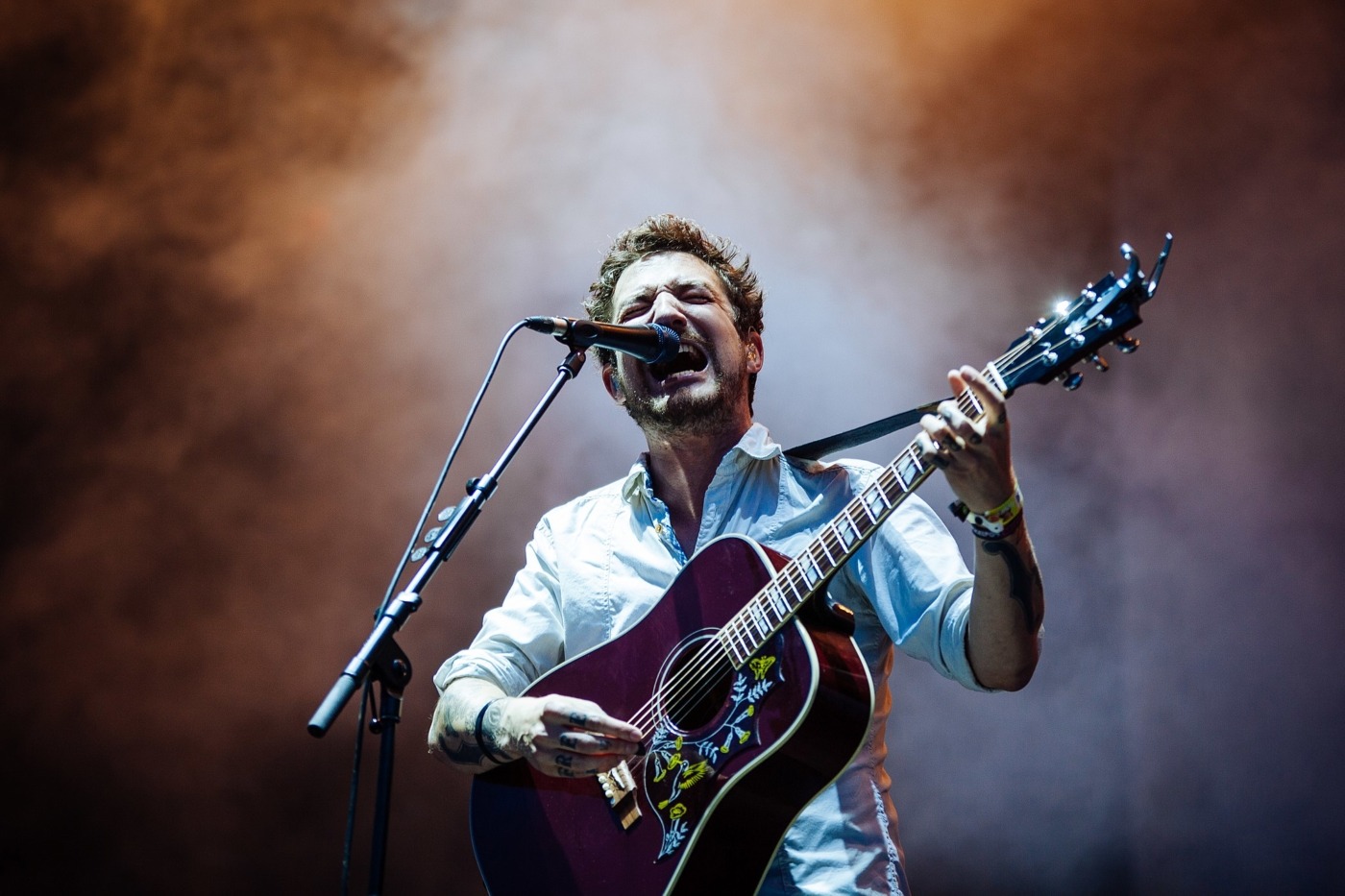 The era of coronavirus is also the era of waiting. Waiting for lockdown to end. Waiting for a vaccine to arrive. Waiting to finally go through with the plans we made that were postponed in the wake of the outbreak.

When it came to his new live album, Frank Turner didn’t want to wait.

“This was [something] we were planning on originally releasing later in the year,” he explains. “Obviously, given current events, I couldn’t really see any reason to wait. The mixes were done and everything was ready to go, so we decided to move it forward.”

When that decision was made, the whole meaning of Live In Lockdown altered significantly. “It’s kind of bittersweet,” Frank remarks.  “It was nice listening to it and going, ‘Oh yes, I remember gigs, gigs were awesome’ and then you kind of remember, ‘We’re not allowed to go to them right now’. It felt like a good thing to get out at a point in time when gigs aren’t happening because it’s a nice reminder of what we’re missing.”

Ironically, Frank admits that he’s “not all that enthused about live recordings”. “I believe that live shows are an ephemeral thing that happens once, and if you were there, that’s great, but if you weren’t, tough luck, you go to the next show.”

However, it appears he makes an exception for his truly special shows. The first of these came about on his 2016 tour documentary Show 2000 which saw the two-thousandth show Frank played in his career immortalised in the form of a DVD, and later in a CD, which was released in December. The three-month tour saw him and his band, the Sleeping Souls, show “a different angle on who we are”.

“This set is about subtlety and nuance. [We wanted people to] pay more attention to the actual musicianship of what we were doing”

What did this “new angle” look like? It was a far cry from their usual “raucous punk rock show”. The band played a set with completely different arrangements to completely different songs from their usual gigs, with a strong narrative arc woven throughout their performance founded on storytelling. Even more significantly, the whole band, along with the audience, were seated for the entirety of the evening.

“It made it much more of a show that was about listening,” says Frank of the decision to keep the audience sitting down. He still insists that punk rock is his “bread and butter”: “People come down to a show to get drunk and mosh and I think that’s cool. But, quite often when you’re doing that, the subtleties and nuances of [the performance] can get lost, and doubly so if what we’re doing on stage is trying to play as high energy as we can. A lot of this set is about subtlety and nuance. [We wanted people to] pay more attention to the actual musicianship of what we were doing.”

The whole environment of the show is not only a deeply intimate affair but also a personal one. Frank’s between-song chat is more earnest and revealing than his usual stage banter as he explores not only the stories behind the songs but also the private matters that went into them. An early portion of the show is devoted to unhappy love, while he also touches on his history of mental health issues and addiction.

He captures life in all its glory and misery

How did it feel for the musician to discuss such personal matters? “Whilst it’s scary and difficult at the beginning,” he admits, “if you push yourself to do it, it’s something that I personally find quite liberating. To be able to stand on a stage in a room full of strangers and talk honestly about addiction or mental health issues and have people react to that with sympathy and empathy is very comforting. It means that you are not alone. It’s something that I feel is beneficial both for me and hopefully for the audience as well.”

Live In Newcastle is indeed remarkable for the honesty, humility and authenticity Frank displays in his stories, but it is by no means gloomy in any way. He introduces some of the issues he talks about, most notably death at one point in the show, with a hint of joviality in his voice, almost laughing at himself for the succession of discussion points that might have been depressing if told by another person.

Ultimately, he captures life in all its glory and misery, exploring the negatives but equally highlighting the positives too. At the time of the show’s recording, he had been married for three months and speaks highly of his nuptials before he tells the story of ‘There She Is’, written for his new wife. It’s likely to raise a chuckle. The message he leaves his audience with comes in the form of closing track ‘Be More Kind’, which seems to have soared in relevance over the last few months.

An album like Live In Newcastle, a recollection of the magic of live music, is necessary for a time like this

Such positivity is still abundant in the mission statement behind his lockdown project, #IndependentVenueLove.  The virtual gigs initially started as a way of Frank raising money for the eleven members of his “touring family” who were facing economic hardship in the wake of the coronavirus pandemic. This then evolved into fundraising for venues who are “staring into the abyss” of prospective closure. The project has raised over £10,000 so far and has already helped to save the Joiners’ Arms in Southampton from shutting down.

“I’m told by the people running these venues that [we’ve raised] enough money to keep a venue with its head above water till September or later, and that’s a wonderful thing,” he says. “Without these places, there is no circuit for underground music to exist. It’s been great; I have been astounded by people’s generosity.”

Frank’s bassist has been running a charitable initiative of his own. He runs a business called Vans For Bands, which provides tour buses for bands to travel in while they are on the road. Now that they won’t be in use for some time, they are instead being used to give frontline NHS workers a place to get away from the hospital to relax and decompress before they have to return to their shift. Frank intends to fundraise for them alongside his own project.

“My original plan before the lockdown kicked in was to record an album in the summer and then get it out at the start of next year. I don’t know if that’s still going to happen”

Whilst his live album bucked the trend of coronavirus-related delays, Frank’s future projects may not be able to do the same. He admits the situation is a “scary time” for him as someone who makes his living from music, especially in relation to an industry that is probably at the back of the queue for relief from the government.

“It’s very difficult to make long term plans,” he remarks. “My original plan before the lockdown kicked in was to record an album in the summer and then get it out at the start of next year. I don’t know if that’s still going to happen.” Nevertheless, he emphasises that the health and safety of fans comes first. “I hope [the end of the pandemic] will come sooner rather than later, but at the same time, we all need to do the responsible thing to try and beat this virus.”

An album like Live In Newcastle, a recollection of the magic of live music, is necessary for a time like this. It’s a reason to smile. It’s a reason to keep your faith in humanity. Frank Turner is a good enough reason in himself. Move over, Dave Grohl, this guy might, in fact, be the nicest guy in rock.