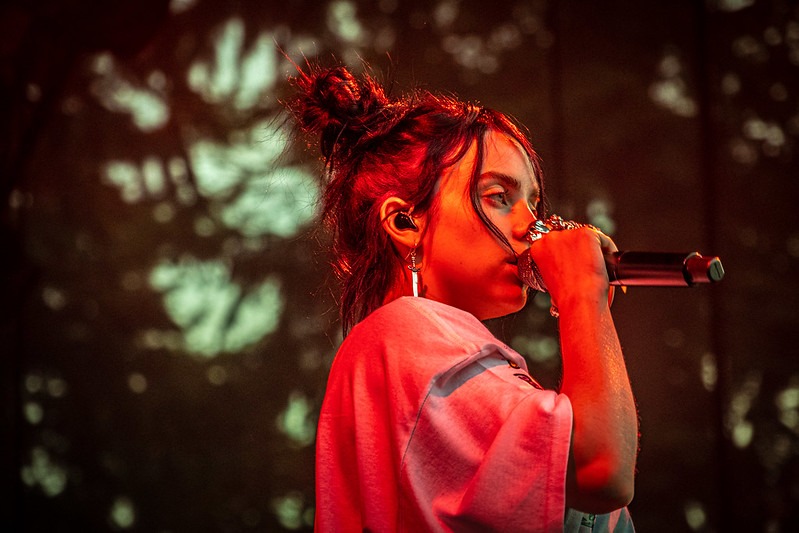 An article penned by Hollie Richardson for the online feminist magazine Stylist caught my eye. Richardson defends Billie Eilish, the American singer and five-time Grammy award winner, on her response to what she perceives as the unjustified and “sexist conversations around her clothes and her body”.

The video in question, which was played during a live performance on the Miami leg of her world tour, depicts her removing her clothes and submerging into a pool of tar. Whilse this spectacle is being played out to the audience, Eilish launches into a lengthy speech, condemning the public’s and, more pressingly, the media’s fixation on her appearance and her clothes.

The problem goes far beyond misogyny

Richardson, upon praising Eilish’s full statement as “incredible”, goes on to highlight several tabloid headlines that prove “Eilish’s point entirely” – rather than focusing on the underlying message of body positivity and female empowerment that the video conveys, they instead hone in on Eilish’s lack of clothing.

She concludes her article by stressing that “Yes, Eilish does take her top off, and it’s another powerful move to further highlight her point. But the objectifying wording and screenshots should not distract us from Eilish’s real power here: her words.”

Although I agree with both the statements made by Eilish and Richardson, there’s a but. Whilst sexism certainly plays a part in the tabloids’ fanatical interest with what Eilish wears or how she looks, I suspect the problem goes far beyond misogyny.

We have developed an unhealthy interest in celebrities

We should ask ourselves why people are so interested in Eilish to begin with – intrigued to the extent that they feel compelled to obsess over her physical appearance and overanalyse her behaviour: even Eilish’s so-called “resting bitch face” is a subject of much discussion. But why?

There’s every reason to be at least mildly interested in Eilish’s life. She’s a talented singer and songwriter and, as this piece of performance art seems to suggest, perhaps has a bit more going on for her than the overwhelming majority of entertainers.

Yet, the question remains- why do journalists write dull tabloid articles about Billie Eilish taking her clothes off? It’s because as a society, we have developed an unhealthy interest in celebrities. When we aren’t worshipping them or leaping to their defence, we’re sparring via social media over utterly meaningless feuds, elevating pop stars to the level of philosophers and cultural critics, engaging in debate after debate about their sex lives. Worse than that, we’re thrusting kids into such an environment that they’re too young to understand what they are getting involved with.

Either listen to her music or leave her alone

Though I do agree with Richardson’s defence of Eilish, she did start off just a tad too sycophantic for my liking: the problem of Eilish being dragged through the tabloids over a bit of performance art won’t be solved until we address the fact that we are far too interested in celebrities. How do we solve this?

Perhaps by recognising that, sometimes, a singer is just a singer, or an actor is just an actor. Perhaps by collectively shaming and refusing to purchase or engage with media outlets that sexualise members of the celebrity classes. All of those options would help someway. All I say is that I wish Eilish well. Moreso, I wish people would stop paying attention to her physiognomy or her fashion sense- either listen to her music or leave her alone.