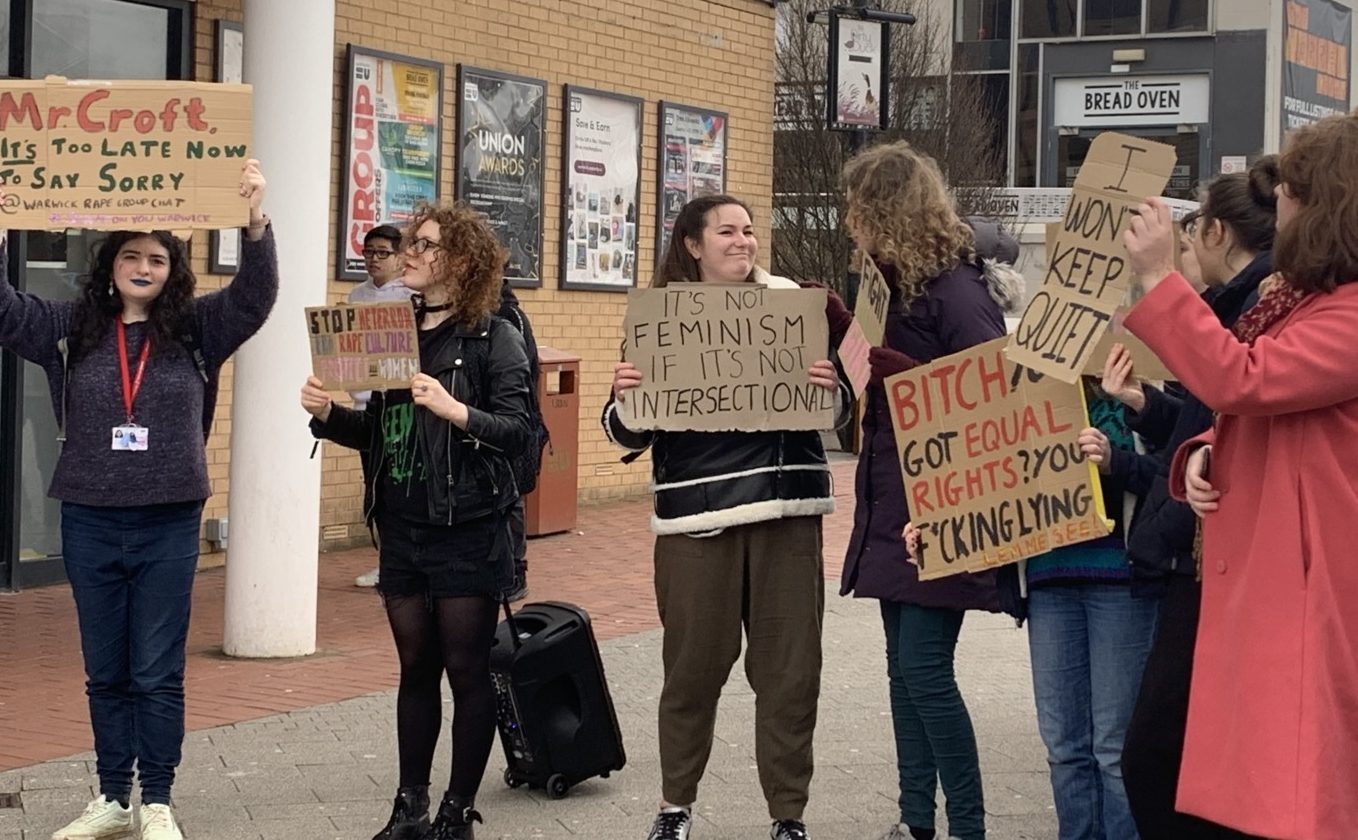 Precious Amara, Warwick Students’ Union’s (SU) Women’s Officer-elect, began the proceedings by informing the crowd gathered at the Piazza that they would be marching to important buildings on campus, renaming them after inspirational women and giving speeches along the way.

Kimia Talebi, one of the incoming SU Environment and Ethics Officers, told the crowd that the University “doesn’t know what’s coming for it”, following students voting seven Black, Asian and minority ethnic (BAME) women into officer roles at the recent SU elections.

The Humanities building was renamed the “Yaa Asantewaa Centre for Liberation”. Rachel Annor-Agyei, one of the incoming Ethnic Minorities’ Officers, explained Asentewaa’s role as the Queen Mother of modern-day Ghana, fighting against British colonialism in the early 20th century.

We have to continue to speak up and to listen to each other. We’re not going to be swept under the carpet the way this University wants us to be

Outside the Library, Precious Amara called for the marchers to cause “disruption” in solidarity with striking lecturers, with chants such as “Hey hey, ho ho, gender violence has got to go”.

Then, the Library was renamed by the marchers in honour of Malala Yousafzai, the Law School in honour of Harriet Tubman, Warwick Business School (WBS) after Assata Shakur and Scarman House after Silvia Rivera.

At the Lord Bhattacharyya Building, members of Warwick Anti-Casualisation spoke about Gayatri Spivak, a subaltern studies scholar who they named the building after.

The speech was interrupted by an onlooking member of staff, who responded to the marchers’ claim that “students don’t have access” to the building, arguing that a “whole area” of the building “is for student projects”.

Precious Amara responded to the staff member, “what about the rest of it?”, to which a number of the marchers began to shout “This is our University”.

In response to the marchers’ questioning of the building’s use, a spokesperson for the University stated: “The Professor Lord Bhattacharyya Building houses the National Automotive Innovation Centre (NAIC). The NAIC creates and develops novel technologies to reduce dependency on fossil fuels and to reduce CO2 emissions.

There are still countless women and vulnerable people on this campus and this is their reality everyday, and there’s no one protecting them

“As well as housing work on the latest advances in automotive technology, the NAIC helps to develop a stronger supplier base in the UK.”

The marchers reached their final destination, University House, where they stood in front of the foyer which security guards prevented them from entering.

Dr Katja Laug, a member of Warwick Anti-Casualisation, invited others to speak, highlighting a discrepancy between February’s International Solidarity March – when attendees were locked out of University buildings – and the IWD March.

She argued that the University did not see women as being “as dangerous” as “Palestinians”.

Chloe Batten, the SU’s incumbent Deputy President and Education Officer, gave a speech on behalf of the National Union of Students (NUS) and the Women’s Strike Assembly, to support striking workers on International Working Women’s Day which is also on 8 March.

She told the crowd that the reason staff are striking across the country was because “universities are a hostile environment for women, cis and trans, queer people, and people of colour”, going on to say “we are struggling […] for a black, queer, feminist future”.

Nicole, a former student who was a victim of the Warwick group chat scandal and spoke out last year about the University’s lack of support for her and other victims, also addressed the crowd.

We continue to acknowledge the upset that our actions have caused our community, and we have wholeheartedly apologised and continue to do so

She shared her ongoing struggle with trauma from the experience, and said: “There are still countless women and vulnerable people on this campus and this is their reality everyday, and there’s no one protecting them.

“We have to continue to speak up and to listen to each other. We’re not going to be swept under the carpet the way this University wants us to be.”

She urged the crowd to continue using the hashtag #ShameOnYouWarwick, describing its continued “validity” two years after the news broke as a “tragedy”. The crowd subsequently chanted the slogan and called on vice-chancellor Stuart Croft to apologise to her and other victims.

A spokesperson for the University said: “We continue to acknowledge the upset that our actions have caused our community, and we have wholeheartedly apologised and continue to do so.

“We have been working hard to put right the issues that have been identified. The University’s Council commissioned an independent external review into our student disciplinary and appeals processes, including those relating to sexual misconduct.

“The review was led by Dr Sharon Persaud, and we published the independent external review in full in July 2019. Since then, we have been working hard to implement every one of the recommendations made in the independent review.

“We haven’t stopped talking about this on campus – we publish a quarterly report on our website covering the progress which we are making. We are moving forward, but we are realistic that some of the actions needed will take time; the University is committed to real change and will see it through.”

In response to the march, the University also stated: “The University continues to support the right to, and facilitation of, peaceful protest. The University undertook and supported a wide a range of activities and events to mark International Women’s Day.”