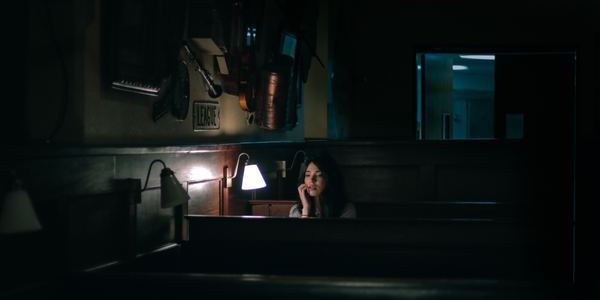 What would you imagine the Freshers’ Week from hell to be like? Rachel Sargeant seems to offer an answer in her psychological thriller The Roomates, set at the fictional University of Abbeythorpe and written from the perspectives of four freshers sharing a flat. Most freshers are dealing with homesickness, hangovers and independence for the first time in the earliest weeks of university, but these girls are dealing with a whole different beast. Not only is there a stalker watching their flat, but after Amber goes missing, the other three have to contend with the mystery of where she is, why she has disappeared, and how they can find her.

One thing I have to praise about this book, first and foremost, is the concept. It comes across as quite refreshing to see the British university experience represented in literature – if we see any fictional depictions of university life in the media, it is often American (Fresh Meat aside, of course), and if we hear about young British people in literature, more often than not, they are younger than the characters we meet in this book.

It’s harsh, it’s raw, and it brings plenty of mystery

Furthermore, it’s great to see this in the context of the thriller genre. We’re used to seeing 18 year olds either fighting dragons, falling in love or exploring their identities. Some great tension is brought out of the fact that the four girls are thrown into situations that people of their age don’t often end up in. It’s harsh, it’s raw, and it brings plenty of mystery.

Unfortunately, there are several things in the book that make it a slight disappointment, the first of these being the writing style. Having read plenty of books in my time, I have read some terribly written ones, and the style here could definitely be worse, but it could also be better. Descriptions are often riddled with clichés – we’re still getting hearts pounding and shivers running down characters’ spines, and it feels like they should’ve been banned from the fictional realm a long time ago. Attempts to make the characters feel properly Generation Z at times also backfire to the point where they become pretentious – Amber’s brief comments on gender politics at one point feel forced and redundant.

While the eventual climax of the book is a particularly thrilling one, the eventual villain reveals little motivation for their unnecessarily cruel behaviour

I also found it difficult to really become attached to any of the characters. Tegan, who early on describes herself as ‘the next Alan Sugar’, particularly irked me – she is constantly irritable, full of herself and never has an endearing moment. At first, I thought she was an intentionally prickly character, and those I can usually get on with in the end, but when nothing seemed to change apart from the evolution of her bond with her younger half-brother, I realised I would never be able to like her. Imo made me feel conflicted – she’d been through the most of all the characters, and for that I could sympathise with her, but it did feel like she literally was her issues. I understand how they could preoccupy her frequently, but I feel like her victimhood was the only side of her personality I saw, more often than not. Phoenix was easier to like, but I did wonder how much the story would really change if she was erased from it. Her own past had little relevance to the plot and she didn’t stand apart as distinctly as the others.

The mechanics of the plot were also problematic, in my opinion. Until Amber goes missing, the stalker watching the girls’ flat seemed to be the focus of the action, but after this point, he is conveniently pushed to the side and seemingly forgotten about, with little resolution. While the eventual climax of the book is a particularly thrilling one, the eventual villain reveals little motivation for their unnecessarily cruel behaviour. “It was for your own good,” is the only explanation given, which is not only nonsensical, especially given what they eventually do to one of the main characters, but deeply unsatisfying.

This sums up my whole view of The Roommates: while not an entirely bad book, it is somewhat disappointing. I’m almost sad I have to say that, given the amount of promise I had for it after reading the blurb and signing up to this review. If it’s a thriller you’re after, you might be better off watching Killing Eve – or if you’ve already seen it, just watch it again. It’s that good.