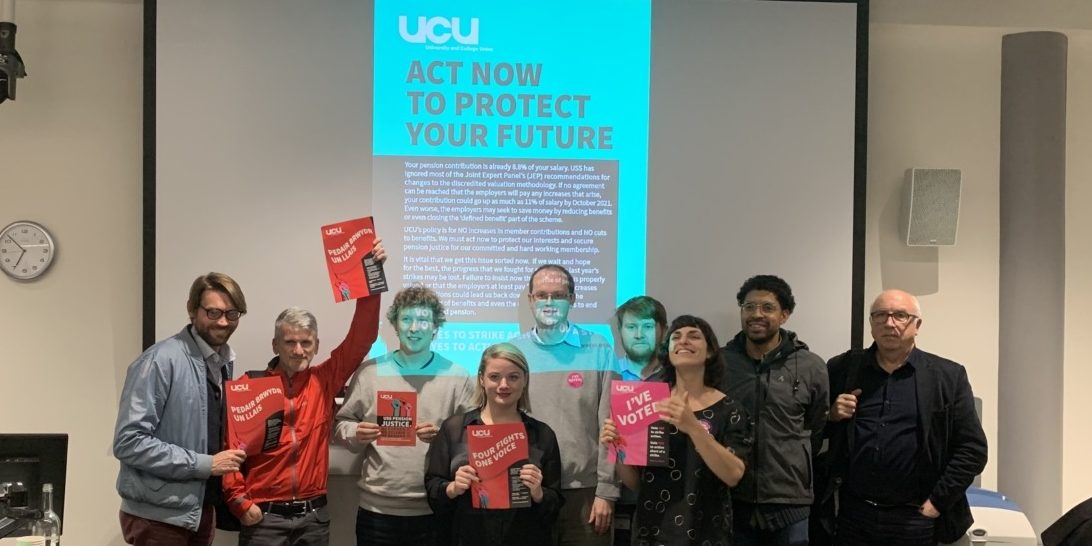 Jo Grady, the general secretary of the University and College Union (UCU), gave a talk about the pay and pensions ballots to staff at the University of Warwick.

Accompanied by Warwick and Leamington MP Matt Western, Dr Grady spoke to over 50 attendees – ranging from heads of departments to those in professional services – at the Oculus Building on Thursday evening.

In attendance included Duncan Adam, the head of Warwick’s UCU branch, who told The Boar that while official data regarding the current voting pattern is confidential, it points to a “strong” possibility of successful ballots.

Dr Jane Hutton, the Statistics professor at Warwick who whistleblowed to the Financial Conduct Authority about the possible overestimation of the Universities Superannuation Scheme (USS)’s deficit, was also present.

The session opened with a talk from Dr Grady, followed by a conversation with Mr Western and concluding with questions from the floor.

Beginning the talk, the general secretary said that while pay and pensions are “separate disputes”, both ballots need a mandate – a majority have to vote for strike action, but the number of votes must also go over the 50% threshold.

The ballots opened on 8 September and are set to close on 30 October. The results of the two strike ballots – one on pensions to the USS, and another on pay, workloads, casualisation and equality – will be discussed on 1 November.

Dr Grady urged the audience to vote, saying: “If you don’t use your voice, somebody else will.”

She stressed the importance of participating in both votes if eligible, as “employers like a divided workforce” and “make deals” with staff on different employment conditions, such as those on “casual contracts”.

Inaction would be “eroding solidarity, as a workforce in the higher education sector”.

“Some people think we’re asking for too much and we should re-prioritise,” she relayed, “I think our demands are very modest. We are making our institutions wealthier than ever.”

The general secretary then turned to another aspect of the pay ballot.

“We don’t have to tell people in Warwick about rates of casualisation,” she said, to the amusement of the audience, many of which were “on open-ended contracts”, and thus “dependent on rent income and other anxieties”, according to Dr Grady.

Employees have been made “the shock absorbers of the business model” in the higher education sector, she added.

“I worry that we’ve accepted this subservient position. Other unions haven’t accepted that and that’s what this union is about.”

Addressing the matter of equality, Dr Grady said that the gender pay gap across universities is “massive”, and in some institutions “can be as high as 20%” yet “employers refuse to publish data” on it.

“They don’t even seem to be a bit embarrassed about the other equality pay gaps,” she stated.

In terms of workload, she asked the audience: “Does anyone think their workload has gotten any better? Did anyone come back from summer feeling refreshed?”

Attendees responded by shaking their heads. The general secretary continued: “We use our annual leave to finish marking. You realise how much marking you have to do, and maybe your increasing workload is just a recurring pattern.”

We’re not asking for immediate action – we’re asking for (employers) to come together with us, to discuss these basic decencies in our working lives

“I didn’t have a holiday my entire career in academia,” she shared. “What we are asking is for employers to negotiate nationally on workload.”

She cited that there has been a 42% increase in staff with mental health issues, and pay and equalities have seen “a decade’s worth of attacks from…employers”.

Moreover, “students prefer expenditure on (staff)” as opposed to buildings that they “will not even get to enjoy”.

“(Employers) are not offering anything to us at all. The only thing that makes a difference is strike action. It’s the incrementalism that has got us to this place and it has consequences.

“What we are asking for in this ballot is to be valued. We’re not asking for immediate action – we’re asking for (employers) to come together with us, to discuss these basic decencies in our working lives,” Dr Grady stated, receiving applause from the floor.

She moved on to speak about the USS, which has seen “detrimental changes in every valuation cycle since 2011 and including the current one.”

The UCU is asking for “employers…to pay for the 2018 valuation and onwards”, as “two years is more than sufficient time for them to get a solution”.

“At the moment, they are making us shoulder those costs ourselves. You will have lost 4% of your pay since picket action, and paid more from April this year,” the general secretary said.

“Lots of members are on the brink of leaving USS” because of October contribution increases, and most of them are also younger members of the scheme. When they leave, it “introduces volatility”.

When they chip away the hallmarks of our profession – such as the right to a contract, a career progression – they are chipping away our ability to do our jobs

“At the same time, the USS has been subject to some very serious allegations,” Dr Grady added, and directed her thanks on behalf of the UCU to Dr Hutton, who received a bout of applause from the audience.

As “employers have dismissed Jane’s allegations and reaffirmed their confidence in USS”, the UCU endeavours to “make employers pay the price” of the scheme.

“We are the ones looking for a long-term solution. We don’t want to be on the merry-go-round after every valuation,” the general secretary stated.

She elaborated that employers “won’t stand by the JEP report that they were so happy to see this time last year”, so the UCU hopes employers will “pledge” with the union “to make systemic changes” in the higher education sector.

“It doesn’t need to happen immediately, but we need commitment from them that it will happen over time,” Dr Grady said.

“When they chip away the hallmarks of our profession – such as the right to a contract, a career progression – they are chipping away our ability to do our jobs, whether it is the teaching that you love, the library that you work in, the research that you do.

“If we let pay further decline, future comrades will suffer from a 20-year pay cut. Casualisation will continue to get worse and inequalities will not be addressed.”

The general secretary added that the National Union of Students (NUS) is “standing shoulder to shoulder” with the UCU “because they know what problems workloads cause”.

She emphasised the need to “tackle the moral stain of casualisation” in the higher education sector, recounting the story of a UCU member who, after a series of “unfortunate life events” and becoming homeless, eventually had to live in temporary accommodation at her university with two children.

Yet “the worst aspect” was the “emotional cover-up of having to come on campus and stand in rooms like this and deliver world-class education, because if you don’t, students fill in the National Student Survey (NSS) and the department receives bad feedback”, but “your salary is dependent on the department’s performance.

“This is about a financial cliff edge. We are asking you to tell your employer that they have gone too far,” Dr Grady concluded. Her speech received a round of applause and standing ovation from the audience.

It was followed by a round of short questions from Matt Western MP, who began by asking how the campaigning was going so far.

“Meetings like this are very important. The beginning of term is not an ideal time to open a ballot…but from what we’re seeing, it’s going well,” the UCU general secretary answered, “there’s no room to be complacent, but there’s a very high level of education among UCU members.”

When asked by the Warwick and Leamington MP on how to keep the student body on the side of the UCU, Dr Grady said that students often ask about how to get involved as they “do really understand that it’s an issue that really affects them”.

“What they want is not another new building but genuine engagement with the staff,” she stated. “What we learned during the USS strike is students actually really like getting involved, they just don’t know how.”

“Their voice is disproportionately heard against ours,” she added, triggering murmurs of agreement from the audience.

She suggested for students to ask questions such as “What percentage of the department is casualised staff?” and said: “We can withdraw our labour for 14 days over four weeks and students are still on our side.

What we learned during the USS strike is students actually really like getting involved, they just don’t know how

“Students don’t see the buildings that are being invested into anyway. I was told that some students got to spend more time with their tutors during the strikes than their two years at university.”

The Boar asked the general secretary whether students in their third year at Warwick will be as supportive if strikes were to happen, as they have had their seminars cancelled from strikes in their first year.

Dr Grady responded that it is imperative students do not allow themselves to be “used as a weapon by the University”. While they may not be “on the picket line waving flags, they can be a very valuable voice”.

“Things are not going to get better in the longer term if we don’t act now,” she continued. “Most students probably don’t even know there’s a ballot right now.”

She supported students lobbying for compensation following the strikes in 2018, and encouraged them to do the same in the event of possible strikes in November.

After last year’s strikes, 75% of 606 students voted for Warwick’s Students Union (SU) to lobby for compensation in June.

Besides the UCU, UNISON – who represents full-time and part-time staff providing public services – is also balloting for strike action in the higher education sector.

If both unions gather enough votes for strikes, universities including Warwick will see a “paralysis” across both academia and non-academic services, according to a professor who spoke to The Boar.