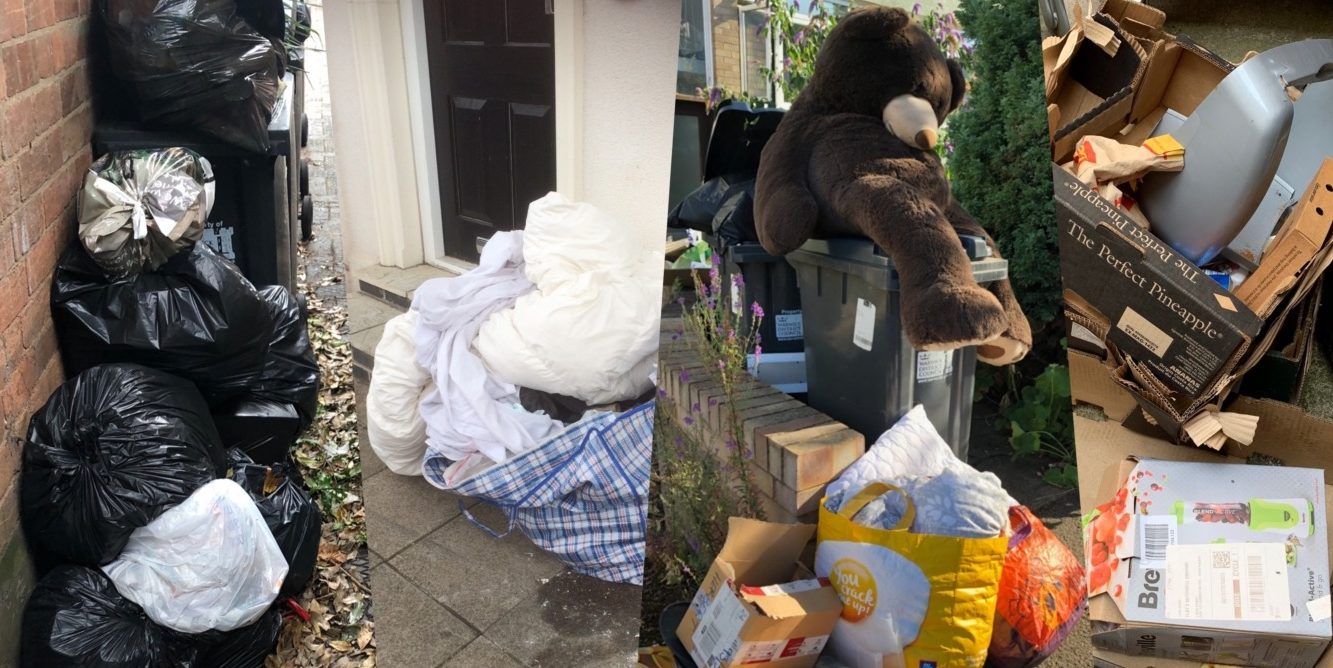 Leamington Spa residents have called on University of Warwick students renting accommodation in the town to move out “responsibly” by donating their leftover items and recycling their waste.

Campaign group Leamington Together first called attention to the issue of leftover items and waste from houses in multiple occupation (HMOs), which are often student accommodation owned by private landlords and rented by property agents. Image of leftover pots taken by Leamington Together.

Accompanied by a photo of pots in an IKEA bag, they said: “The end of another academic year and the entire, virtually unused contents of a shared student house kitchen, are left for rubbish collection.

“What a waste of resources! There’s a plethora of charity shops a stone’s throw away and as soon as the new cohort arrives, they’ll be re-purchasing exactly the same items. There must be a better way!”

The Boar reached out to Leamington Together, who said that the phenomenon is “just a symptom of a far bigger problem” yet “at the moment, no one is being held accountable”. They gave examples of some areas which have been particularly affected by piles of waste and leftover items from student accommodation, such as Clarendon Avenue, Clarendon Street and Oxford Street, but the phenomenon is allegedly not limited to the north of town.

They have observed furniture such as desks and chairs as well as general homeware like duvets, linen and kitchen utensils being thrown away.

In addition to clothes and unused food, small fridges, mixers, kettles and other electrical appliances were also left behind on the streets.

Items of “exceptionally high quality” being leftover is not unique sight at the end of the last academic year or term, and has gotten “worse as there’s an increasing number of HMOs”, according to Leamington Together. When asked who should tackle the situation, they said: “It’s the landlord’s property and he/she should be taking care that this doesn’t happen. Image provided by an anonymous resident on Leicester Street.

“The University and the landlords need to be held accountable. They are both making enormous sums of money out of students, and Leamington has become the student ‘dorm’ of choice.

“Leamington is not even a university town! The student corpus puts tremendous pressure on the town’s resources and services and we get very little back.”

“This is not an anti-student comment, it’s anti-landlord/university,” they clarified. “The latter both act with impunity and with seemingly no consequences, as they continue to rake in the benefits, bearing few if any of the costs involved.”

Referring to Warwick District Council (WDC), Leamington Together said they have “no ‘teeth’” to handle the problems.

They elaborated: “There are regulations against fly-tipping etc, but they are seldom enforced. Because of cuts to local services imposed by central government, there’s a lack of personnel to carry out policy and WDC is loathe to litigate because of the associated costs.” “Some charity shops will pick up large ‘hauls’ of stuff,” the campaign group added, advising students to recycle their items at Princes Drive recycling centre or donate items to charities such as LWS Night Shelter.

They further stated: “I’m not sure whether the kind of students we’re talking about need to save money though. It’s mystifying to those of us who had to scrimp and save when we were at university. A collection of leftover duvets. (Image: Leamington Together)

“This generation of students can obviously afford to chuck stuff out without thought, which tells us that they have money to burn and don’t care about the environment.

“Maybe they are going back home and ‘home’ is overseas. I can see therefore that it would be senseless to ship it all back, but on the other hand, leaving it for the bin men is not the only solution.

“Also, this is technically ‘fly-tipping’. The bin men do not take many of the things that are abandoned outside these properties and that’s why they sit there for weeks.” The Facebook post by Leamington Together, showing a pile of leftover pots, garnered a range of responses from residents.

“This is the worst time of the year for bulky stuff,” one said, whose street was left with a sofa and chairs last year but the council was “not quick” in handling it.

“A few weeks ago a couple of beds were thrown out,” he added. “WDC took over a week to respond.”

Some commentators mentioned organisations such as Kenilworth All Together Greener, Helping Hands Community Project and Action 21, which partner with the University or Students’ Union (SU) to collect leftover items or provide donation services.

Others suggested “free swap shops” where student cohorts can exchange items while saving their budgets, and that “landlords should provide domestic items” and “be responsible for end of term rubbish clearance and recycling”.

The Boar contacted an anonymous Leamington resident who doubts whether students were solely responsible for the leftover items and waste, as they found paint cans and other redecorating tools near their house on Leicester Street.

In the row of 21 terrace houses, there are nine HMOs “with 49 bedrooms between them”.

Students are doing an amazing job in terms of raising awareness about single use plastic and waste production, but it’s upsetting to see all the recyclable waste they left behind Pile of garbage bags in a back alley. (Image: Anonymous resident)

Four of the nine properties are also owned by the same two brothers, according to the resident, who raised the issue of unfit housing and “exploitative” landlords, which former Universities Minister Chris Skidmore addressed earlier this year.

“Students need to hold landlords accountable for renting properties that are not fit for purpose, especially houses with over five occupants that don’t have enough bins, recycling instructions, proper waste storage, and etcetera,” they said. “Report any (houses) that are not suitable. Landlords are making a lot of money from these houses so they should be looking after them. Students need to be more knowledgeable of their rights and ability to complain.”

The resident and their neighbours cleaned “approximately 20 wheelie bins worth of waste, chairs, clothes, crates, boxes” and other items out of their back alley, which took two hours and six adults.

Addressing students, they advised: “Please make an effort to get more informed about how to dispose of waste at the end of the year. Get organised and don’t leave it to the last minute – or leave it as someone else’s problem.” The resident added that what “surprised” them during the cleaning process “was the lack of recycling going on”.

“It was heartbreaking. There were bin bags with shoe boxes in them, for example, which could have been easily recycled,” they said. “It’s quite common sense.”

Touching on students’ proactivity against climate change, they continued: “Students are doing an amazing job in terms of raising awareness about single use plastic and waste production, but it’s upsetting to see all the recyclable waste they left behind.”

Although “students are normally very environmentally aware…some do not seem to follow through with how they live”, the resident stated.

“This needs to change – it is not hard to recycle throughout the year and at the end of the year. Nominate a person in the flat to deal with bins each month.”

“Young people are the future of the environmental movement and they can start by doing that at home,” they said.

The resident suggested that the University can help by “providing students with some information and support” in addition to “signposting them to…the Council”, who “does make an effort to make students aware” but “shouldn’t leave it to the last minute”. Clothes and other usable goods that were binned. (Image: Anonymous resident)

Leamington Together also told The Boar that the University “has expanded so many folds, but is not actually supporting their students”, also putting forward the suggestion of “a free electric bus service”, for example.

“The whole thing is crumbling under the weight that students are putting onto the community, but it’s not the students’ fault – the deprivation of our environment is at the hands of landlords,” they said.

Warwick District Council told The Boar on 1 August that they “work in partnership with Warwick University and Warwick Students Union to proactively plan a programme of communications to students over the summer, to help them prepare for moving house”.

“This includes a dedicated social media campaign in conjunction with the University & Students Union accounts; a direct email to all students based in Leamington with advice on recycling, bulky waste collections and charities that accept donations; and a letter to all known student landlords in the area. We also do the same for incoming students who are new to the area, advising them on collection days and how the red box recycling scheme works,” they said.

“In addition, the university this year paid for an additional waste collection for student properties in Leamington to assist with any excess waste which was well used, with around four tonnes of rubbish collected.

“We appreciate that there have been instances where some properties have left additional waste at the roadside and we will take this on board as we plan for the future.” Incorrect waste sorting*, according to Leamington Together.

*All of the photos were taken outside various student accommodation around Leamington. Regarding waste sorting, Leamington Together commented: “It seems that Warwick students don’t understand what they can put out, in which container and on what day.

“Refuse collection is once a week and recycling has allotted days on a bi-weekly rota which are communicated by a flier that comes through the door and most of us have affixed to our fridges, so we know when to put what out!”

Overall, “general rubbish” is “a feature outside virtually all the HMOs” around Leamington, the campaign group added.