The University of Warwick is the 21st most international institution in the world, according to the Times Higher Education (THE) World University Rankings 2019.

41% of Warwick’s 19,649 students are international and come from over 150 countries, most significantly from China, Hong Kong, and Malaysia. Furthermore, 42% of all staff have non-UK nationality.

For 2019’s most international universities, the University of Hong Kong came in first place with nearly 8,000 of its 20,000 students considered to be from abroad.

The university aims to become “Asia’s Global University” and intends to give 50% of its undergraduates two opportunities to study abroad during their course by 2019, and extend the same opportunity to all students by 2022.

ETH Zurich came in joint second place alongside Hong Kong University of Science and Technology (HKUST). At the former, over 19,000 students come from 120 countries.

More than a third of HKUST students are from overseas, being home to at least 60 different nationalities. 80% of its faculty members are also international.

École Polytechnique Fédérale de Lausanne (EPFL) and the Chinese University of Hong Kong (CUHK) came in fourth and fifth place in the rankings. Students at the latter come from at least 50 countries around the world.

For universities in the UK, Oxford came seventh in the rankings, with Imperial College London and Cambridge at ninth and 10th place respectively.

41% of Warwick’s 19,649 students are international and come from over 150 countries, most significantly from China, Hong Kong, and Malaysia

University College London (UCL) and the London School of Economics (LSE) are the 12th and 14th most international universities in the world respectively. King’s College London (KCL) followed close behind at 15th place.

The “most international universities” according to THE “all have a high proportion of international students and staff, collaborate on research with scholars from across the world and have a strong global reputation to match”.

With regards to Warwick’s ranking this year, Renesa Rastogi, a Politics and Sociology student from India, described the university as “very intersectional” and added: “There are many people from different cultures around the world, so you integrate and learn so much about different cultures and societies.”

Management student Devyangana Sagar who is also from India said: “It’s quite fascinating how there are people from all across the world and yet Warwick feels like home. A home away from home that connects like-minded people over academics, sports or extracurricular activities.”

An international English Literature and Creative Writing student at Warwick also commented: “You can tell that Warwick is very international just by walking around campus. To be honest though, I feel like it can do more with and for its international students. At times I’ve also felt ostracised by UK students and staff – some of them can come off as very unwelcome.” 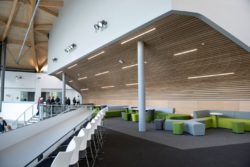