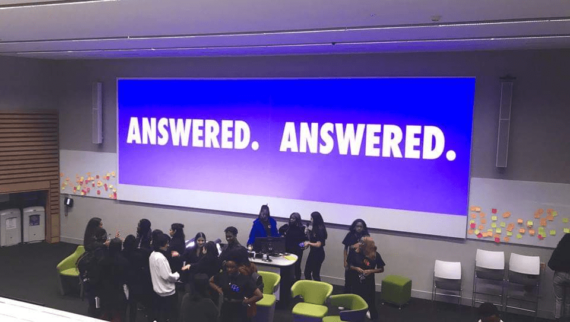 CHL Warwick 2018 was held on Saturday 24 November in the Oculus Building. Hosted by third-year Sociology student Seyi Alawode and her team, the event is Warwick’s first student-run creative careers conference.

#CHLWarwick 2018, originally named “Create Her Lane”, saw three panels each consisting of three to six creative industry leaders, who have worked for companies such as the BBC, Google, Amazon, ASOS, and Spotify.

As the first creative industry conference at Warwick, it hoped to “bridge the awareness gap” between students and the creative sphere, since there currently exists a “lack of support for creators”.

According to the conference, 60% of jobs in the creative industries are not advertised publicly, and it is “a matter of who you know” to find necessary support. Moreover, 90% of entrepreneurship opportunities fail; #CHLWarwick 2018 aimed to tackle these statistics.

It provided students that were curious about creative careers – ranging from marketing, to technology, to journalism – CV tips, insight, mentoring and networking opportunities, from recruiters and entrepreneurs currently in the industry.

Three panels were introduced during the day: “Working at a Creative Company”, “Female Entrepreneurship”, and “Navigating the Industry”. Each were followed by a question and answer session with the audience, and networking intervals were provided throughout.

The presenters include: a creative strategist for Spotify UK; two executives from Design Bridge; the Chief Executive Officer (CEO) of Hustle Crew; the founder of Amy Meadows Events; a director at MAIA Productions; the founder of Life Talks UK who is also a manager at ASOS; the co-founder of Vamp Agency UK; and more.

The panel also had Warwick alumni, such as Ashni Lakhani, who is currently a producer for Stories. She finished her degree for History and Politics at the University in 2016.

Scarlett Clark, the CEO of the Smart Girl Tribe and a panelist at the event, spoke to The Boar about her journey to becoming the UK’s top female empowerment station.

Someone should change the system. Someone should have different conversation. I realised that I am someone and I could, so I did. I’m just a girl who decided to go for it

Explaining her motivations, she said: “Too often, being a young girl, we get used to the problems that are thrown at us, and people saying, ‘that’s just part of being a teenage girl’.

“Someone should change the system. Someone should have different conversation. I realised that I am someone and I could, so I did. I’m just a girl who decided to go for it.”

She stated that it was challenging to ask “questions that teenage girls weren’t asking” when she was 19, and give ideas that “a lot of people [had to get] used to”.

“I’ve just been a girl who has never listened to anybody who said no. I think perseverance is the trait that always sets me apart the most as to why I have succeeded,” she continued, “I really want to be living proof that you don’t have to stick to society’s parameters.

“As women, we’re constantly seeking either validation or permission. We’re convinced we’re not smart enough, we’re not talented enough, we’re not pretty enough, our following is not strong enough, but we have to change that conversation.”

Despite dealing with this negativity on a “daily basis” – on both social media and from people she knows – she sees it as “a new opportunity to prove someone wrong”.

The Boar also spoke to Joyce Kremer, part of the SheSays committee, founder of Art seeks Copy / Copy seeks Art, and one of the panelists for the conference.

She reiterated the importance of the promotion of creative careers, “because there are all these career fairs, but they never have anything about creativity”.

She identified that the key problem was a lack of awareness about opportunities in the creative industry, which has been “shielded” and relies on people in the industry – which can be entered into through “many different means” – sharing their experiences in person.

Joyce learned of #CHLWarwick2018 at a networking event by SheSays, where she met Seyi Alawode, the organiser of last Saturday’s conference.

After the event, The Boar spoke to Seyi, who pioneered the idea with her team. She came up with the idea of a creative careers conference after her experiences in first and second year, when she was met with dead ends during internship application season.

She shared: “I looked into law, consultancy, but felt that none of the support that was provided – or the culture here at Warwick – allowed or catered to what I wanted to do or my skill set.”

In her second year, she organised her first panel which consisted of seven panelists. They explained their work, and gave accounts of their experiences in different industries.

Reflecting on how her first panel went, Seyi said: “From then I thought, okay, there’s obviously a demand for this. Not a lot of people turned up, but so many people messaged me afterwards saying, ‘oh my god, if I knew about I would’ve come!’ So I thought, why not just do it bigger and better? Perhaps impact more students.”

“What better way to do it by having it by students, for students, you know?” she added. Her goal was to increase the “representation of alternative careers”, since “there isn’t much of that, especially at Warwick”.

CHL stands for “Create Her Lane”, which was then abbreviated. Explaining this decision, Seyi said: “For the first panel I did in my second year, I wanted it to just be women. I know the creative industry can be a hard place for young women, and women of colour.

I really want to get rid of the corporate culture here. So by all means, I will do it. It’s so pervasive to me, and it’s – for a lack of a better word – sometimes toxic

“From then on, I just thought, you know what, I’ll open it up to everyone. I thought it would be a bit selfish of me to exclude people. We marketed it as ‘CHL’ so that people wouldn’t be deterred.

“We wanted to open it up to everybody, because we had quite a good panel, and we felt that everyone needed to hear what they had to say. ”

When asked about how the event was organised, she described the process as an “absolute nightmare”. She revealed: “I started organising it in August. From then on, I just went crazy. I went to as many networking events as I could in London.

“I was the only student in each and every single one of those events. But it was pretty much about putting myself out there, and not being scared of asking for an email, because you never know who can help you.”

She eventually found all the panelists from networking events. “It was so out of my comfort zone – but if you never do it, it will never get done,” she concluded.

To Seyi, the event went “better than expected”. Further elaborating on her experience as a liaison, she said: “Each contact you get and each email you send out, you will be remembered as a student. What I found is that a lot of people want to give back to students.

As Seyi is currently in her third year, the event may not continue in the coming academic year. However, it will continue next term, and there are “really exciting things lined up”.

Regarding her motivations, she disclosed: “I really want to get rid of the corporate culture here. So by all means, I will do it. It’s so pervasive to me, and it’s – for a lack of a better word – sometimes toxic.”

“I want to create a space where other people can do other things. You can be a Warwick engineer and go into radio if you want to, but people here don’t think that. I will keep it going as long as it works to reverse corporate culture, and create other stuff for other people.”

To read a full interview with Seyi and find out more about her work, please visit this article by The Boar Arts.