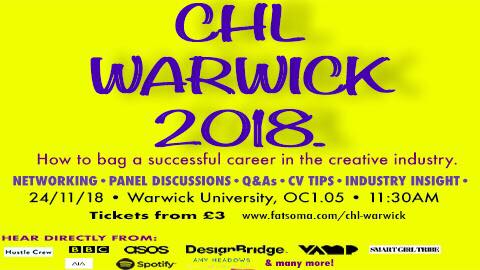 An interview with Seyi Alawode, founder of Create Her Lane

Everyone knows that the arts are hard to break into. It’s one of those industries where you just have to know someone and get a lucky break. Now, a third-year sociology student is here to change that, with a creative careers conference called ‘Create Her Lane’ taking place on Saturday.

Seyi Alawode started Create Her Lane in her second year. “I founded it because I felt as though certain alternative career paths weren’t catered to here at Warwick. I remember in my first year wanting to do a Spring week, because there was that pressure to succumb to finance and consultancy and all the big-grab city jobs. But I didn’t feel I had the skills that were aligned for that sort of career. So I thought to myself, okay, well I’m definitely not doing law, I’m not doing engineering, definitely not finance – where can I fit in?”

“I discovered this year that there are so many roles available in the creative industry that we don’t seem to know about here. I don’t know why that’s the case, it just seems that if it’s not corporate, it’s not important, and I want to change that.”

“I remember in my first year wanting to do a Spring week, because there was that pressure to succumb to finance”

When asked if this is something the University needs to improve on, Seyi is quick to acknowledge the difficulties. “To be fair,” she points out, “they did have the creative careers fair this year, which I thought was really good – it was refreshing from Warwick. But I feel like they need more. I know it’s often out of their control because it is easier to get sponsorships from big city firms, but they need more representation, maybe hosting more networking events, for tech, or marketing, or journalism – it’s not all about finance. It gets a bit boring.”

Seyi also wants to make clear that, despite the name, this is an event for everyone. “I named it in my second year because what I wanted to tackle partly was the fact that women are so grossly underrepresented in the arts industries. I wanted to create a safe space where women could come in and talk about their different experiences in the industry to female students and encourage them, and we can learn from them. But this year, we wanted to open it up to everyone. So the panel is female, and we do prioritise the wellbeing of women, but I thought everyone could do with a bit of alternative career advice, so why not just open it up to everyone?”

“I thought everyone could do with a bit of alternative career advice, so why not just open it up to everyone?”

This year’s Create Her Lane event is set to be even bigger and better than last year. “Last year we had seven panellists, it was quite small. This year we tried to go as broad as we can. One thing that I have never seen at Warwick is anyone come in from advertising – never. I know in this day and age advertising is becoming a lot more popular, so we thought: right, get advertising down. We wanted journalists, tech, marketing (WBS just had a marketing fair, so there’s obviously demand for it). We’ve got production and film-making, dancing, styling, direction – we just tried to go as broad as we could, because the more people we get, the more people we cater to. I thought, let me just try and search, and see who I can get in touch with.”

Seyi says she had both positives and negatives throughout the experience of organising the event. “It was an absolute journey. I started planning this year’s event in August, and it’s been hard. I’ve had to make a lot of expensive trips to London. But knowing that you’re doing it for a good cause and that it will help people kept me going. I don’t know what it is about being a student but everyone just really wants to help, and it’s nice seeing how willing they are. That kept me going as well, the fact that I’m not the only one who sees that there’s a gap, and I’m not the only one determined to bridge that gap.”

“We’ve got production and film-making, dancing, styling, direction – we tried to go as broad as we could”

I asked Seyi if she feels that the economic and geographical barrier is a problem. She says: “It’s really tough because London is the heart of the creative industry. But there is an economic barrier. For a lot of young people, it’s getting harder and harder to survive in London. More and more people are moving out, more and more people can’t cope. There isn’t enough representation of the working-class because not enough people can afford that London lifestyle.”

This is something that the panel is trying to tackle. “We’ve got people coming who work in Birmingham and Oxfordshire, and it has been nice hearing their experiences because, obviously, the majority of the panellists are coming up from London. Maybe we can figure out a way to help people who are faced with the issue of not being able to afford that London lifestyle and come up with solutions.”

“I don’t know what it is about being a student but everyone really wants to help, and it’s nice seeing how willing they are”

It is clear that Seyi is extremely passionate about this project, and this can be seen in her enthusiasm about the panellists. “There’s a lot of women on that panel that inspire me – all of them do – but there’s a particular woman on the panel who’s 23 years old. She started this glitter brand called Go Get Glitter when she was about my age, and the way she’s handled her business is so inspiring. It’s gone global – she got booked in to do some glitter makeup for celebrities at Coachella. It’s so refreshing to see her breaking boundaries because you don’t really expect that, as someone so young, and a woman as well. When my friend told me about her I just thought I have to get in contact with her, I have to hear her story. She’s called Holly Pollack, she seems like a phenomenal woman, and I’m really excited to meet her.”

I asked Seyi what she thinks the biggest benefit will be for students attending this event. She says: “From a student perspective everyone’s going for networking’s sake. Everyone wants to get a lead, even if it’s just an email, a piece of advice, or a contact or referral. Even if I wasn’t organising it I would pay good money to go and see this, because it is nice for Warwick to see that change. So I think a lot of people are looking forward to just seeing what it’s like, because we have no idea, no one’s done this before.”