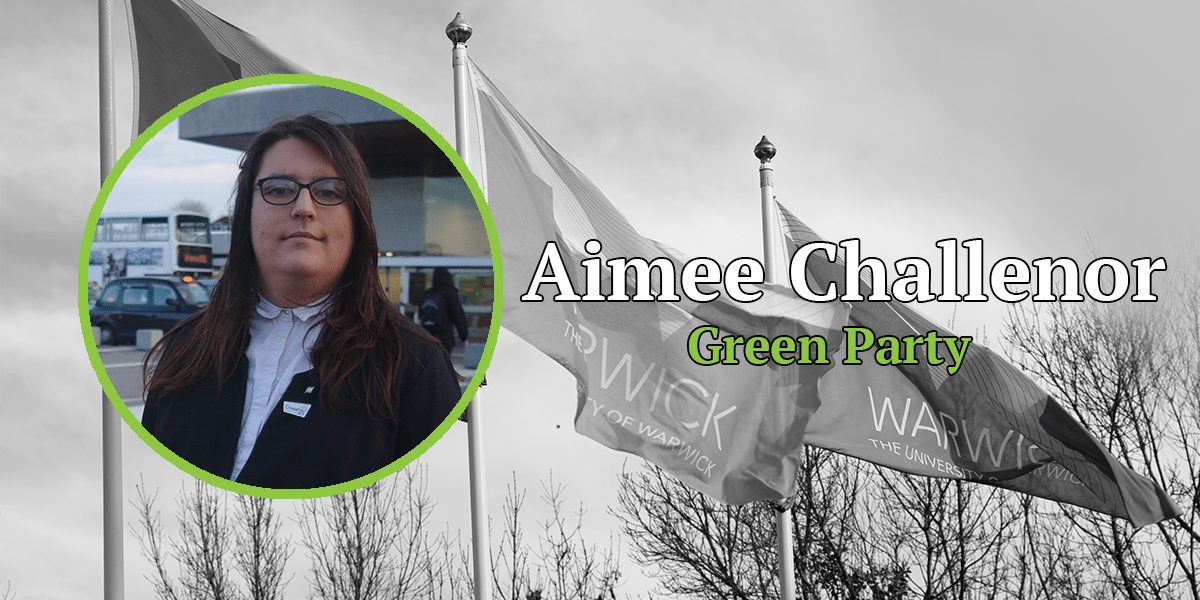 The Boar interviewed Aimee Challenor, the Green candidate for Coventry South in the upcoming General Election.

The Boar: Times Higher Education have recently announced that the University of Warwick is the 17th most international university in the world. How would you take these students into account when looking at Brexit negotiations, especially considering the possible decrease in international students in the coming years?

Aimee Challenor: “The Green Party are advocating for the rights of EU residents in the UK post-Brexit, including Students. No one’s lives should be used as bargaining chips. We’re also pushing for a second EU Referendum at the conclusion of the Article 50 negotiations so that we can vote on the final deal. I’m proud to stand up for what matters: a truly outward looking, prosperous society where businesses and the environment thrive whilst working for the common good. I’m proud to stand up for promising existing EU nationals the right live in the UK, for retaining the benefits of the single market, and for staying in the customs union. We’ve also committed to allowing 16-year olds to vote in any referendum on our future relationship with the EU because it’s their future that’s on the line.”

“As a young person who does experience mental health problems, I know first hand the issues that we face in the NHS today. We’re seeing waiting lists increase, whilst an extreme Tory government hits the NHS with cut after cut after cut. I’m standing up for our NHS, for our doctors and nurses, and for patients. I want us to have an NHS that is truly in the public hands, and given sustainable funding, not an NHS that is carved up to the highest bidder. A properly funded NHS should have the resources to be able to help not just young people, but all people, who are facing mental health problems. It’s not just about the NHS however, we need to look at the root causes of these mental health problems, in today’s society young people are facing ever-increasing pressures, the way we as young people, are being let down, is a disgrace. The Tories are trying to pursue an extreme Brexit that young people didn’t want and voted against. They are dismantling the services that we grew up with and that have benefited generations before us, things like our education system, and our health care,. They are taking away our opportunities, our security, our prosperity, and our future. At the moment, the only thing that is certain for us as young people, is crippling debt. This must change. It is crucial that our health service is revitalised. It is crucial that Mental Health support is properly funded. It is crucial that we tackle the root causes of some of our problems, for example, the Greens would scrap students fees, and reintroduce maintenance grants.”

“The increasing rate of travel costs is appalling. Private profit is being put ahead of public service. It is now cheaper, quicker, and easier for someone from Tile Hill, and the Warwick Uni campus area, to travel into Coventry City Centre by Train, than by Bus. I should know – I do it. This is another area where we are being let down by those that are supposedly working for Coventry. Getting people using public transport rather than their own cars, is obviously a very Green issue. To help that happen, I’m standing up for a travel system that is accessible, reliable, safe, and affordable. For those that are studying, the Green Party would entitle every young person under the age of 18 and people who are in full time education to free off-peak bus fares. We would also reduce the current cost of bus fares and ensure that it did not increase above the rate of inflation in future, getting sustainable transport, should always be cheaper than getting private transport. It is also important to consider  looking at other travel options including light rail trams around the most frequent routes in the city, these could easily be powered through electricity, and would be quieter and greener than our current buses. It is important that education providers consider how their students will access public transport when planning locations and timings of their lectures.”

Last August, it was revealed that Coventry would resettle the largest number of Syrian refugees in the country. What is your stance on the current refugee crisis, given the amount of work that the Coventry Refugee and Migrant Centre does and the support from the university?

“I am deeply saddened by the ongoing situation in Syria and other parts of the country. I am proud that our city, the city of peace and reconciliation, is offering people who are fleeing extreme horrors a home, a future, stability. But we can do better. These people fleeing horrific experiences often seek refuge here in the UK, with our proud history of welcoming refugees. Instead, they find a hostile asylum process. Their applications are incorrectly rejected. Over 90,000 lone refugee children fled to Europe in the hopes of a better life. That’s children without their parents and their families. The UK originally offered to home 3000 children, which in itself is embarrassingly low, but the Government stopped after only 350. Greens will campaign for the UK to accept more refugees so that more people can be in a safe place. The work of Coventry Refugee and Migrant Centre is essential, I’ve been fortunate enough to see some of their wonderful work, and I would fight to ensure they had more support and more resources.”

“It’s a bad sign that Coventry has attracted this label, especially when we have so much positivity in the City as well! The question is in two parts, so I will answer as such. Given that crime should be seen as partly caused by social factors, it cannot be adequately addressed solely in terms of criminal justice and policing policy. A Green approach to crime reduction therefore places significant focus on the social causes of crime. As well as social crime prevention, this includes a broader range of social policies which will lessen the social pressures, such as poverty, inequality or addiction to illegal drugs, to commit crime. I support the principle of “restorative justice”, which while denouncing the crime, deals constructively with both the victim and the offender. The primary aim will be to restore and, if necessary, improve the position of the victim and the community; the offender will be required to make amends.

In terms of helping people feel safer, then I believe that we can do a lot towards this in six key steps;

Read our other interviews with candidates in Coventry South:

We have also contacted the other parties in Coventry South.