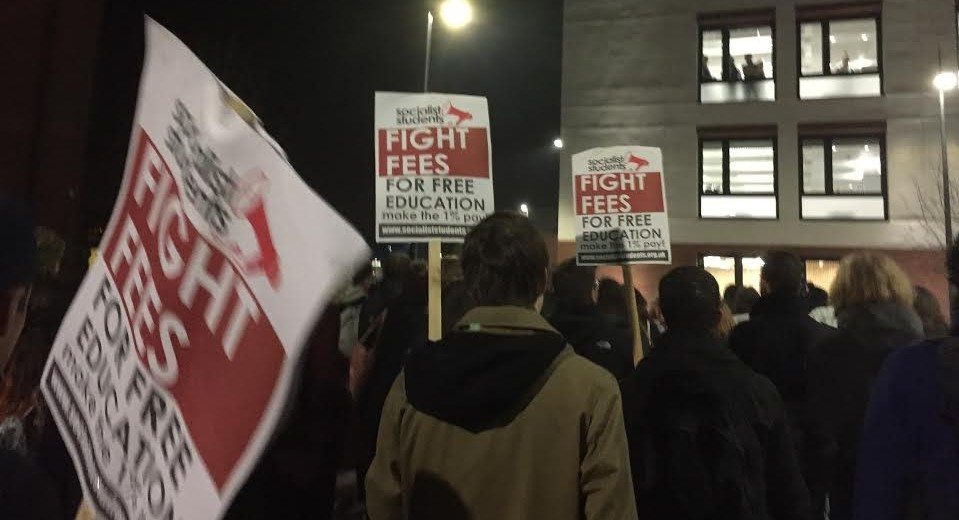 Warwick For Free Education’s (WFFE) Occupation of the University’s new £5.3 million conference facility, the Slate, has lasted a full week as of this morning, Friday 9 December.

The initial Occupation, which began on the morning of Friday 2 December, was bolstered by students who joined following a solidarity march on Monday 5 December.

WFFE have advertised a series of events over the course of the week for students taking part in the Occupation, ranging from a screening of the documentary ‘The Real Social Network’ to strategy meetings and demonstration training workshops.

The event page on Facebook for the first week of the Occupation has been subject to some negative commentary and criticism from other students, however.

At first, WFFE said that Tories were banned from attending due to safe space policies, leading to one student, Sophia Bryant, posting on the event page.

She wrote: “This looks like an interesting event however I am slightly disconcerted at how I am banned because I am a Tory. I am concerned about the future of my university too, and I feel it is somewhat discriminatory to say I’m not allowed because my political views clash with yours.”

WFFE have since changed the terms of their safe space, removing a blanket ban on Tories but including the following groups being banned: “People endorsing fascist, racist, sexist, ableist, LGBTQUA+phobic or Trans Exclusive Radical Feminist (TERFs; people who think trans women aren’t real women) views are unwelcome, as well as University management, cops and security.”

The discussion on the Facebook event was sadly dominated by a tiny but vocal minority of students, mostly part of the University of Warwick Conservative Association. Their intervention consisted almost uniformly of unconstructive trolling.

Other students have not been as measured in their commentary, with Ollie Woolcott asking: “Can’t wait, is anyone still selling q jumps?” Other known right wing students have posted similar comments, including: “Can I join in even if I love Maggie Thatcher?”

A document posted on the WFFE Facebook page detailing what the occupiers needed in terms of food and supplies was also allegedly hacked and edited, with a new uneditable version being posted.

On the posts on the event page, WFFE stated: “The discussion on the Facebook event was sadly dominated by a tiny but vocal minority of students, mostly part of the University of Warwick Conservative Association. Their intervention consisted almost uniformly of unconstructive trolling.

“Tellingly, there has been next to no engagement with our actual demands from these individuals. Instead, they jump on tiny slip ups in a futile attempt to attack and demoralise because they know that we have overwhelming student and staff support.”

In response, the University of Warwick Conservative Association said: “If individual members seek to call out the exclusionary tactics of another political group on campus they are perfectly entitled to do so.”

Some of Warwick’s own academics and lecturers have also given talks at the Occupation, with Pablo Mukherjee, a Professor of English Literature and Comparative Literary Studies, delivering a lecture on Eco-Criticism at the Slate on Wednesday 7 December.

On the progression of the protest, Professor Mukherjee commented: “I am happy to see that the University’s senior management team has engaged in some constructive dialogue with the occupying students.

The issues raised by the Occupation have local, regional and national dimensions and will need all staff and students working together to fight the relentless pressure to diminish and devalue education in this country.

“As the Vice-Chancellor has said, the issues raised by the Occupation have local, regional and national dimensions and will need all staff and students working together to fight the relentless pressure to diminish and devalue education in this country.”

Members of University staff visited the Slate earlier this week.

Peter Dunn, Director of Press and Policy for the University, stated that the purpose of this was to point out that if the Occupation continued a Christmas lunch for 300 Warwick Business School (WBS) Masters students and the staff that taught them, set to take place on Tuesday, would have to be cancelled.

He added: “The occupiers were unmoved by that situation and the Christmas lunch had to be cancelled.”

WFFE have occupied the the facility with three demands:

On the Occupation, WFFE also told the Boar: “The Occupation has been going fantastically: hundreds of students have come in to attend talks, workshops and meetings and to deliver food and messages of support. The solidarity we have built with staff has been a real highlight; our best chance at success comes when students and staff stand united for our demands.

“The University management continues to be intransigent and still shows little sign of negotiating on our demands, despite the support we have from the staff union, the student union, and thousands of others. We continue to call on them to grant our demands.”