Three writers left the safety of their duvets just long enough to write about some of gaming’s most terrifying bad guys. [divider]

Imagine wandering around a dark, foreboding Spanish village, a single handgun for company and hordes of villagers taken over by parasitic organisms rendering them highly invulnerable to pain and very murderous in intent.

Fair enough, you say, but add in this fellow to the mix, and you’ve a different situation entirely. Known as the Chainsaw Man, this character has an increased temper and is very eager to put his weapon to use on the player to extreme graphic effect. His face is cloaked with a burlap sack, his bloodthirstiness is the stuff of nightmares and the mere sound of a chainsaw revving into life is enough to make gamers around the world soil themselves.

Although not the strongest enemy in the game, there is a reason that Leon Kennedy’s head being in the process of leaving his body is one of the defining images of this game, and that is down to this very terrifying villain. You can outrun him for now, but sooner or later, he’ll get you. 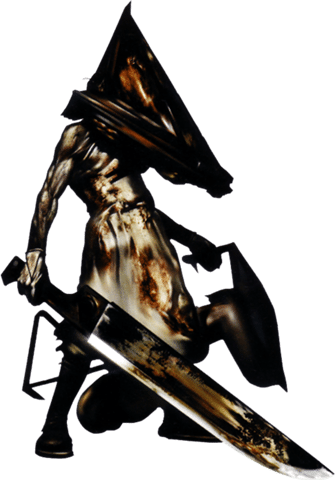 Pyramid Head stalks the streets of Silent Hill and the protagonist James Sutherland, a figure of intrigue and immense mystery and, later on, one of dread and fear.

Equipped with a bloody great knife, this and the unflinching harshness of his angular mask suggest a cruelness to him – a reputation rightly earned due to his role as executioner and punisher.

He is seen engaging with the perturbing spirit of the town, psychologically torturing our hero and the residents – in one scene, he is seen raping a pair of mannequin monsters to punish them.

As a manifestation of Sutherland’s desire for punishment for the murder of his wife, he is inescapable, his twisted actions echoing Sutherland’s dark feelings from the past – everyone could have their own Pyramid Head, pursuing them to torture their guilt for past sins. – Reece Goodall [divider]

It was so hard to pick from the great collection of villains the Metal Gear series has to offer, but Psycho Mantis surely wins out as the weirdest of the lot.

Anyone who played Metal Gear Solid will remember the horror of fighting this psychic boss. Capable of mind control, he’s terrifying from his first appearance. With impossibly skinny limbs, a gas-mask and questionable black attire, Mantis looks like something that crawled up out of your nightmares and accidentally got crossed with a shady magazine from the nineties on the way.

But his “psychic” powers were what made him a truly creepy and memorable villain. His memory-card-reading trick was incredibly startling and horribly sinister – a floating fetishist is probably the last person you want telling you how much you’ve been playing Super Mario Sunshine. The ability to disrupt your game with ominous black screens reading only ‘HIDEO’ leaves you helpless. He’s also got an impressive but scary ability to make your controller leap up off whatever surface you happened to leave it on.

Fantastically creepy, Mantis played with the boundaries of video games as an art form in a way that hadn’t been done before and really hasn’t been replicated since. In doing so he became something bigger than just another on-screen boss. Truly one of the greatest – and creepiest – villains of all time.

Liquid Snake – fondly remembered as Solid Snake’s blonde bombshell twin who stole some sunglasses and ‘played us like a damn fiddle’ – was fairly creepy in Metal Gear Solid. His zombie-like ability to survive seemingly anything was unnerving. Nothing seemed to get rid of this man. Over the course of the game he’s punched from the top of a giant robot, blown up in a helicopter and hit with stinger missiles and still refuses to die.

Liquid is like an odd fusion of The Walking Dead and America’s Next Top Model. Which is just as terrifying as it sounds. But really, Liquid Snake is never creepier than when he finally dies, only to reappear as nothing but an arm.

Most arms are fairly amenable to just staying dead and decomposing nicely. Liquid Snake’s arm, true to form, just won’t stay dead. Only hours into MGS2 it turns up attached to Revolver Ocelot and proceeds to terrorise everybody for two more games. It looks, as I’m sure is unsurprising given that it’s been dead for quite some time, repulsive, and in its spare time enjoys soliloquising about the horrors of war and yelling the word ‘brother’ in a British accent. If that doesn’t unnerve you, I’m unsure what will. Truly creepy. – Luca Ostacchini [divider]

Scarecrow, A.K.A. Dr. Jonathan Crane, comes in second in my personal list of creepiest gaming villains, as he provides one of the creepiest sequences I’ve ever experienced within the superhero/ action genre.

To those who are unfamiliar with who the Scarecrow actually is within the Batman universe, Scarecrow is a villain that utilises a fear-inducing gas to psychologically weaken and disorientate his enemies, something that Batman: Arkham Asylum expressed very well indeed.

In Arkham Asylum, the boss battle against the Scarecrow occurs within a creepy setting that just keeps getting creepier as Batman begins to hallucinate and reality itself begins to shift and warp until you find yourself fighting a thirty-foot, diabolical and creepy as- hell Scarecrow in the midst of a swirling nightmare-world.

I remember jumping and sneaking my way through the environment, heart pounding in my chest, afraid that he would turn around and violently kill me. Those piercing orange eyes; that tattered, hooded costume and the hands made of syringes are why he is number two on my list.

The central villain in Slender, the elusive and mysterious Slenderman, is the downright scariest villain that I have ever encountered in gaming. Hands down, no contest: I hate that guy.

I remember one night five of us staying round my house, turning off all the lights, cranking the volume up as high as it could go and loading Slender for the first time. The ominous booming of the soundtrack, the constant, unrelenting sensation that someone was breathing gently down the back of our necks wherever we went in that dense forested setting and the sheer, heart-bursting mix of terror and panic when Slenderman himself eventually emerged from the shadows was insurmountable.

There is something incredibly simple but incredibly primal about the game, playing upon our own survival instincts to instil terror within anyone who plays it (or maybe I’m just a wimp, who knows?).

My record number of collected pages within that game is seven of eight, and I do not plan on attempting to better that anytime soon, as I don’t think my nerves could take searching that forest for the final page, even for Halloween. The faceless, suit-wearing, predatory, static-inducing, bone-chilling monster that is Slenderman will always be why, hands down, he is the creepiest character in gaming. – Dan Ewers [divider_top]

Which is your favourite creepy video game character? Let us know @BoarGames