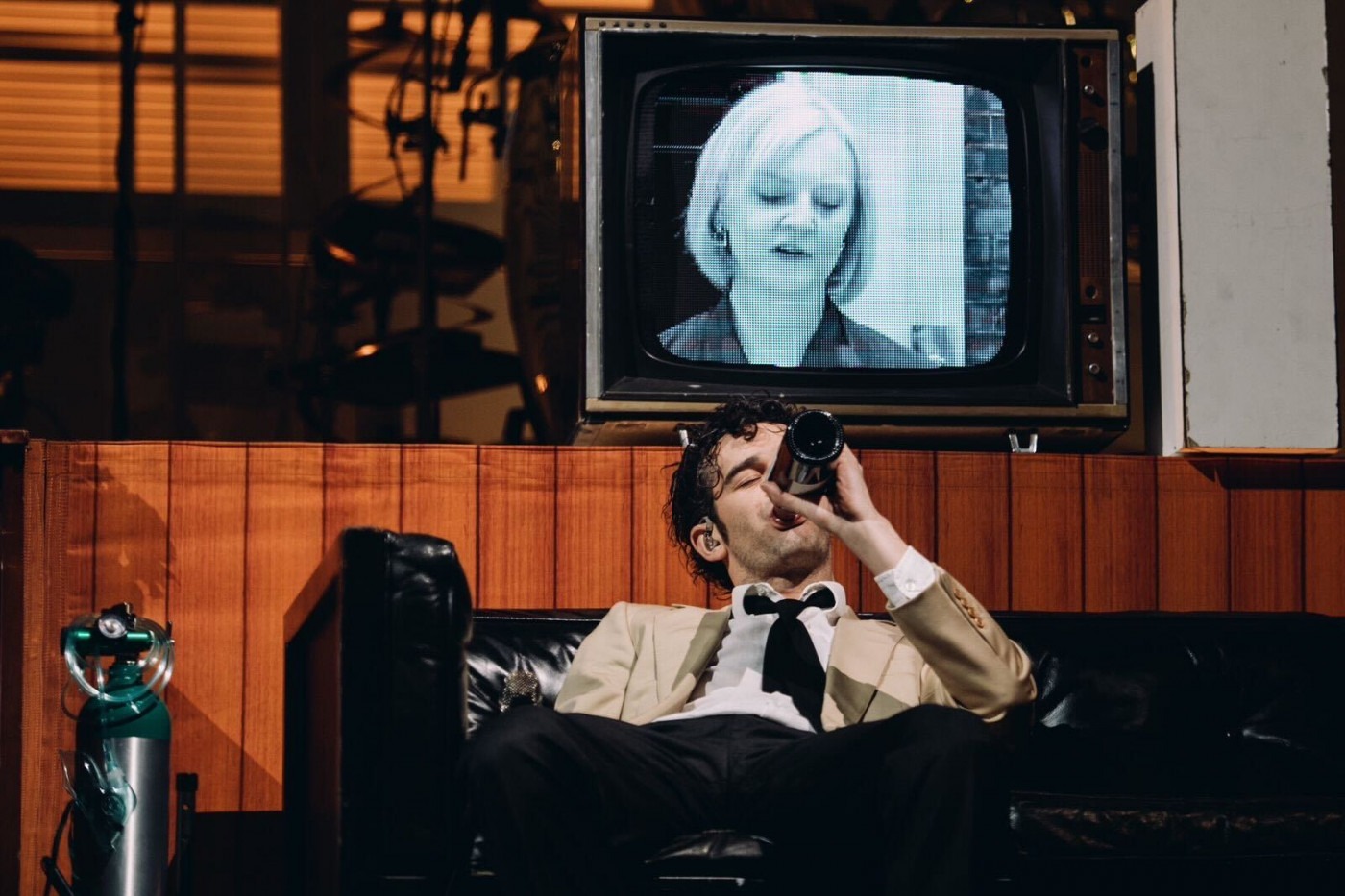 “There will be plenty of dancing songs to come”, opening artist Bonnie Kemplay warns the audience at the end of her set before The 1975 take the stage at Birmingham’s Resorts World Arena. First and foremost, The 1975 ‘At Their Very Best’, is not a concert, but a play. Each “cast” member (or musician) enters the stage one by one to their name being credited on the big screens, lighting the stage with lamps dotted across a set that appears now to be a house. The band settles at their instruments and remove their coats as Matty Healy, the frontman of the band and the show’s director, reveals that he has been sitting on the sofa at the centre-front of the stage through the entire introduction. The keys begin the chords for the Being Funny in a Foreign Language edition of their self-titled song ‘The 1975’. Each album has had a song titled this way but each one is a variation on the last or else a different song completely. The audience’s cheering subdues, and what begins then is “A show within a show, within a show, within a show…”, as described by Healy.

As we follow the repertoire of the band’s newest album, Being Funny in a Foreign Language, more is unravelled about the setting of this performance. Each of the band members occupies different rooms and even floors, often moving on and off the stage, leaving a blazer and tie-wearing Healy to settle in alone with a bottle of wine and a cigarette… or 12. Themes of “vices” are recurrent within the work of The 1975 and this set shines a light on the restraints of society and those just trying to exist and find love within a post-modern world. Healy looks dazedly at an old TV set showing incomprehensible, static images, the details of which will be revealed later in the show. Detail is something of which there is an abundance on the set. Intimate detail is emphasised by intimate videography, down to the intricate detail of a maroon clothbound book titled “The 1975”. The world seems to move slower, and the band on stage seems more paced as Polly Money (a member of the band supporting the At Their Very Best Tour, but already an established musician and songwriter) joins Healy with the lyrics “There was something ‘bout you that now I can’t remember/ It’s the same damn thing that made my heart surrender” during ‘About You’. The part of Healy’s ex is sung by Carly Holt – wife of The 1975’s lead guitarist, Adam Hann – on the album. Money’s vocals are equally as sirenical.

The set seemingly falls apart (with the support of lab coat-clad roadies) and the screens reveal what had been playing on the TV earlier disrupted by static. Images of men such as Putin, Logan Paul, and Prince Andrew are shown flickering towards one of the latter verses of ‘When We Are Together’ to the lyrics “And it was poorly handled, the day we both got cancelled”. As the band have left at this point, the first act of the show closes with Healy’s piano and the line “The only time I feel I might get better / is when we are together” and he then climbs into the TV.

The audience is left with the message: “give yourself a try”

The second half of the set commences with a line-up of songs to bring about feelings of nostalgia for the fans of the band, whose first EP was over a decade ago now. The crowd is full of Matty Healy cosplayers: white shirt and a black tie, a blazer, or leather jacket. He acknowledges the irony of this, and the suggestion it gives about his power over the crowd. The theme of power is one that comes up frequently in the show as Healy demonstrates that he is in charge. Healy gives a woman in the crowd a choice between tyranny and democracy – she chooses tyranny. This is the moment it is decided whether ‘A Change of Heart’ or ‘Paris,’ will be played. Perhaps Healy would have given the audience a choice if the woman had chosen democracy. Instead, the band is instructed to play ‘Paris’. Healy, clutching a bouquet, walks around the stage and adorns each of his bandmates with a rose as he serenades the crowd “how I’d love to go to Paris again”. The direction explored during the performance is experienced by the audience as some sort of social experiment. The hypothesis is that when The 1975 tells the audience to jump, they will jump. And so they jump as high as they can whilst ‘The Sound’ blares through the stadium. Even Hann takes a platform with his guitar in the song to jump for his guitar solo which is all-encompassing for the crowd.

So as the concert comes to an end, the audience is left with the message: “give yourself a try”, as the band plays the song of the same name. All that is the memories of a great concert, with excellent instrumentation and lyricism, and the encouragement to actively criticise society whilst having a good time, and finding love. This is certainly ‘The 1975: At Their Very Best’.