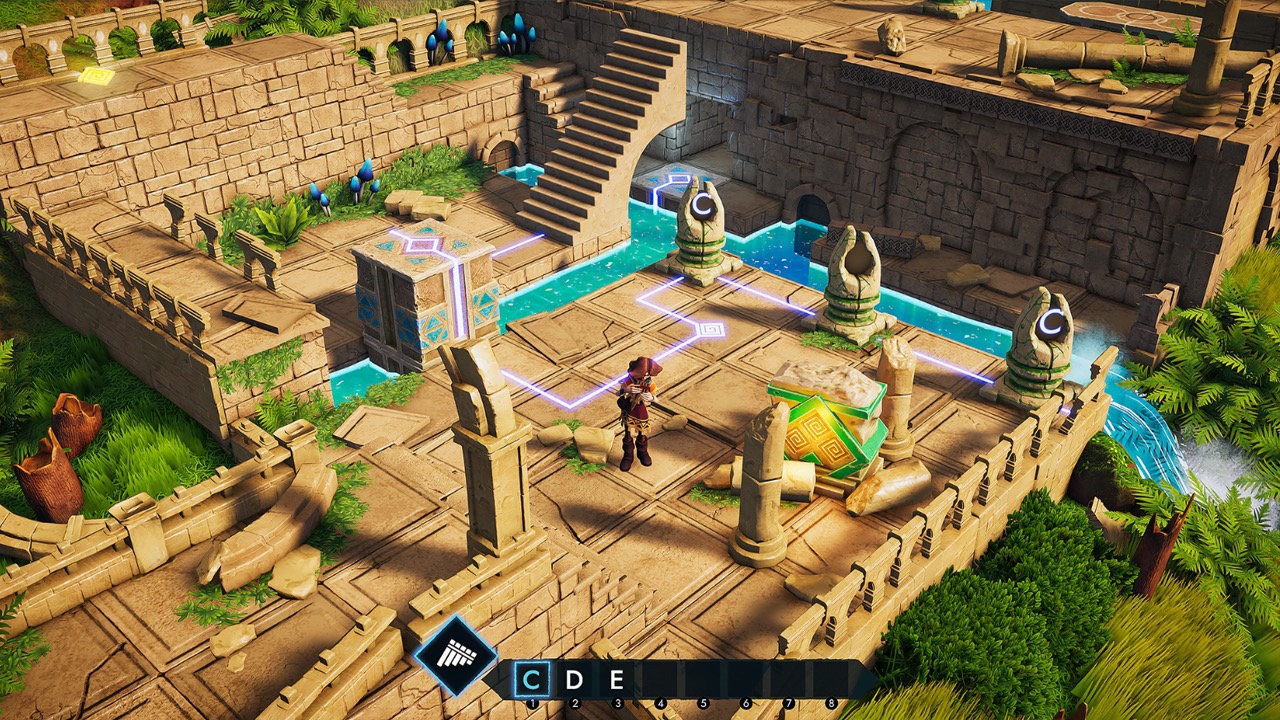 Fantastical ruins bursting with natural colour, talking animals and engaging puzzles – Sonority has all the makings of a wonderfully thoughtful puzzle experience, and hits most of the right notes. The game delivers on its musical premise pretty well, but has a background sense of almost there to the whole experience that stops me ever-so-slightly short of singing from the rooftops about it.

Made by indie developer Hanging Gardens Interactive, Sonority‘s gameplay has the player harness the power of song to manipulate and progress through areas of ruins built around ancient musical magic that was once a bridge between humans and animals. You’ll play as Esther, on a quest to find the notes to a melody that is said to cure illness for the sake of her friend, who happens to be a bear – an instantly loveable premise. Using musical instruments to play different notes, the player is tasked with making tunes that (depending on how much the notes go up or down) will move or turn parts of the landscape in different directions to create a path forward.

It’s a concept that is fairly straightforward and invites in even those not so musically-inclined, like myself, to have a go. In the settings you can change the notes to be referred to by numbers or symbols instead of notes if that’s any easier for you to compute. However, receiving new instruments to play causes the button mapping for each note to shift and becomes a bit confusing. This also wasn’t helped by the display of unlocked notes having numbers underneath – perhaps left over from the original PC version of the game – instead of, say, the Switch buttons. The controls were a less than intuitive system that had me leaving the button guide onscreen for most of the game. On a more positive note, the puzzles themselves increase rather nicely in difficulty with introductions of interesting new elements to think around. Though it seems to be the way of it that the puzzles require a bit of trial and error just to see how to get through, particularly in the final areas.

For a game that’s centred around music, I found myself wishing that Sonority used this aspect of its design with a bit more punch. Notes from puzzles will keep playing after you complete them, adding nice little tunes to the background as you continue on (despite their repetitiveness they don’t become annoying, but are a far cry from a soundtrack). Save for this and general environmental sounds, the focus of the audio is pretty much just on the music of the puzzles. However, sometimes you’ll come across chests that require you to work out a note sequence to open. It was at these kinds of moments that, for me, Sonority came alive.

The actual songs of the game I found truly beautiful, and they add so much more to the experience in the short time that you hear them. They work well to really highlight how much music adds to the atmosphere of videogames and their worlds. Therefore it’s more of a shame than anything that Sonority doesn’t quite manage to integrate this as well as it could. As soon as you walk away from these musical chests – or at one point, rather charming singing rocks with eyes – the songs and all the colour they add to the environment quickly fades away. Of course you’d need to hear yourself play notes for the puzzles, but perhaps the music could have been gradually built up in the background or played triumphantly at the end of a level. Maybe I’m being a bit of a pedant, but with various small elements that could just be a bit better (such as awkward camera movements, freezing character animations, or the aforementioned controls), a lot combines to make for an overall feeling of falling short of its own mark. If I think the most beautiful audio of a music-based game is the singing in the credits, maybe something is missing here.

In terms of its story, Sonority does well at endearing you to the few characters it has through the vibrancy of the world’s design and voice acting. The voice of the raccoon in particular stands out rather well as being perfectly suited for his (at first) grouchy and world-weary character. It is only a short game with about six to eight hours of gameplay, but between him and Esther (and one more character for a very short time near the end), the world does still manage to feel a bit empty. Plus, only seeing the bear I’m supposed to be saving through a drawing and hearing only a little about him, I didn’t find myself particularly motivated for or emotionally tied to the overall story. However, its tension is upped quite nicely towards the end as you get close to your goal, at risk of great danger to the world around you. There’s also written notes and gorgeous mosaics throughout that provide little bits of context as to the history of the areas and the story of harnessing the magic behind music.

It’s clear from the outset that Sonority takes place in a richly crafted and well-thought-out world that is intriguing to work your way through and explore. Its puzzles are unique and do require a decent amount of thinking through, directing this focus well to how effectively the design marries landscape and gameplay to create an engaging and new kind of melodically atmospheric puzzler experience.

A code was provided by Application Systems Heidelberg in exchange for an honest review.