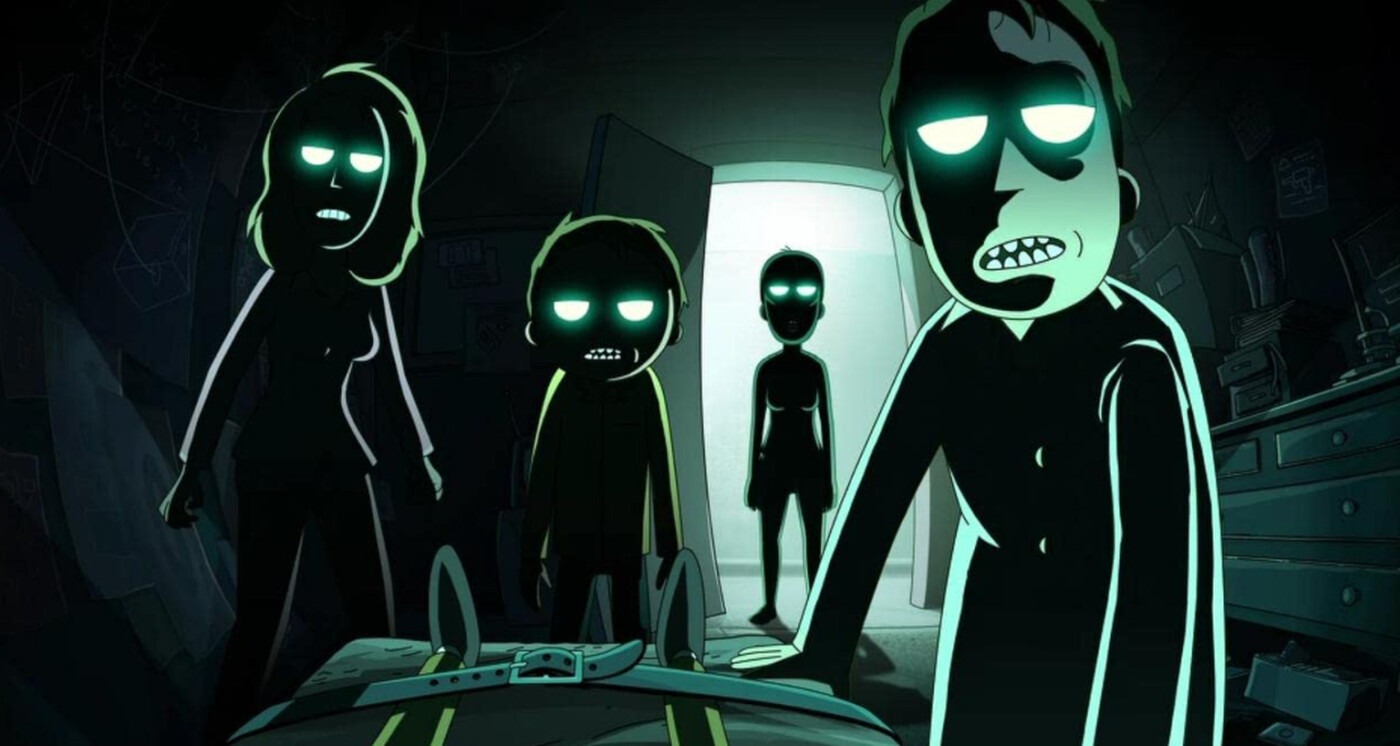 If anyone was worried that stripping Rick of a portal gun would result in less interesting adventures in this sixth series, ‘Night Family’ should strip away any doubts. This is perhaps one of Rick and Morty’s simplest premises to date, and noticeably so after last week’s ‘Bethic Twinstinct’ and the clone romance plot. That certainly doesn’t hurt it one bit – this is a fourth strong instalment in a row. Showcasing the show’s typical inventiveness, and ability to take a novel idea in lots of interesting directions in a tight runtime.

One night, Beth can’t sleep because of Jerry’s snoring – she goes downstairs and discovers a vacant Rick doing exercise on the living room floor. It transpires that he has acquired a piece of alien technology, that allows him to order his sleeping body to perform tasks while he rests, and all of the Smiths want in on it. There are immediate benefits for the family, who become physically fitter and learn new skills. As night falls, the so-called ‘night family’ start to question their side of the deal – tensions soon start to grow in the household, as the waking Rick and the sleeping family go to war.

The idea of being careful what you wish for is a classic horror trope, and one that the family ought to have learned after their iconic encounter with the Meeseeks box in the first series. I mention horror here because ‘Night Family’ truly embraces a horror vibe, and it makes for a very different Rick and Morty. We get an excellent jump scare at the start, and lots of horror imagery, including a terrifying encounter with one of the night people that is framed perfectly (I won’t ruin it, but you’ll know it when you see it). I’ve been skimpy on mentioning the art direction and the music in other reviews of this series, simply because they’re always very strong. However, it’s particularly good here – kudos to James McDermott, and Ryan Elder for a John Carpenter-esque score that worked incredibly here.

A doppelganger set-up allows the voice cast double the opportunity to shine, and it’s seized here. I particularly enjoyed (as always) Chris Parnell’s enthusiastic performance as Jerry, who is thrilled that the night person machine gives him the chance to form a pen-pal relationship with his night self – it’s so in character, and so well realised. On the subject of character work, this episode returns to a side of Rick we haven’t seen in a while – the uber-petty one, and one that is always good for conflict. I sing the praises of all the main cast, though, and I loved the vocal showcase that Grammer gives us here, setting up some interesting dynamics that I’m sure will be revisited.

I will happily admit to laughing out loud when Morty, faced with a major threat, encourages the family to hide behind his abs

‘Night Family’ also works so well because, in the middle of all the horror and action, it’s genuinely quite funny too. There are a lot of great lines and some excellent sight gags that I won’t spoil. I will happily admit to laughing out loud when Morty, faced with a major threat, encourages the family to hide behind his abs – it’s silly and in character in equal measure. There’s also a particularly clever subversion of the typical post-credits scene, and one that is subtly really dark.

This episode comes highly recommended – it benefits from a lot of focus and a script that does something a little different, even as it brings out all of the show’s strengths in the process. It’s a self-contained story that is funny, action-packed and clever, and it brings out superb performances from the entire cast. Ironically, an episode all about falling asleep is too engrossing to miss.